Born on the Bayeux: WWII, another Notre Dame Cathedral and a (really, really) big tapestry (6/14/19)

We wake in the morning, but not too early.  Jan and AJ are providing ‘feedback’1 that this is vacation and we should sleep in more.  So I manage to hold off on the bagel calls and drums until 0830 this morning and we are out the door just a bit after 9am.  Today is our WWII day.  We will move west to east on the D-Day landing sites, starting with Utah beach in the morning then moving to Omaha beach in the afternoon.  It is just under an hour drive to Utah beach and we notice that all along the way there are memorials and monuments decorated with French, American, British, Canadian and other allied country flags (depending on who the memorial was to).  Everywhere.  And museums.  There is a lot of history here.

We were a bit concerned that the museums would be closed today given that it is a major French holiday, but when we arrived at the beach it was filled with people (from all over the world) and the museum was open for business.  Utah beach is both a place (the beach) as well as a museum that gives an excellent overview of the D-Day operation from inception to execution and a bit beyond.  We spent a solid hour or more walking through the museum learning and then walked onto and along the beach.

We eat a quick lunch in the car and then head back the way we came to get to Omaha beach.  If Utah beach was the education piece of the D-Day activities, Omaha beach is more of the memorial to the operation.  There is the cemetery set upon the bluffs overlooking the beach where row after row of crosses march across the landscape.  A simple building close to the cemetery captures the stories of the Soldiers who both survived and sacrificed their lives at Omaha beach.  It is a powerful, powerful place. 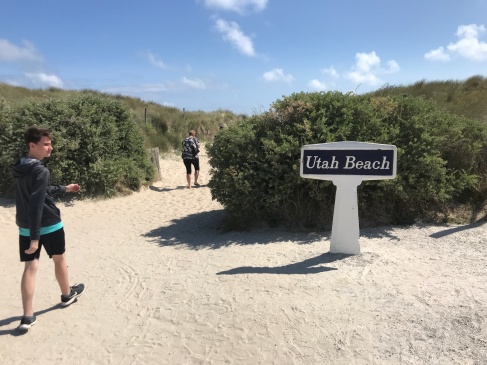 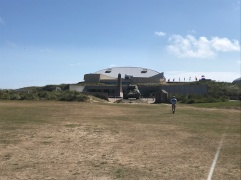 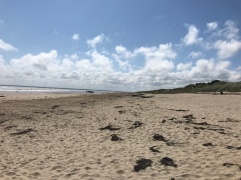 We decide that we should end the day of WWII memorials after Omaha Beach.  There have been a lot of emotional stories and scenes and we head back to our place.  It is mid-afternoon and we have a couple of hours left in the day so Jan and I head out the door to explore our town while AJ decided to bask in the glow if the internet. 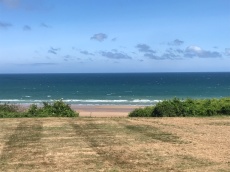 The operations after D-Day that ended the war

First stop is the big cathedral in town.

A short note.  When we came into town yesterday we got redirected off Mr. Google’s route onto some side streets one of which took us right next to this cathedral.  Like literally four feet from the side of the chapel.  So close, should we have wanted, we could have opened the car door, pushed AJ out of the car and he would have rolled and hit the wall.2  And neither Jan nor I can remember passing the building.  Terror makes your brain weird.

The cathedral is magnificent.  Again.  Like all the buildings are magnificent.  And big.  With stained glass, candles, hard wooden chairs that make you wish you hadn’t sinned, statuary and all the accoutrements that make a church a church.  We wander through, check out their basement (we see dead people) and then head out the front door into the sun before we are struck by a bolt of lightning.

We wander aimlessly for a bit and then follow the signs to the Bayeux tapestry.  Which is in a museum not too far from the cathedral.  In our heads, the tapestry was like, well, a tapestry.  Of which we own two and are on our walls.  They are kind of big, cover the unsightly nail holes in our wall and have pretty pictures hand stitched by serfs from the 12th century.3

This thing is narrow–like maybe a foot and a half wide.  But holy crap is the thing LONG!  It is in a glass box that stretches 68 meters.  Which may not sound like much but it is HUGE!  When we got in the museum we were given an audio guide (it was in English, thank the good lord, else we would have been miserable) and the guide walked you along telling you the story.  The tapestry, helpfully, had numbers across the top as well as words, and if you could read weird old latin, you would be just fine.  The whole thing is basically an old school movie for the illiterate people of the time and it was hung in the Bayeux Cathedral (de Notre Dame) every year for a couple of weeks to that everyone could view the ting.  It tells the story of William the  Conquerer (named changed when he became king and in charge of ‘how I should be remembered in history’) and how he came to be the king of England.  It has some juicy bits about Mont St. Michel (which we will get to tomorrow), a sketchy dude name Harold (who was also, for a short time, king of England but was obviously killed at the end of the story:  We think it was because of his name; Harold is just NOT a good name for a king) and more than one phallus stitched into the cloth.  Gotta say that if you had told me that I’d enjoy looking at a dusty piece of cloth I would have laughed, but it was well worth the 10 euros.4

2  Which we would never do.  That would be cruel.  And could leave a mark on the wall.

3  They do not. They were probably made by machine in the late 90s, sold as hand made to American tourists so that the prices could be jacked way up.

4  And how did the NSFW parts of the tapestry get into the thing?  No QC over the thread people? 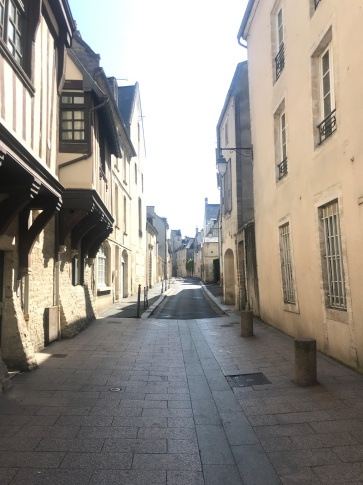