The tool of the day?  Earplugs.

The quote of the day comes from Jan:  “I hate Rick Steves.”
Let me get you caught up.

Saturday morning and the alarm goes off at 0600 and there ain’t nobody happy about it in the hotel room.  We have a 0737 train from Berlin to Munich (München if you are a deutsche sprecher, which we are not) and in Germany, there is no way in hell that a train is going to be an hour late (thank you Amtrak). Two months ago, when I brooked this, I thought that 0737 would be doable…getting up early would be easy, but then again, I’m an idiot.  What didn’t help is that we also stayed up to watch the USA women’s team beat France and I guess it wasn’t so Allez les Bleus!  All of us are cranky, but we gotta train to catch.

We wander across the street to the train station, get us some pastries for breakfast and for some stupid reason, we don’t get a cup of coffee.  The train is at the station at 0715 and we are in our seats ready to rock.

I’m sitting in my seat with by Dbahn (the German train company) app on my iPhone.  It shows me when my train leaves the station, what track it is on, the car we are on and our seats in that car.  It gives me a blow up diagram of the train that shows where my car is and also where that car will be in the station so that I can walk to the appropriate letter (E in our case) and get on the correct car.  Once on the train, I have the e-ticket I give to the nice ticket lady.  It gives me a countdown clock to when I get to my destination (in case the announcements over the car aren’t enough).  It has  a map of the trip and a list of the stations (and times) at which we will stop.  I’m sure that someplace on there is the name of the engineer driving the train and her birthday in case I want to send a present.

On the other hand, When I got to BWI to get on an Amtrak train I looked at the screen and it said ‘delayed an hour’ and that status NEVER CHANGED.  Their app?  Rated one whole star in the apple store.  You can get your tickets scanned, but good luck with anything else. 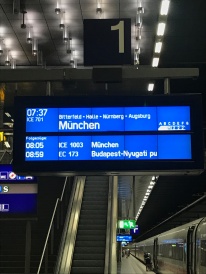 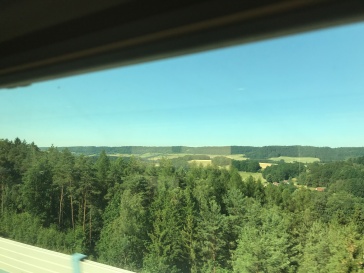 End digression/rant and back to the story.

We take off on our ICE train which is a high speed train that whisks us down to Munich in just over four hours.  AJ and I saw that we hit 220km/hour at one point which is pretty freaking fast.  I watch the terrain go by while Jan and AJ bask in the glory of wifi on the train.  The car is not packed and we spread out to maintain our sanity and arrive safely in Munich just before 1pm.  Where we leave the giant train station and are disgorged into the bowels of hell.  A very hot and very crowded bowel at that.

I exaggerate at bit.  Our second heat wave of the trip has hit and will be with us for the next two-three days.  Munich has temperatures north of 35 and close to 40 degrees, which I’ve heard is really hot and now I can confirm is indeed really, really hot.  We drag our bags four blocks through extremely crowded streets to our hotel; we arrive and the reception desk and our room are at the fifth and fourth floor respectively of a building.  We cram ourselves into a very small elevator, head to the fifth floor, get our key, walk down to the fourth floor into our room.  Which is when Jan uttered her quote of the day, cursing Rick Steves.

Let’s be clear.  We have a long and very fond (if distant) relationship with Rick Steves.  We were introduced to his books back in 2000 when our friends brought one of them along with us on a trip to Prague and we went to all this three triangle places.  Awesome.  We got his Germany and France books for just that purpose–get an idea of good places to see to maximize our time in each place.  When I had trouble finding a hotel in Munich, I used the book to find a hotel.  Which is where we were now.  What we saw when we walked in to this room on the fourth floor of a hotel in a major city in the midst of a heatwave was that there was not air conditioner.  None.  Nada.  Zip.  Not the hotel’s fault, not Rick Steve’s fault BUT I was happy she wasn’t blaming me, so Mr. Steves, here is your bus.

It turns out (and we knew this), that air conditioners are the exception, not the rule, in Germany.  Historically the summers are extremely temperate, cool at night and dry, warm (not hot) days.  But with our climate all jacked up, things they are a changing.  Not quickly enough though to get AC in our hotel, or in most of Munich; we weren’t alone–most of the places were without A/C.  We did have a fan which moved the warm air around the room and we designated a table in the room close to the fan as our ‘refrigerator,’ onto which we put the bottles of water to ‘cool down.’  Mind control baby…if it is cold in my head, it is cold.1

We unpacked and headed out to find some lunch, do some laundry and explore.  We headed down into the tourist section of town and were mobbed by about a bazillion people–so the city is not only hot, but crowded and hot.  We already lost track of days but we’re reminded quickly that it is Saturday, and everyone wants to get out, enjoy the weekend and escape the heat of their houses.  Unlike in Berlin where we had crowds at tourist sites, but could easily get around, the walking part of Munich was jammed with people.  We got some lunch, dropped AJ back at the hotel and we went to do our first load of laundry.

Laundry complete we went back downtown to see the historical sites, listen to a glockenspiel (and we still don’t have any idea what an actual glockenspiel is!), traipse through their market and then head to the Hofbräuhaus, because we are in Munich and who the hell wouldn’t go to the world famous beer hall.2 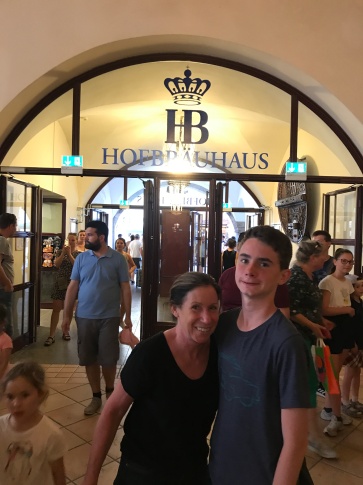 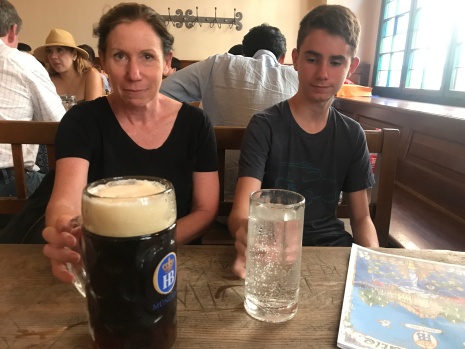 City from the tower

A liter of beer and more heavy food and we are back in the wild.  Eventually we are back at the hotel.  The sun is going down and the temperatures have dropped slowly into the 80s.  We have our windows open to catch any breeze but we don’t feel any.  What we get are the noise from all the people on the street on Saturday night whoooping it up until after 2am and the smell from cigarette smoke wafting into the room from the streets below.  Which bring us to our tool of the day, earplugs.  Jan read someplace (probably on that internet thing), that earplugs were a great thing for a trip.  Especially if you have a spouse that snores–which she may or may not have.3  Turns out they work well to help knock back the sound of street noise while your window is open on a hot summers night.  Maybe tomorrow will be a better day.

1And in my head I’m still 20 something with at least a couple beers left out of a six pack, have a full (not thinning) head of hair.  Power of positive thinking.

2Anyone who doesn’t drink, wants peace and quiet and wants to stay away from crazy people spring to mind.

3Short side note here.  I confess, that I may snore a bit.  Jan has tried many things over the past 20 years to either get me to stop or minimize the noise.  These range from (and I am not kidding) pinching my nose, covering my mouth, pulling out the pillow from under my head, putting her pillow OVER my head (but gently, not in a ‘kill you by smother’ kind of way.  Or that is what I tell myself), nudging me onto my side, poking me onto my side, nudging me with her foot and yelling at me to wake up!  But the go-to solution for the past couple of years is deviously simple.  She shakes the bed.  She doesn’t have to move–she just shakes her body which makes the bed move.  My lizard brain screams “EARTHQUAKE” and I bolt up out of the bed each and every time.  Then I realize that I’m snoring and flop back asleep.  But get this.  In Europe, the beds we sleep in are two twin bed either pushed together or two twin beds in one queen frame.  A fitted sheet covers both mattresses and we each have our own duvet.  Two great bonuses for doing this. First is no fighting over covers–I get mine, she gets hers and she can’t take mine anymore.  And second?  When she shakes the bed, it just affects her mattress and I get to go on sleeping away!

On second thought, this may not be so great.  She may have to resort back to the ‘pinching of nose’ thing.