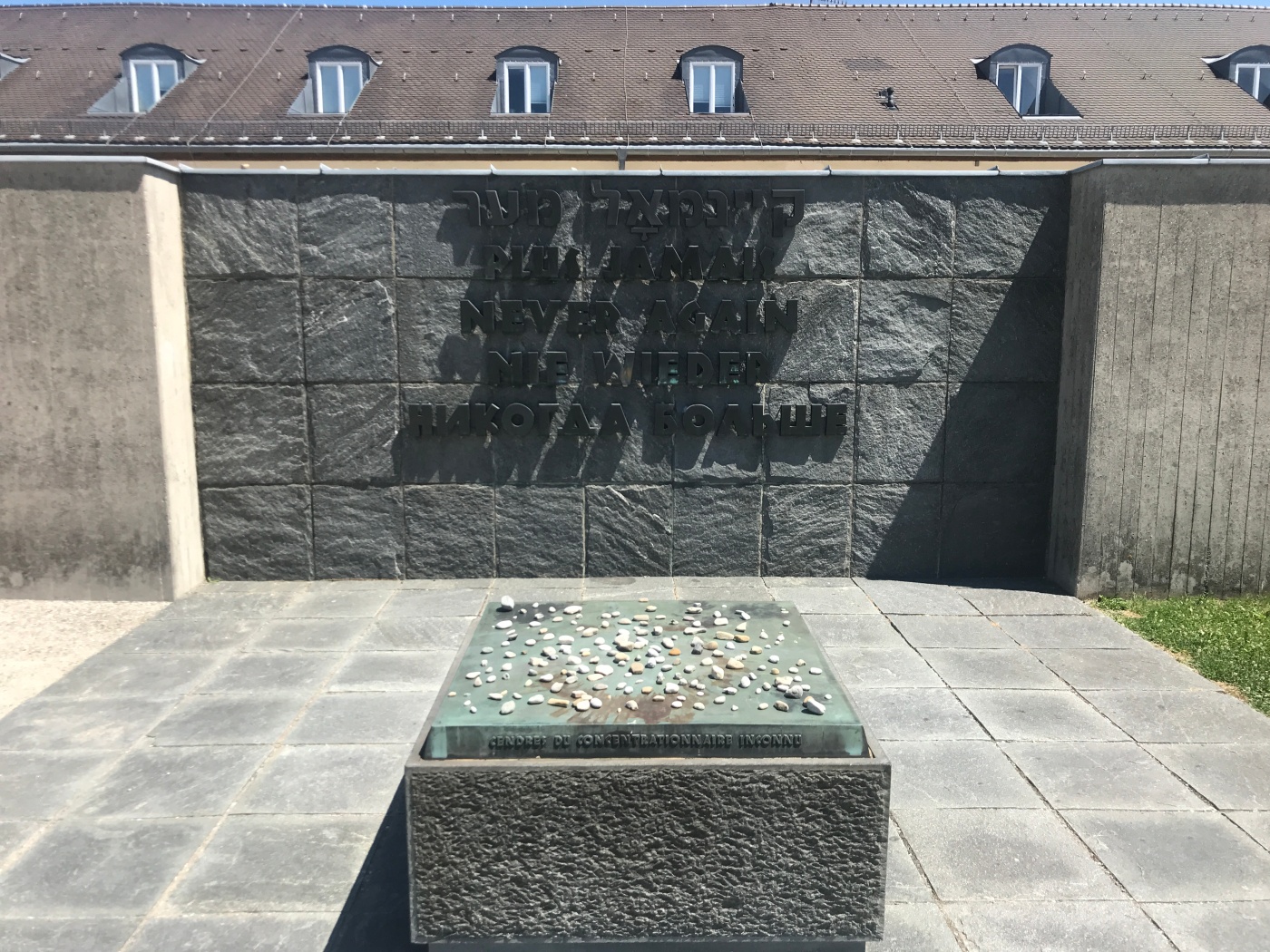 It is Jan’s birthday today, and she is one year older.  I won’t tell you how many of those years she has under her belt, because I want to enjoy the rest of this trip and not spend a day in the hospital removing her flip flop from my a$$.  I tried to think outside of the box for what exactly to get her for her birthday; after all, she has both AJ and me in her life and what more could anyone ask for?  And we both already have too much stuff, so I figured I’d give her an experience instead of a thing.

So on her birthday, we went on a tour of Dachau.

As I reflect back on the day, there are two things that come to mind:

1.  Everyone should, at least once and preferably early in life, go to memorials that mark the holocaust or other atrocities/genocides, of which there are more than a few.  See what happens when we de-humanize other people.  Keep it as a reminder that we should keep fighting so that nothing like this can happen again.

2. Not as serious but still a valid point:  It may not have been the best idea to take my wife to the Dachau memorial for her birthday.  Perhaps a bit too much outside the box.

Before we get to the tour, let me wind back to the morning.  When we left you we were trying to get to sleep on a blisteringly hot night in a hotel (and a city) that doesn’t have air conditioning.  Consequently, our windows were open.

As mentioned earlier, our hotel is a stones throw from the main train station on a street that is filled with pedestrians and very loud cars.  When the sun finally went down, the crazies all came out and partied like it was 1999 (Prince).  All night long (Lionel Ritchie).  Then went to bed, and we did as well, until we were awoken by what sounded like a trash truck dumping a load of trash into the middle of the street.  Which, upon looking out of our window, was EXACTLY what it was!  Then, as we tried to go back to bed, we were serenaded by the city worker kicking and dragging bottles and cans across the street to throw back into the back of the garbage truck.  We were NOT thrilled. 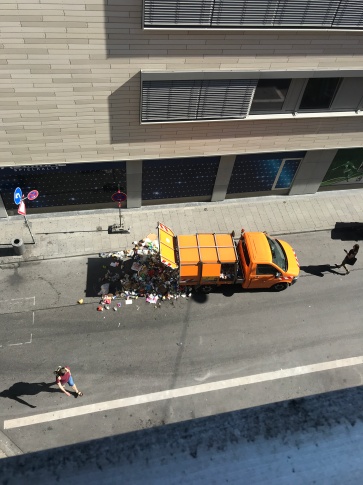 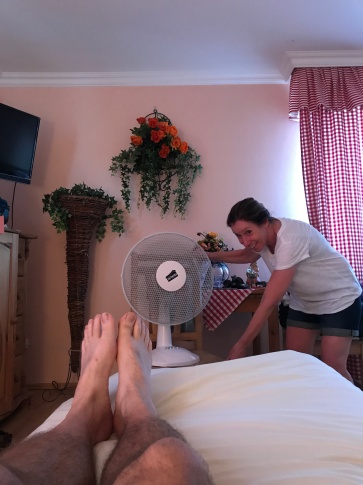 It turns out we were just like everyone else….Munich, Germany and most of Europe isn’t made for 95+degree days, though most of the people we saw still had a smile on their face.

We got up the crack of 9am, stumbled to find some coffee and pastries and checked in at the hauptbahnhof at 10:15 with Mark, our guide for the day.  There were 29 of us English speakers in his group, including a couple of families.  I talked to every family and all of them were in the same ‘lack of A/C hell’ as we were, with one family staying in a hotel that overlooks the train tracks:  They were both hot and woken ever 15 minutes by arriving/departing trains.  I always feel better if everyone is miserable so this cheered me right up.  Until we got to Dachau.

We decided to use a tour company for this particular endeavor to get some insight into what happened in Dachau–something more than a tape recorder.  It wasn’t too much more expensive (and much less hassle) than me booking/buying tickets for train/bus/entrance, so I cracked open the wallet.  And it was worth the trip.  While I can’t say we had ‘fun’ on this excursion, it certainly was more than worth a day of our lives. 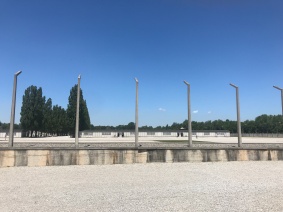 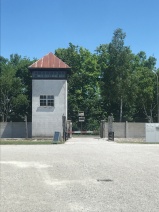 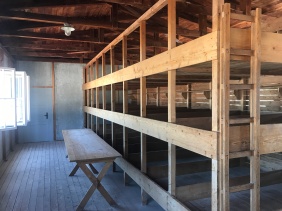 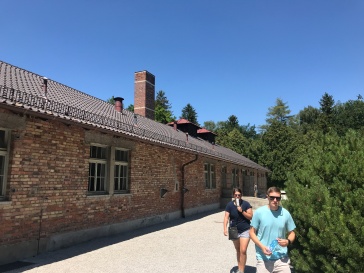 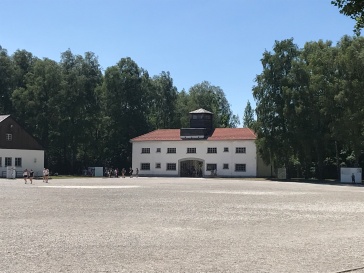 After we made it back to Munich, I decided that I had to up my game a bit to help her celebrate the birthday.  Jan requested that we not eat any more Bavarian food, so I found a pizza place that was a mile from our place.  In the heat.  But NOT in the tourist district.  Good dinner, stopped for ice cream afterwards and then at a couple of random old architectural goodies that are spread like horse droppings on a trail.  Because it was still hot and we didn’t want to go back to our fourth floor oven, we stopped at the Augustiner-Keller beer garden.  It was the first beer garden listed on a map of Munich (1812) and it was most excellent.  Just north and west of the train station, it has hundreds of tables underneath trees which dropped the temperature to something almost close to comfortable.  Shade, plus a liter of beer and a glass of wine made everything better. 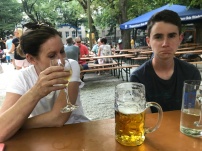 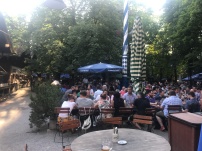 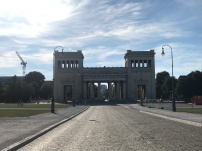 We have our new food of the trip.  Not that we ate it, mind you, but we saw it.  At the Augustiner-Keller there was a stand that sold whole fish, with sticks in their mouth, roasted over a charcoal fire.  Then when cooked, stood up on their heads at an angle.  “Fish Sticks” Jan dubbed them, and we are going to take a trade mark out on that! 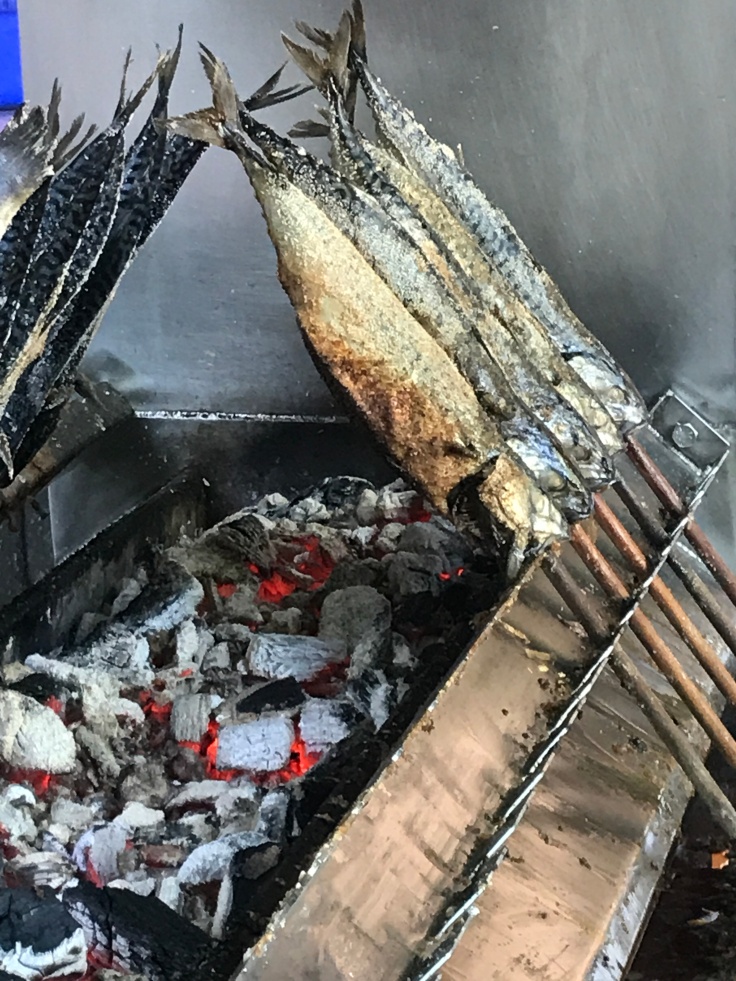 Tomorrow we head for Austria and the Alps!