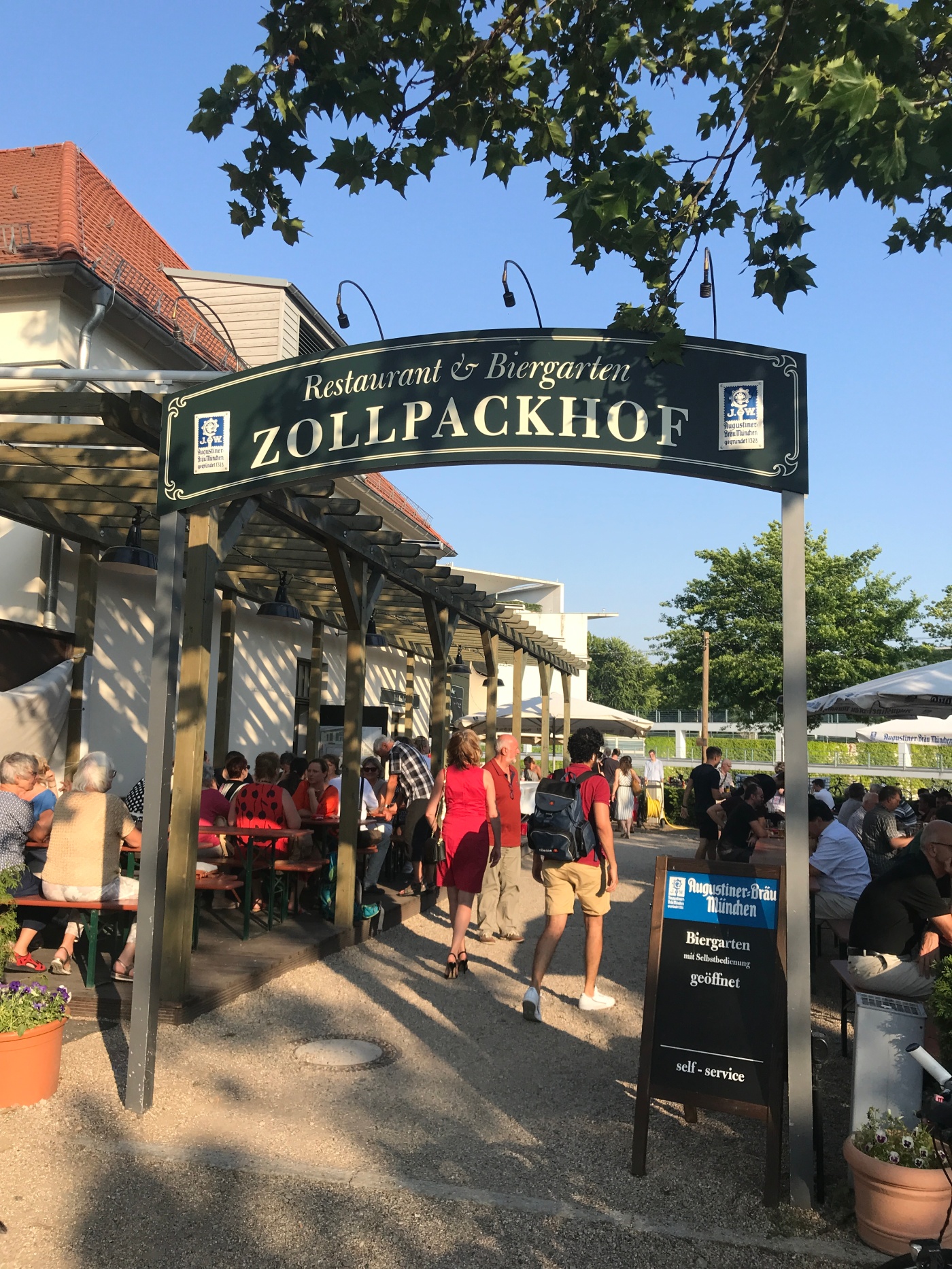 When last we left you, Jan was trapped in the middle seat between AJ and myself (neither of whom have a good grasp of the concept of ‘personal’ space’), tormented by both a lack of AC and a small child screaming directly behind her.  The flight, once the AC is turned on and the mother administers a healthy dose of Benadryl to her daughter, is uneventful; we watched movies and tried (unsuccessfully) to get a little shuteye.

Our destination is Berlin via Dublin.  We arrive in Dublin six and a half hours after take and our bodies are tell our brains it is midnight.  But the clock says five in the morning and the sun is up.  We are all jacked up.  AJ stumbles around like a drunken sailor as we wind our way through corridors with random people helpfully pointing the right direction.  We don’t need to clear customs; we just show our boarding passes at about six checkpoints and walk about a mile and a half to our connecting gate.  It feels like we are in ‘Europe-lite.’  The money is Euros instead of dollars but everyone speaks English and we are surrounded by a bunch of pasty Americans.  We walk outside to our next plane and it is COLD out on the tarmac.  Gotta be 50 with a nice north wind.  Feels great after our experience on Aer Lingus (Gaelic for ‘cattle car of airlines’) flight.

We land successfully in Berlin at some very old airport, get our bags, clear customs in about 30 seconds with a very efficient and serious Polizei man then stumble outside into the blazing sunlight.  It is 90+ degrees at 10am, but the Germans have disguised the temperature by giving us the reading in ‘celsius.’  Some weird archaic way of measuring temperature that says that the temp outside is 32 degrees, which is CRAZY!  It should be cold but instead we are sweating bullets trying to find our way to catch the bus to the city.  After five minutes of fighting the crowds and the sun, and after seeing the HUGE queue for the bus, we made the executive decision to take a cab to our hotel, forget the expense.  Short walk and we are in a very air conditioned Mercedes purring through the city streets towards the Berlin Haupbahnhof.  I threw out my one German phrase I remembered (“do you speak English?) and the driver shot me down with a nein and a derisive snort.  It was a quiet ride.  20 minutes and the best 20 Euros I’ve spent in a while, we are at the hotel Amano.  Our home for the next three days. 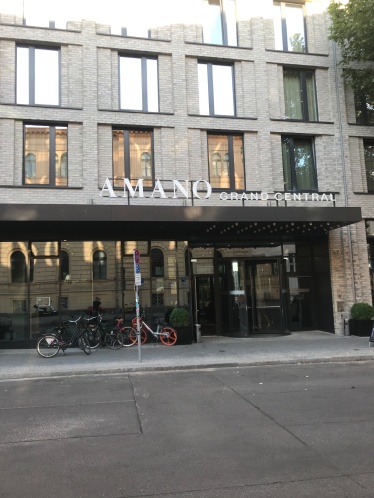 Hotel is, at first glance, good enough.  It is located across the street from Berlin’s main train station and walking distance from the attractions we want to see.  What ended up making the hotel GREAT is that even though we arrived at 11am, they got us into a room where we immediately laid down and went to sleep for two hours even though we agreed in Maryland that we would stay up all day!  That wasn’t happening.  Up at 2, unpack and at 2:30 we are out exploring.  Wilting, is more like it.  The temperature is now up to what sounds like a cool 40 degrees, but is instead a blistering, humid wreck of a day.  We have no schedule to follow so instead of doing the smart thing and finding a place inside, we decide to walk around the city for two hours.  We head off to see the Berlin Wall Museum which is reasonably close to our hotel but the heat is smoking.  By the time we see the wall and get back to the hotel, we have lost 10 pounds in water weight, have to take AJ to a clinic for an IV injection (that is a joke…) and are now both jet lagged and cranky. 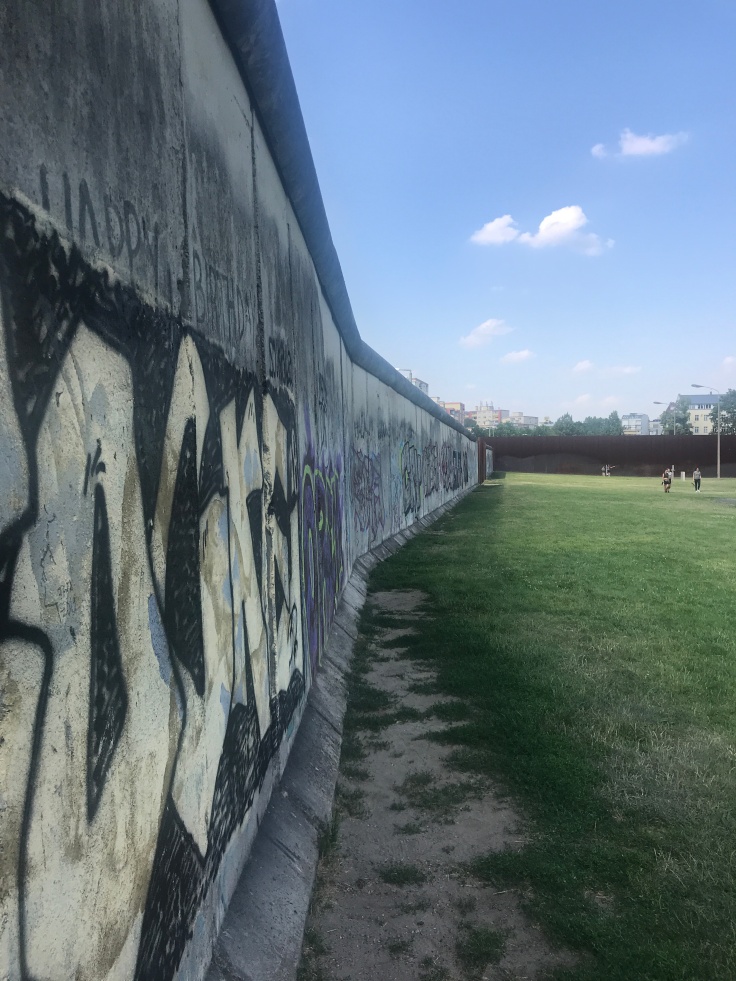 The solution?  A Bier Garden!!!  Turns out that there is one within a ten minute walk from our hotel.  I’m certainly not shocked.  The place we were going to was both a restaurant and beer (bier) garden, but the restaurant was closed due to a ceremony of some sort.  No problem–we joined a couple of hundred of other people escaping the heat by drinking beer outside under huge umbrellas.  They way this works is you go into the garden then up to a series of windows where you order food and drinks cafeteria style, pay and sit down and eat/drink.  For moi, curry wurst (and a dunkel), AJ had bratwurst and pomme frites (fries) and Jan had a pasta salad (and wine).  It was a good end to the day…we were able to stay awake all the way up to 8:30pm which was good enough.  A long, long travel day was complete, we were in Berlin with all our bags, had a bed to sleep in, full bellies and ready for anything to come…as long as we get some sleep!