Back to ‘normal’ life (Aug/Sep/Oct)

We spent a little (very little) time planning our trip, a lot of time on the trip figuring out what the hell we were doing but exactly ZERO time actually figuring out what it would be like once we returned.  Based on what we started with, we had some idea of our ‘to do list when we got back home’:  Get a smaller house in the area that we left from so AJ could go back to his school; Get a job (Jan) or not (Jim); Get a haircut (or not); and in general, revert to life on the hard and not on the boat.  ’Normal.’

And in my head, this would all be easy.  We have moved many, many times,  bought a bunch of houses, and we were moving back from whence we came.   Easy-peasy.

But who knew that we would actually like living on the boat, enjoyed moving from place to place and seeing new things and, in general, just not want to get off the damn thing. So all those things we have to do to get back to real life suddenly become drudgery.  1

I’ll give the Reader’s Digest version.  We got back to the marina, found a small townhome (NO MAINTENANCE!), closed on it at the beginning of July and got our stuff delivered by the end of July.  And since then done the myriad and varied things that need to be done when you move.  And there are some lessons we are learning upon return.

1. We have too much stuff.  When we left we had not one but two garage sales.  We sold a bunch of stuff on Craigslist.  We dumped a ton of stuff on our neighbors.  And what we thought we couldn’t live without, we put into a 10×30 storage container.

And upon return we opened up that 10×30 container, looked at the contents and realized that we missed the mark by half or more.  Like we hadn’t used this stuff in a year, didn’t really need any of it and it wasn’t going to fit in our new place.  Like not even close.  So after we moved out the stuff we needed to live, we still had half a 10×30 storage unit full of junk.  To which drove up a truck and took it all away.  To where, we don’t know, but someone needs it more than we do. 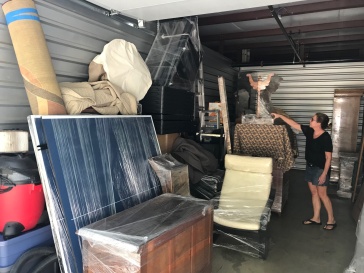 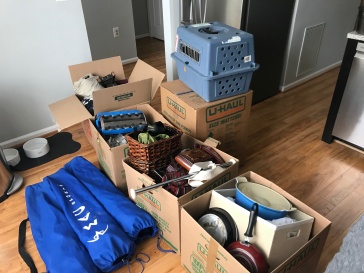 2. We were idiots about how we kept our stuff.  This is more a by product of the limited amount of time we gave ourselves to get ready to go, but the way we organized our stuff in the storage container can best be described as ‘haphazard.’  Or ‘stupid.’   Because stuff we did need (like papers or dishes) was wedged in a random box way at the ass-end of the storage facility.  And things we didn’t need was all up by the door!  So, for example, when Jan needed to get a copy of the paperwork that showed that she had completed the required continuing education units for her nursing license   2, we couldn’t find the paperwork.  Because it was no where close to being accessible.  What could we get to?  All the stuff from our old garage, like lawn tools, shovels, rakes, etc, which we will NEVER NEED AGAIN!

3. Getting back to real life is tough.  Except if you are 13.  It does me good to remember how the transition to living on the boat went.  Hard.  And long.  Getting trapped in a small space with no privacy, on a boat that seemed to break every 10 minutes AND on a boat that had hard bits that I ran into every 20 minutes took awhile to get used to.  But we expected that to happen–it was part of the big adventure.  I suppose the ‘coming home part,’ in my pea brain, was going to be easy.  BOOM–we are back to life.  But like the way out, there is adjustment to life back.  Cars move fast, there are a lot of people and most seem to be cranky.  There is some goodness–we do have creature comforts once again and the nights of no AC are a thing of the past.

One slightly funny bit is the wind/weather.  While we were gone we were obsessed by the weather.  We had multiple apps plus a radio plus the internet to track the wind/weather/waves.  When you got more than one person together, one of the first topics of conversation was the weather.  We knew the weather forecast in detail for the next three days.  Now?  Notsomuch.  Like at all.  We hopped in the car the other day and headed out on a trip and after we left we realized that is was a really windy day; we were being blown all over the road.  But what did it matter?  We were in a car!  What did we replace those hours of weather obsession with?  Surfing internet, of course.

4. We obsessively fix everything.  Even if something doesn’t need to be fixed.  Which is a good lesson from the boat, because a problem ignored turns into a disaster.  So we have replaced the home air conditioner, put new floor in the ‘basement,’ put in crown moulding and anything else we can find.  And the boat still occupies a day a week.  Without someone to take her out everyday, she is starting to make her unhappiness known.  Had to replace fuse holders, hot water heater is shot and needs to be replaced, finally fixed the battery monitor, had a shifter cable shit the bed and need to be replaced… 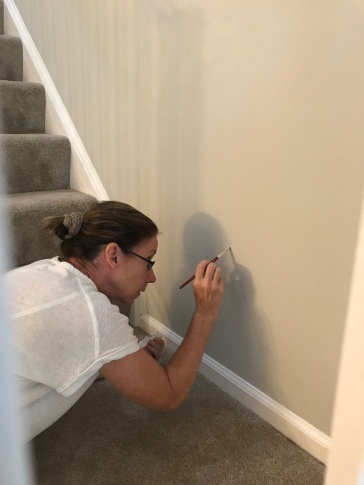 5. Lucky learns that if you run off, you go to jail.  Lucky has had a hell of a time as well.  For the past two weeks we have been commuting from boat to condo and back again and Lucky gets dragged from place to place to hang out with us.  Boat life is pretty easy for him.  He is on the boat, or on the dinghy or on shore. People knew him and if he bounded off the boat, he returned or was returned to us.  But in our new place, we are one condo in the middle of a thousand condos.  And everyone has a dog.  All on leashes and well behaved.  Last week, while we were moving boxes, Lucky decided to explore.  Stretch his legs.  Go chase a squirrel.  Whatever.  So he bounded off the porch and headed off  after something.  We figure that it was either a squirrel to eat or dog to hump.  Irrespective of why, the end result was bad.  At some point a good Samaritan saw a lost puppy, called animal control and Lucky got put in doggie jail.  This was Saturday afternoon after animal control closed.  And it didn’t open until Tuesday at 10am.  In the meantime our household was in freakout mode.  We walked/drove/ran around the neighborhood.  The Mish’s took over posting to social media.  We posted fliers.  There was wailing and gnashing of teeth and no small sense of irony–we go traveling for over a year and don’t lose the furry bastard, but get back to home and BAM!  He is gone.

On Monday morning I got a call from a nice lady from animal control letting us know that they had him, but that we couldn’t pick him up until lTuesday morning.  She also told me that we would have to pay for the cost of picking him up and three nights in doggie jail.  Cost?  $15 for transport to jail plus $5/night for a total of $30.  Which makes animal control a RIDICULOUSLY cheap kennel option for the next time we head out of town.  Lucky, on the other hand, probably doesn’t see the goodness in that–he did NOT have a good time and since that day has not left our house without one of us close by his side. 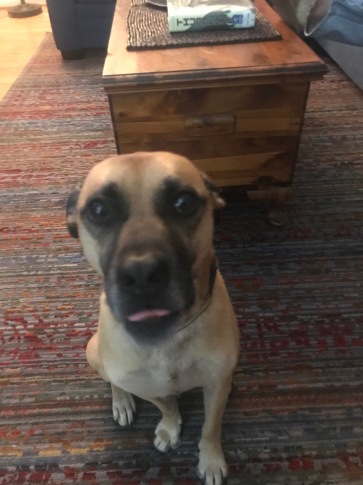 1:  Realize that I’m totally bordering on (or perhaps bounding over) the whining line.  I’ll back away.  Slowly.

2:  And oh lord was there some swearing (like a sailor, natch), and a weekend of Jan doing nothing but school work (whilst complaining).  And AJ and I staying very, very far away from where she was working….