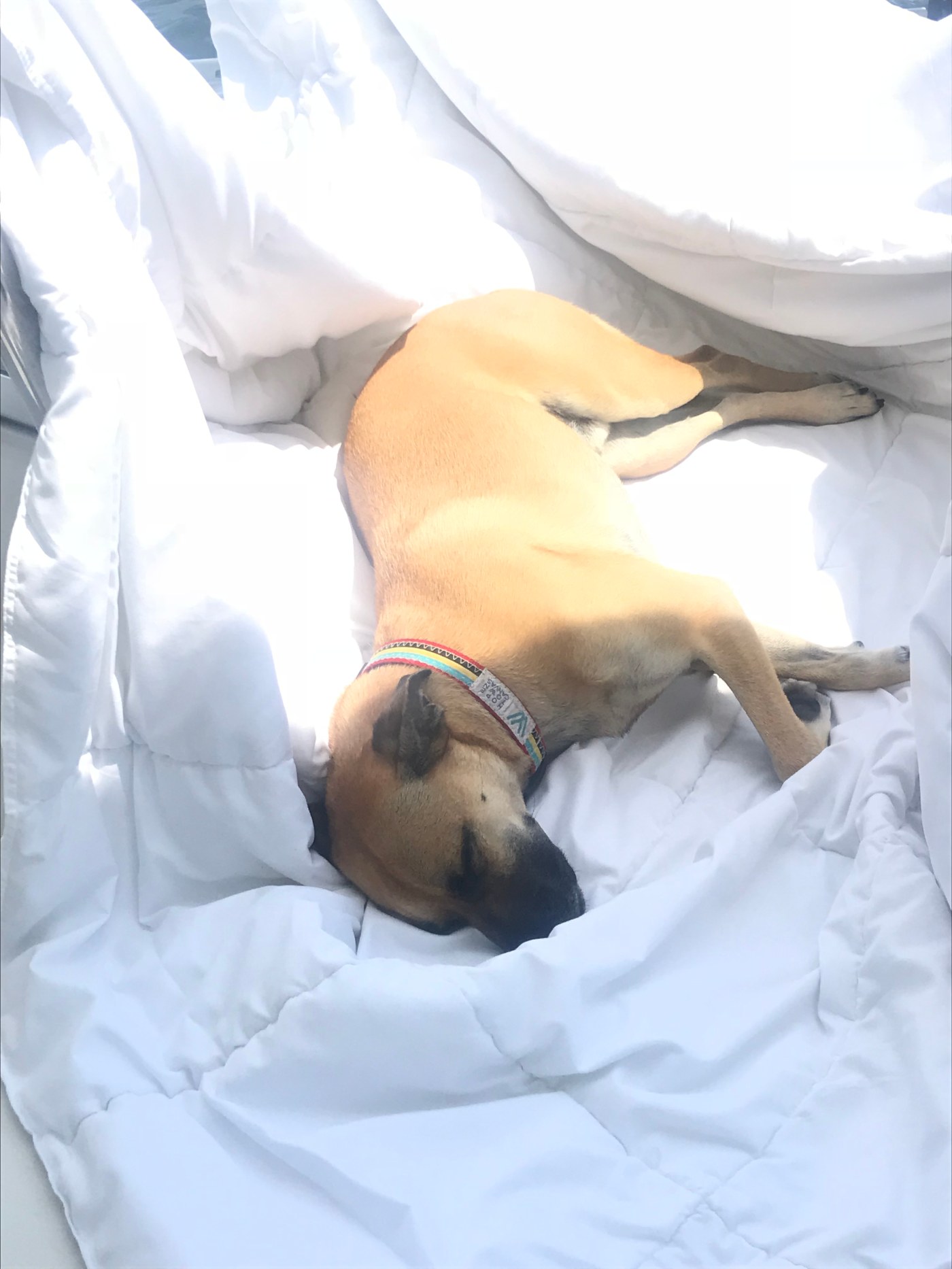 We have have three days remaining on our trip and three states that we will cross. Assuming weather cooperates.

When last we left you, we were sitting at the visitors center in the Dismal Swamp. The day we arrived it rained on us the entire day and the swamp seemed aptly named. But when we awoke, it was to sunny skies and the trees were lit up in green. It was gorgeous. Our canal stretched in front of us, not a ripple breaking the surface. We had 15 miles to the last lock of this trip, then 20 miles to our stop for the night in Monroe, VA. Easy, peasy.

The lock has a scheduled 1100 opening, so we slept in a bit and made our way slowly down the canal. It was quiet and peaceful; the only wind we had was from our forward movement. We arrived about 20 minutes early, hovered in place, then proceeded with the motor vessel Fantasy into the lock. All going very smoothly. But apparently the lock master hadn’t used all of his words for the day. Or for yesterday. And since we were basically captives in his lock, he went ahead and used all his words on us. While we were tied to the side of his lock. And couldn’t move. Prisoners. Which took northwards of an hour and could be construed as torture in some parts of the world. It was all very interesting, but people to see, places to go.

We were sprung at just after noon and headed north through Norfolk. I have been here before and seen the Navy ships up close and personal. But it is quite a sight to see all the ships by boat–it was so impressive, even AJ stopped playing video games for two whole minutes to gaze at the wonders. Fortunately it was a quiet day on the water and we didn’t have to contend with any of them leaving; we could just look as we passed by. 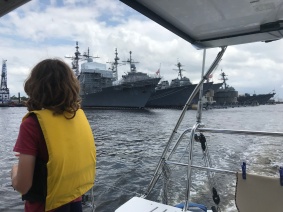 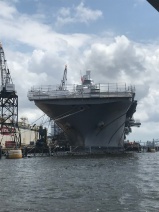 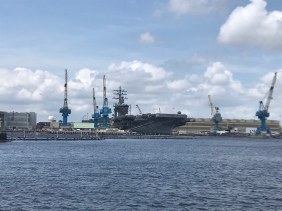 Through Norfolk and officially back in the Chesapeake Bay over a year after we left. The trip from Norfolk was quick–wind was off our port side blowing at 10-15 knots, waves were generally behind us and there wasn’t a lot of traffic once we left the big city. The destination of the night was Monroe, VA where we took a slip at Salt Ponds Marina. We had dinner on our boat with Lee, Corey and Kellan who gractionsly joined us for the evening, and it was fantastic.

Next morning we were heading into the bay for our two day trip back to Herring Bay, MD. We looked at the forecast the day before and it was ok in the morning and in the afternoon, but it looked like a front was moving through mid-morning that would put the wind in our faces (which we don’t like), before coming off our starboard side (which we do like). But it didn’t look like it would last too long AND the day was relatively short (like 40 miles), so we gave it a green light. We would leave early to get the most out of a hopefully nice morning and then finish strong.

And at 6am it looked like our plan was a winner! The bay was flat, nary a wave. It was overcast with some high clouds, but we had seen worse days. A slight southwest wind. As we turned north we could see another sailboat behind us heading north as well. It was shaping up to be a GREAT day. And for two hours it was!

Except. We can’t have our last couple of days be drama free. It is our opinion that our boat is a sentient being. And that she knows we are almost home. And, thinking forward to days tied up to a dock instead of out traveling, she is getting a bit depressed.1 Which exhibited itself by the GPS for our chart plotter going on the fritz. As we left the marina we noticed that the boat icon on the chart plotter was pointing about 75 degrees to the right from our actual heading. When we got out into the bay, the little icon continued to be jacked up which means no use of “Andy the autopilot.” And in case you were wondering, it is fairly important that the autopilot know where it is going…at least direction wise. I channeled my Joe from Mahi and started with the question ‘is it connected?’ We had been in the game cabinet (where the GPS antenna sits) the night before and apparently we jiggled the cord loose. I tightened it up and we were back in business. Boat just doesn’t want to go home. Neither do we. Dammit!

Then about 8am we noticed a bank of clouds in front of us and simultaneously, the temperature dropped about 15 degrees. And by 9am the wind had shifted to the north and it was ‘fresh.’ And kicking up waves. We had to bring in our sail and motor for the next two hours into the wind and the waves WHICH WE KNEW WAS GOING TO HAPPEN! But there is ‘seeing the forecast on an iPhone screen’ and ‘reality.’ Reality was that after an hour we were getting 2-3 foot waves that were stacked right on top of each other beating the snot out of our boat. Our ‘forward progress’ was down to just under 3mph. Which is about the speed of a baby crawling to a dropped piece of candy on the floor. Water from the waves was, of course, splashing on the deck, BUT as a special treat, the waves were also washing over the deck. I didn’t think much of it until AJ appeared from down below in his underwear, soaking wet screaming about water coming in his hatch. When he closed his hatch the night before, he didn’t lock it and when those waves washed over the deck, the water went right down the hatch and onto his bed where he was sleeping. I tried to feel bad for him, but I was laughing too hard.

The pounding waves also knocked the crap out of everything that wasn’t tied down. Which, it turns out, was a lot. We had spent a lot of time on the ICW and it made us lazy. The grill and the water jugs lining the back of our cockpit were not secured as they had been for most of the past year. And they went ahead and threw themselves all over the place. Down below things that had never fallen over, even when beating down to Georgetown, tumbled over. Books, kitchen utensils, papers were dumped unceremoniously on the floor. At least we didn’t lose another french press!

After two hours of banging the winds began to shift around as scheduled and an hour after that we were smoking on our way. Waves were now off to our side, we have our genoa out and our speed is back up over six knots. We are, as planned, going to finish this day strong.

Our finish line for today is at a place called Ingram’s marina off a little bay just south of the Potomac River. Its best feature is that it is just off the bay, so easy to get back on tomorrow morning. I called and asked if they could take a sailing catamaran. Sure, they replied. We will put you at the fuel dock–no problem. In my mind, I saw a typical long fuel dock with room on either side for our boat. But when we turned into the bay the fuel dock was very small. Like as long as our boat, so when we pulled up, we would take the entire thing. I called the owner and confirmed that

1. I was looking at the only fuel dock and

Yep. We pulled up, his son showed up to help with our lines. And our last night out would be in the middle of nowhere, Virginia. It was quiet, it had a bathroom, power and water. Everything we could ask for.

Drying out the sheets 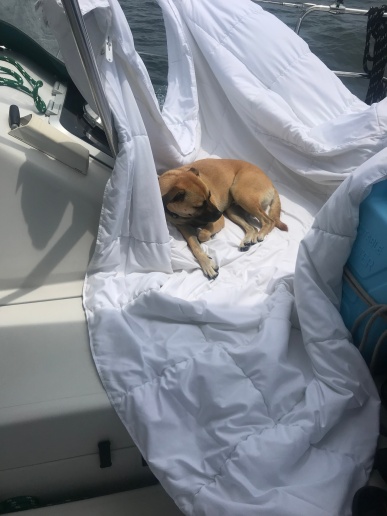 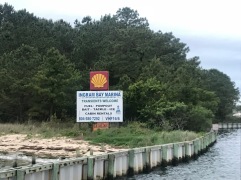 Our stop for the night

Us at the fuel dock.

And at 0530 the next morning we were awake. Dog walked and we were heading out into the bay at 0600. Our last day would be a 65 mile trip. Forecast for the day was partly cloudy with chance of afternoon thunderstorms. Winds from the SE at 10-15 in the morning, dropping to 10 knots in the afternoon. Warm and humid. We left with one other sailboat who turned south as we turned north. We ran along the shipping channel and were passed by six of the big bastards throughout the day. And that was the sum total of the drama. We alternated between the screecher and the genoa depending on the wind speed and direction and managed to average over 6.5 knots for the day. Which meant by about 1630 we were turning into Herrington Harbor and down the aisle to our new (to us) slip. Backwards because we wanted to show off our mad backing skillz (and because that is about the only way the boat will fit in the slip so that we can leave the boat. We were running just ahead of a line of thunderstorms that were waiting to welcome us back home. We backed in the boat, secured lines, turned off and raised the engines, recorded the hours and miles, saved the daily track, turned off and covered the instruments and headed down below for a snack. Just like we have done almost every day for the past year. But today it was our last time. For this trip anyway.

1Or maybe I’m projecting. Whatever.