Georgetown SC is one of two places we have visited that were named after the King, not the President (the other being in the Bahamas). Both are hot and humid but totally worth the stop.

Georgetown was a two day trip for us from Charleston. We had two reasons for stopping: First was that we had heard that it was a good place to visit; Second was that we picked it as a place to meet the crew of S/V Serenity and give them their son Simon back to them. They were going to show up on Tuesday the 8th of May, we arrived on Monday the 7th and the plan was to leave on Wednesday.

The trip to Georgetown was mostly uneventful. We played minesweeper with a couple of monohulls (they lost–love the three foot draft), and had a great night at anchor halfway to Georgetown. There were two other boats with us in the creek, but what we enjoyed was heading about a mile south down the ICW to the start of the Palmetto Trail. A 235 mile long series of trails (planned for 425) across the state of South Carolina (details https://palmettoconservation.org/palmetto-trail/map/). I’m not sure how we convinced AJ and Simon to give up their video games, get pummeled in waves on the way to the dock, and then hike through bug and snake infested woods, but they both were all in. So much so, that when we asked them if they wanted to turn around an head back after we had been hiking for 45 minutes, both shrugged their shoulders (because THAT is the emotive gesture of choice) and said they were good–we could keep going.

A palmetto tree (I think) 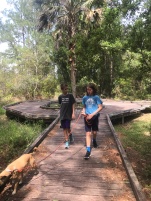 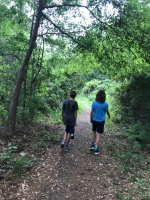 I was ecstatic! MORE hiking! But Jan quickly put the kibosh on that crap and we turned for home. I wasn’t complaining too much. Our topic for conversation on the way out was hiking the Appalachian Trail (AT) and how to do it. Not IF we were going to do it, but how she would be able to hike the trail without:

a. Carrying a big pack
b. Sleeping on the ground more than one night in a row and potential no more than three nights in a week.
c. Get showers. Daily.
d. Not get bitten by bugs or see any snakes.

Tall order, but I’m pretty sure we can work through these small details! NEXT ADVENTURE. And is not Jan the best damn person in the world?!?!

Back to the boat, dinner and we pull out a card game to introduce Simon to family game night. As a reminder, Donnelly family game night is a hyper-competitive, sarcasm filled affair complete with hurt feelings (Jim), rule disputes (AJ) and rampant cheating (Jan). We figure what better way to test Simon’s mettle than by pulling out a card game.

And true to form, our ‘quick’ game of Munchkin turns into a two hour epic battle at the end of which Simon wins. And wins going away. He killed us. Took him about 20 minutes to get the rules, 20 minutes to figure out the strengths and weaknesses of all of us and the rest of the time to slowly grind us down and suck our souls out of our bodies until he won. I’m not at all bitter. 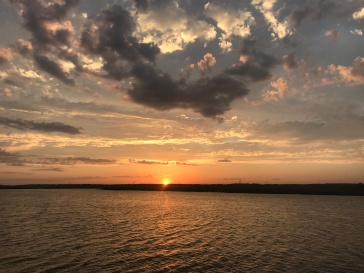 Sunrise at the anchorage

Next day is a long, slow slog against the current, but since we aren’t in a hurry, we don’t worry. Just relax and enjoy the ride.

We arrive just after lunch in Georgetown, SC. We are staying at the Riverwalk Marina, downtown Georgetown. The marina is half finished/half under construction. The half of the marina we are in has brand new floating docks. The other half has a huge barge with crane sitting in the middle of where the docks will be, with six dudes doing some serious hard work to get them finished. The marina itself is fantastic. Its wifi is smoking and AJ does his best to cripple its speed. And we have access to cable and for the first time in over 15 months, hook a cable to our TV so Jan can watch live episodes of “The Voice” and binge watch HGTV and the food network. It is electronics heaven or hell (depending on your point of view) on our boat. Between the AC and electronics, we ruined ourselves for the next couple of anchorages.

Georgetown itself is ANOTHER town in a series of cute towns. I remember fondly when we got to St. Augustine in Florida and were blown away by how nice it was. Historic buildings, shops you can walk to, great architecture. Little did we know it was just the first in many town along the coast that are AWESOME. We had more of the gorgeous houses (helpfully marked on the outside with plaques noting the year they were built), moss covered oak trees shading the roads, a downtown that is vibrant with shops, restaurants, ice cream, candy stores and all within walking distance. There is a seafood store a block from the marina with fresh seafood just off their own boats. $9.99 for a pound of JUMBO shrimp–and they were huge. And last, but not least, more great people.

Lots of work at marina

We were greeted by the Great Loop harbor hosts for Georgetown, Mike and Ginger, as we were walking down the street towards downtown. They saw our looper shirts, stopped us and gave us a run down on the town. We saw them a second time later in the week and they hooked us up with Tommy; a local freelance reporter who is doing a story about people on the great loop. We spent three hours with Tommy and I think the ratio of talking was about evenly split. He learned about what we were doing, we learned about Georgetown.

We did take Mike and Ginger’s recommendations for a couple of places to get dinner/lunch while we were in town and we also made sure we hit a couple of the ice cream and candy shops. Which is where we found dipped bacon. Bits of bacon dipped in chocolate. White chocolate or dark chocolate. When we saw it behind the counter we thought ‘we HAVE to try this.’ I asked the nice lady if it was good and she made a face that conveyed clearly her feelings on dipped bacon. And it wasn’t good. I asked her for a piece and she gave me the shrug that says “your life, idiot” (she killed the non-verbal communications) and gave me a piece with white chocolate. AJ both tried it and it was not good. These are two things that both taste EXCELLENT apart, but did not go well together. The non-verbal lady finally uttered some words and gave away a little secret. Bacon and chocolate, she said, do go well together. The secret is to fry some bacon slices, cool five minuted and pat dry. Then dip on chocolate to make bacon chocolate sticks. Most excellent she pronounced. That is on our list to do next Christmas season when we have chocolate in the house. 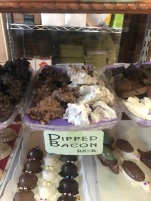 Not as good as it sounds. 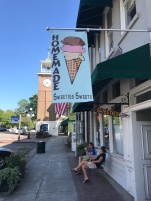 Sweets for the sweets

Looking for a handout

Simon’s family did come and get him on Tuesday; we spent the day together with kids playing D&D and adults sit out on deck. They all left in the afternoon and while we don’t miss Simon cleaning our clocks in games, we do miss him on the boat.

Our bonus day in Georgetown (since we stayed one more) was spent doing school work and disaster mitigation. The disaster was AJ’s hard drive for his Xbox crapped the bed. Rather the USB connector to the drive fell off. And we don’t have any replacement parts. We need some exercise anyway so all four of us (Lucky included) head off to Mr. Wal-Mart’s place to find a replacement disk drive. 2.5 miles each way. About half with sidewalks. For once there was absolutely no complaining about the length of the walk.

And in the ‘small world,’ category. As we got back to our boat (just before heading into another ice cream store), we ran into the Marshal and Corinne from S/V Cormoran. They are a Canadian couple that we met and travelled with for a couple of weeks on the rivers. We last saw them WAY back in Kentucky, or Mississippi or some other gator infested place. They also went to the Bahamas and are now making their way back (with the rest of the Canadian Navy) to Ontario.

Georgetown is our last town in South Carolina and it is a great way to leave the Palmetto state. 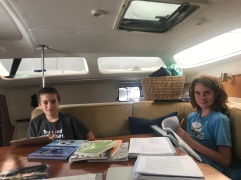 And not exercising the mind