Another day of moving up the ICW. It starts out like all the rest. And then an engine quits.

I have to say that we have been pretty lucky on the trip when it comes to maintenance issues. We have had some. Lot of problems with the inboard generator including, but not limited to, a spectacular blow out of the impeller, leaking diesel from fuel return, spurting unknown oily substances into the back cabin, and generally being a pain in the ass. Minor problem with solar panel. Inverter/charger fan crapped the bed. Various and sundry electrical glitches. Toilet smells (though there seems to be a correlation with AJ exiting the bathroom). Normal stuff. But nothing with the engines, or nothing that caused us to have to stop for any length of time.

And as I think back to this morning, we really should have seen this coming. We have been on a roll. We all are in a rhythm and ‘moving days’ are now non-events. Today was a good example. Our original plan was to get up early, catch the 0630 swing of the Beaufort bridge right by our mooring field and then head 40ish miles and anchor. Then last night we had a very short discussion about the plusses heading out at 0900 for the next swing of the bridge (we get to sleep in) vs. the minuses (not sleeping in) and decided we like sleep. So our wake up time is now 8am. I take dog to shore while Jan preps boat for movement and makes coffee. When I get back, engines are down, everything is stowed and coffee is ready.1 We sat and relaxed for 30 minutes drinking coffee and watched a trawler ping-pong his way through the marina on the way out to the ICW. Did I mention that there is about a 2 knot current ripping through the ICW at 0845? Then at 0855, Jan went up front, dropped lines and we got in a line of six boats heading through the swing bridge. No stress, no fuss, no drama. 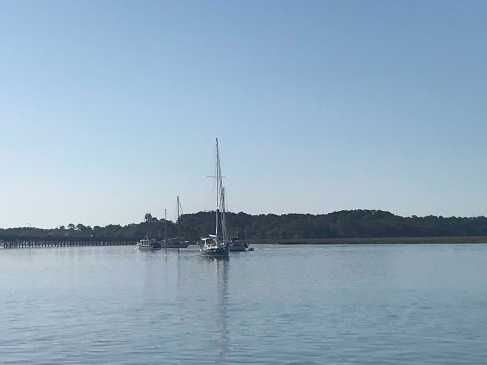 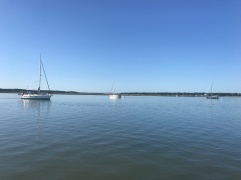 …and circling for bridge 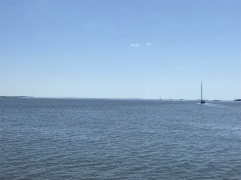 In a line of boats

Including a house boat!

I took my kazoo and went to wake up AJ with a fantastic rendition of “God Save the Queen.” He is suitably impressed, and demonstrates his pleasure with the performance by throwing a pillow at me. Day is normal. Jan takes over driving while AJ takes his tests (it is test day) and I ‘proctor the test’ which means ‘read my book.’ We spend the majority of the day in a lovely progression of three sailboats and one house boat all heading north on the ICW. This portion of the ICW through South Carolina, after we leave Beaufort, is through marshlands. We pass under one bridge and pass one dredge. Rest of the day is just the boats, the birds, the sun and the wind. Though not enough wind for us to sail.

The great weather and the nice day seem to infect everyone. When we are passed by fast movers, they slow down and we exchange pleasantries on the radio. No jack wagons to ruin the day today. It is, like most of our days in the ICW, drama free.

Until it isn’t. I was at the helm and we were fighting against the current on one of a ton of rivers that lead to the ocean. We were going a whopping four knots (4.4 mph). Two boats in front of us, and one sailboat (Carpe Diem) behind us. When our speed suddenly dropped to less than two knots. And the sound of two happy engines now sounded like one semi-happy engine. And one mute engine. Jan popped up the cover on our port engine and sure enough, it wasn’t running. And it was kicked up a bit from its normal position. I tried to lower the engine from the helm station, but while the tilt/trim motor ran, the engine didn’t lower. Jan and I swapped positions. She called Carpe Diem (sailboat immediately behind us) and told them to pass us on the starboard side; we were having troubles and going slow. I tried to get the engine to go down, but it wouldn’t move. The engine would start, but when we put into gear it immediately died.

Nothing to do but pull off to the side, drop the anchor and hop in the water and see what the heck is wrong. So we do that. Jan and AJ go into ‘battle drill,’ heading up front and dropping anchor. It went normally until we tried to back down the anchor. We had the boat facing into the current, so we should have been pushed back from the anchor. But for some reason we were sitting on directly on top of the anchor and the boat wouldn’t move. Weird.

But hell–we are only in eight feet of water, we have 80 feet of chain and a big honking anchor sitting on the bottom. We aren’t going anywhere. I change into swimsuit and hop into water that looks like a cloudy cup of coffee. Not particularly inviting. I get under the engine and there is a 1/4 inch line wrapped around the prop. And it is still hooked to something, and whatever is at the other end is heavy and pulling on our boat. We thought is was a crab trap (of which there are a million) but we didn’t see any close to us when the engine stopped. Whatever. We unwrapped the line and fired up the engine–it worked. We were soon back on the ICW. Both engines purring once again. We are headed off to our next anchorage with only a slight delay.

We sometimes think back a year (and it has been a YEAR since we left as of 5/7/18) to when we started this trip and wonder how much we have (or haven’t changed). And as we resumed our trip we thought back to what we would have done a year ago. We are pretty sure we wouldn’t have called the coast guard. We may or may not have called Sea Tow. Panic would have ensued with predictions of DOOM! We definitely would have hyperventilated. And would have had to take a day or two off to recover. Today it was just another thing.

The anchorage was just off the ICW on Steamboat Creek. A wide open creek with no other boats and, as an added bonus, a boat ramp about a mile downriver from our anchorage. AJ, Lucky and I hopped in the dinghy and headed to the boat ramp. Which, as far as we can tell, in the middle of nowhere. It is at the end of a long dirt road, with an enormous mansion about a half mile up the road. When we arrived, there were two gentlemen fishing and crabbing. We talked a bit about what was biting and what wasn’t and about life in general. We were a bit handicapped because of the language difference; we were speaking Maryland and they were speaking South Carolina.

Gorgeous sunset and equally beautiful sunrise. South Carolina is rapidly heading up the hits charts. Tomorrow is a short run to a place that is TOTALLY different than where we were tonight. Charleston.

Morning over the marsh 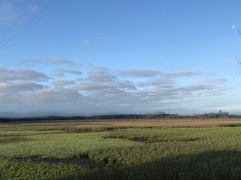 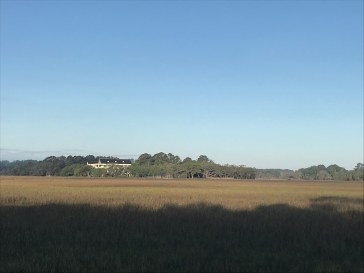 Bit house in the middle of nowhere…

1Did I mention that Jan ROCKS!