The plan for today is to head out into the Big Bad Atlantic (BBA), scoot up 40ish miles and cut off a bunch of the ziggy-zaggy stuff. But first we have to get off the dock.

We have gotten pretty adept at getting this boat from point A to point B, and then settling the boat at point B. For the past four months this has predominantly been at anchorage. We arrive, putter around in circles like a dog preparing its spot in the field, and when satisfied we have enough depth and room to swing our boat, we drop our anchor. Back her down. Repeat if necessary until anchor is set to our satisfaction. It is difficult to communicate effectively from the front of the boat (where Jan and AJ stand, next to the anchor), to the back of the boat (where deaf Jimmy stands). The back of the boat is surrounded by an enclosure that traps the noise of the engines while up front they are in the elements of wind, rain, sleet, hail, lightening, snow, whatever. Point is, it is hard to communicate which can lead to disaster and marital discord. We used to use headsets to communicate, but those were so sensitive that the voice activated microphone would pick up not only the sentences that had to do with anchoring, but also any other words that were muttered at what we thought was an ‘inside voice’ level.1 For awhile we just went ahead and yelled back and forth, but I’m deaf, Jan has selective hearing and AJ has so much hair around his ears it is shocking he can hear anything at all. Now we use hand and arm signals. Usually graceful pointing in direction that we want to move the boat, and signals that the anchor is up(or down), etc. The more jerky and violent, the more emotional we feel about what we are signaling. But in general we all have the motions/movements down. And when it comes time leave and pull up the anchor, we turn on the windlass, Jan heads up front, in comes the chain, off with the bridle, much obsessive cleaning of mud from the chain and the anchor with the deck wash hose, up comes the anchor and we head out. Point of all of this is that we are no longer stressed by anchoring, either dropping and certainly not leaving. It has become routine.

But now we are back at a dock. Our landing at the dock last night was not great.2 Getting off this thing may be worse.

When we landed, we were told that we would be packed in tight. And we were. About 3 feet to the boat in front of and behind us. The picture for this post shows the distance from our dinghy to the anchor of the bot behind us.  Not a lot.  When we woke up in the morning and had our cup of coffee3 our focus was not on heading out into the BAA and spending 10 hours off shore. Our focus was on the 10 minutes to get off the dock without knocking into either one of the boats immediately to our front and back. We were told that the marina would have someone in at 0700 to give us a hand off the dock, but based on their help getting us into the dock (and almost through the dock), we figured we would come up with our own plan and not have rely on their expertise. 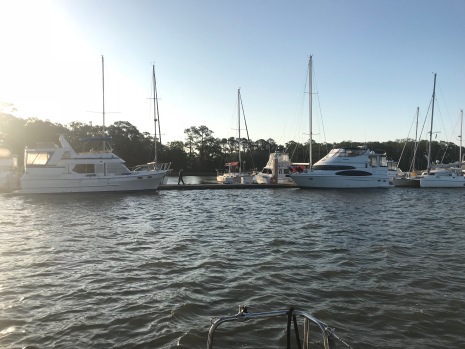 A look at our spot after we left. 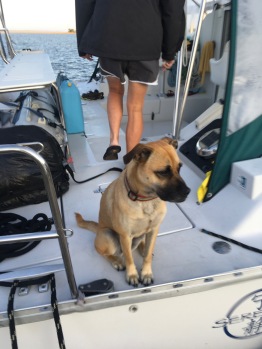 The state of the environment at 0700 was not favorable for an easy exit. The current was pushing us forward at about half a knot. If we tried to exit by swinging the bow out into the river, we would either have it pushed back into the boat in front of us (bad), or the bow would stay out and we would hit the boat in front of us with our stern (also known as bad). The wind was (not) helpfully pushing us onto the dock. So we needed to swing the stern into the river, against the wind, and one stern was clear, back out, making sure we miss big boat behind us. Then start moving forward and on our way. Doable. With the help of a spring line.

We took two dock lines and tied them together to get the length we needed4 and then hooked a spring line from the bow back to a cleat on the dock that was located about midship, then looped it back to the bow where Jan would hold onto it and control our boat–prevent it from banging forward into the dude in front of us. Simultaneously she will hold a fender on the front side of the boat to protect our hull from scraping against the dock as I pivoted the boat around that hull. Multitalented she is.

About this time, dude from the boat behind us showed up. He told us he was glad we were leaving today and he hoped no one would take our place because he needed at least 10 more feet to have a prayer of getting his boat out of the marina. He offered to hold the fender for Jan so she could focus on the line and watching the boat in front of us.

And 10 minutes later, the dock dude arrived. We walked through our plan with him and he gave us the gold star approval. And ended up taking our spring line.

Unlike most of our plans, this one went just like we diagrammed it. I put the boat into forward with a little juice and turned the wheel into the dock. The spring line kept us from going forward and the turning of the boat ground our starboard hull into the dock like a tree going into a wood chipper, but for the fender protecting us; the driving of the hull into the dock pushed our stern way from the dock and slowly out into the river. Once clear of the boat behind us, we jammed her in to full throttle reverse and backed into the river. On our way!!

Here is the logic (which I always hesitate to use when talking about a decision that I have any part of) of why we are heading out into the BBA.

We have two ways we can go.

Course of Action 1 (COA 1, ICW): We can head up the ICW for 80 miles over two days, over patches of water that are 3-5 feet at low tide in select few (and well advertised) places, pushing against or running with capricious tides, having to pay close attention to where we are going every second of every minute of those days.

Course of Action 2 (COA 2, BBA): We can head eight miles up the ICW, take a right, run out an inlet, the turn left and run northeast along the coast in the BBA, go 60 miles and anchor and skip that portion of the ICW in one long day. And maybe sail. Maybe. If this works out, we will have the current pushing us out into the Atlantic AND when we get to the inlet on the other side, have the current pushing us back into land! This is known as ‘cheating.’

Easy decision. Forecast is for 6-8 knot winds from the west (gusts to 12) with three foot waves in the morning, diminishing as the day goes on. About as benign as you can expect for the BBA. We are heading out! 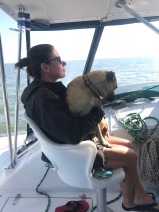 But finds comfort with Jan 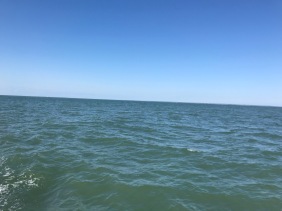 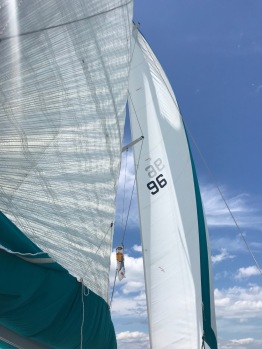 For about ten minutes. Turns out when we turned off the engines we were in a gust of wind. Boat speed was six knots. But wind dropped to eight knots, boat speed dropped to something in the fours and we were putting the engines down. We could relax, sail slowly and set our sights at a shorter anchorage. Or we could cheat with engines. Cue up the ‘Cheater, cheater pumpkin eater’ music.

So this is the BBA. No doubt about it. But not quite the same as when we were over in the Bahamas. First is the color of the water…muddy brown instead of crystal blue. Second is the depth. We are running 3-4 miles off shore for most of the day. And our depth averaged about 20 feet. In the Bahamas, if we were 3 miles off shore on the Atlantic side, the aver depth would be something like 20. As in 20, 000 leagues. Or feet. Or 2,000 feet actually. But you get the point. Deep.

We saw a bunch of other sailboats but they weren’t cheating, so we passed them quickly and ended up spending the rest of the afternoon looking at each other. And killing flies, who apparently have the stamina to fly three miles over ocean, are equipped with boat sensing radar which homes them in on our location and can communicate telepathically with other flies within a 3-5 mile radius and vector them onto our unprotected flesh. At one point the wind dies and we are swarmed with thousands of flies of at least five distinct varieties. Most of which bite.

Our destination for the day is Wassaw Island just off the north channel of Ossabaw Sound. And no, I didn’t make these names up. This place is way off the beaten trail, but there are three other boats in the river when we arrive. It feels like we have fallen out of civilization and are in some wild place. We are anchored in the middle of a river, just off of a state park with a dock; AJ and I spend some time exploring while Jan cleans the fly guts off of the boat. We then close up the boat to keep out the horde of no-see-ums. 64 nautical mile day and zero worries about running aground. We call it good!

1Some whispered comments heard over the radio. See if you can match crew member to comment.

c. “Wonder if my xbox patch is done loading.”

2It registered a 2.3 on the richter scale as measured at station IU DWPF (Disney Wildlife Preserve, Florida).

3Two cups today. Special anniversary day. Though without the traditional anniversary addition of Bailey’s Irish Creme. We are heading into the BBA…we ain’t stupid. Or suicidal.

4And added 60 foot dock line to our list of stuff to get when we get done with this. The list keeps getting longer and I’m shocked we have survived our trip to date!