I’m sure there is some way to be smart on how to use the tides to our advantage. I’ve no earthly idea how it works; our day today? A slow slog northward. But our new favorite city awaits.

As we make our way slowly north to St. Augustine, we sit down and brainstorm the things we want to see/do while we are in the city. Our first time visiting and we are pretty excited–the reviews from just about everyone who has been there are glowing. Some are city specific, some are boat specific.

Some of you may notice that the first item on the list (and yes, it is a prioritized list, at least in the mind of the dude that was acting as scribe) is not, in fact, in St. Augustine. I have a confession. A dirty little secret. I have a love for the cars that go fast in a circle (left turn, left turn, left turn, etc.) and burn obscene amounts of fuel in a very short time. This from the guy who obsesses about how to get better fuel consumption from his car and boat. We missed the opportunity to see the track when we went through Daytona, so it went on the list at number one.

And was the most disappointing of the three days.

But we jump ahead. Let me back up.

Our trip north was another slog of a day, at least until about 1pm. It started off extremely cold (like 60s), except for our engines which were screaming red hot trying to push us at a whopping 4-5 knots against the stupid current. The ICW ran along two shores lines with houses that ranged from small (trailers/RVs) to enormous (mansions) and everything in between. Sometimes next to each other. And we had a lot of time to look at them all. The wind was mostly in our faces, though as the day went on, we were able to put our genoa out and make some speed against the current. And then the current favored us and we hit 7 knots. 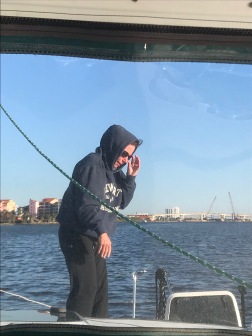 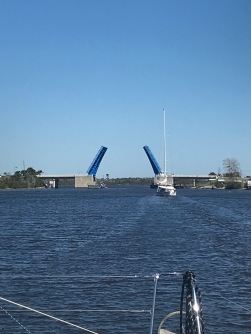 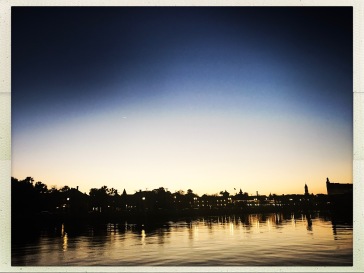 Our plan was to stop at Ft. Mantanzas, just an hour or so south of St. Augustine, but given our pace picked up in the afternoon, we decided to push the remainder and knock out the entire trip to St. Augustine. We had a reservation at the city marina on one of their mooring balls. We pulled up to the fuel dock just after 4pm, topped off our tank.1 We also SHOULD have topped off our water while we were there, but we all forgot, which meant that in two days we would be schlepping five gallon cans of water from shore to mooring ball. We then moved to our mooring ball which was right next to the dock. The marina was right downtown. A great place to explore.

We have three days in St. Augustine, and the third day is forecasted to be a very windy, very wet day. So two days to explore.

Day one is gorgeous. Sunny. Cool. Light breeze. Right outside the marina is a ‘red-trolley’ stop. A hop on and hop off trolley that takes you to all the main sites of the city. We plop down our money and hop on the train. And we use it to see the fort, the fountain of youth and the lighthouse.

What we learned on our day.

St. Augustine is the oldest city in America. Let’s insert the obligatory caveats. According to wikipedia (source of all knowledge) “It is the oldest continuously occupied settlement of European origin in the contiguous United States.” Before historic Jamestown. And Plymouth rock. It was founded in 1565 by Pedro Menedez de Aviles. Spanish. Which is interesting for those of us who have lived in the Virginia/Maryland area. You would think, based on the size of the tourist attractions, that historic Williamstown (great Commonwealth of Virginia) was number one, but it was number one on the English pop charts, not the rest of Europe. But it appears that the English have the better PR agency and got their ‘discovery’ put in the history books first, while Spain was relegated to ‘interesting if you live in Florida.’ But St. Augustine is trying hard. Everywhere we went we heard about how this place is the FIRST place discovered in America (other than, you know, the people that were ALREADY here…but we digress). And how the Spanish had the first Thanksgiving WAY before it happened up north. Etcetera. Etcetera. 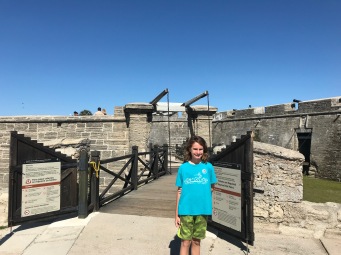 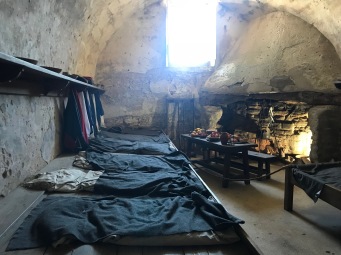 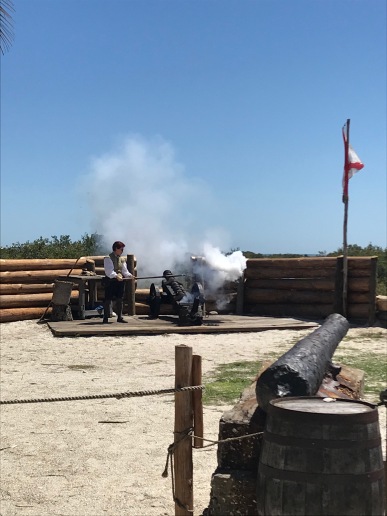 And the place is pretty amazing. If you are an architecture fan, this is the place to be. Old buildings that are in great shape are all over the town. If you like forts, they have one right downtown and it is in great shape considering it is hundreds of years old. And, best of all, it has the fountain of youth. Which you can visit (for a $20 entrance fee, naturally). Surprisingly, given the average age of the population of Florida in winter/spring, there wasn’t a line to get some of the mythical water; we were able to get right up to the spring, pull out the magic dixie cups and drink from the fountain. Neither the smell (sulphur or ‘rotten eggs’) nor the taste (mineral) were magical. But I assume the more powerful the elixir, the worse it tastes, so this should be awesome. We didn’t see any immediate changes after quaffing our beverages, but this may be longer acting. We await anxiously our return to our younger days.

Around the fountain of youth, a park has developed with attractions that you can see that extol the history and virtues of Florida. Among which, if you ignore the ‘Florida is GREAT,’ propaganda, has some pretty neat stuff. We saw a working blacksmith and got a smooth bore musket, cannon and crossbow demonstration. There were about 10 whole people in the entire park; pretty good day.

He doesn’t need this…

We were here first!

We also learned that after days, weeks, months on the boat, climbing up 291 steps to the top of the lighthouse was not a trivial task.

We topped off the day with a mini-golf tournament; the winner gets to pick the restaurant tomorrow. Jan cleans our clocks. 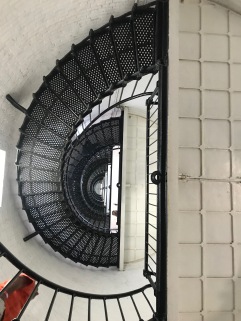 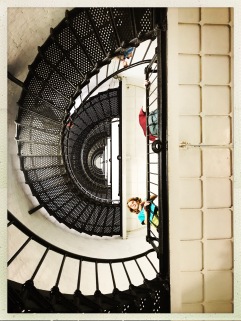 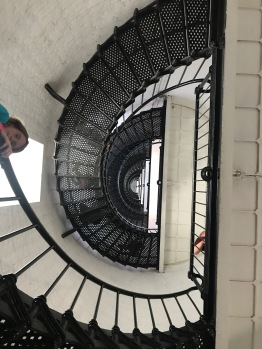 Day 2 was filled with more walking around the town, including a 3 mile walk down to the closest books store; we have burned through all our reading material on board. When we got back to St. Georges street, we ran into the crew of S/V Schole…they arrived earlier in the morning and, along with S/V Irish Rose, were spending the night. We went to lunch, then met the kids at a local park for afternoon of kid time.

Day 3 was Daytona day. We picked up a car for the day, dropped Jan off at her haircut, and AJ and I headed to Daytona for a tour of the speedway. It was impressive, but not as good as hoped. We hopped on a cart and got a 30 minute tour of the facilities and the track, but didn’t get to walk on the track (especially the 30+degree banked turns). The bar for tour of sports facilities was set really high at Green Bay and while this was interesting, it fell short.  Maybe we will return to see an actual race, or to drive one of the cars! 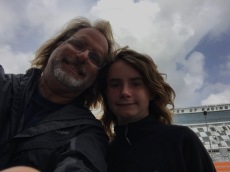 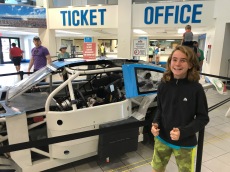 We were back in St. Augustine by 1:30pm, did shopping for provisions and returned car. Jan knocked out a couple loads of laundry while AJ and I schlepped water to the boat, 10 gallons at a time. And we managed to score some meat pies at a local coffee shop. They were called ‘Aussie Pies,’ and who knew that the Australians made such great food! It goes on the list of top 10 foods of our tip. We returned the car, headed back to the boat, which is where we stayed; the day was rainy and very windy, as predicted. St. Augustine is the oldest city in Florida and, as far as we are concerned, the best one as well.

1And our fuel burn rate reflected the push against current (and Jan’s habit of cranking the engines higher and higher as the current gets stronger). We burned about 1.1 gal/hour, a 31% increase over our ‘non-current’ burn rate. This is similar to what we saw on the Ohio river as well.