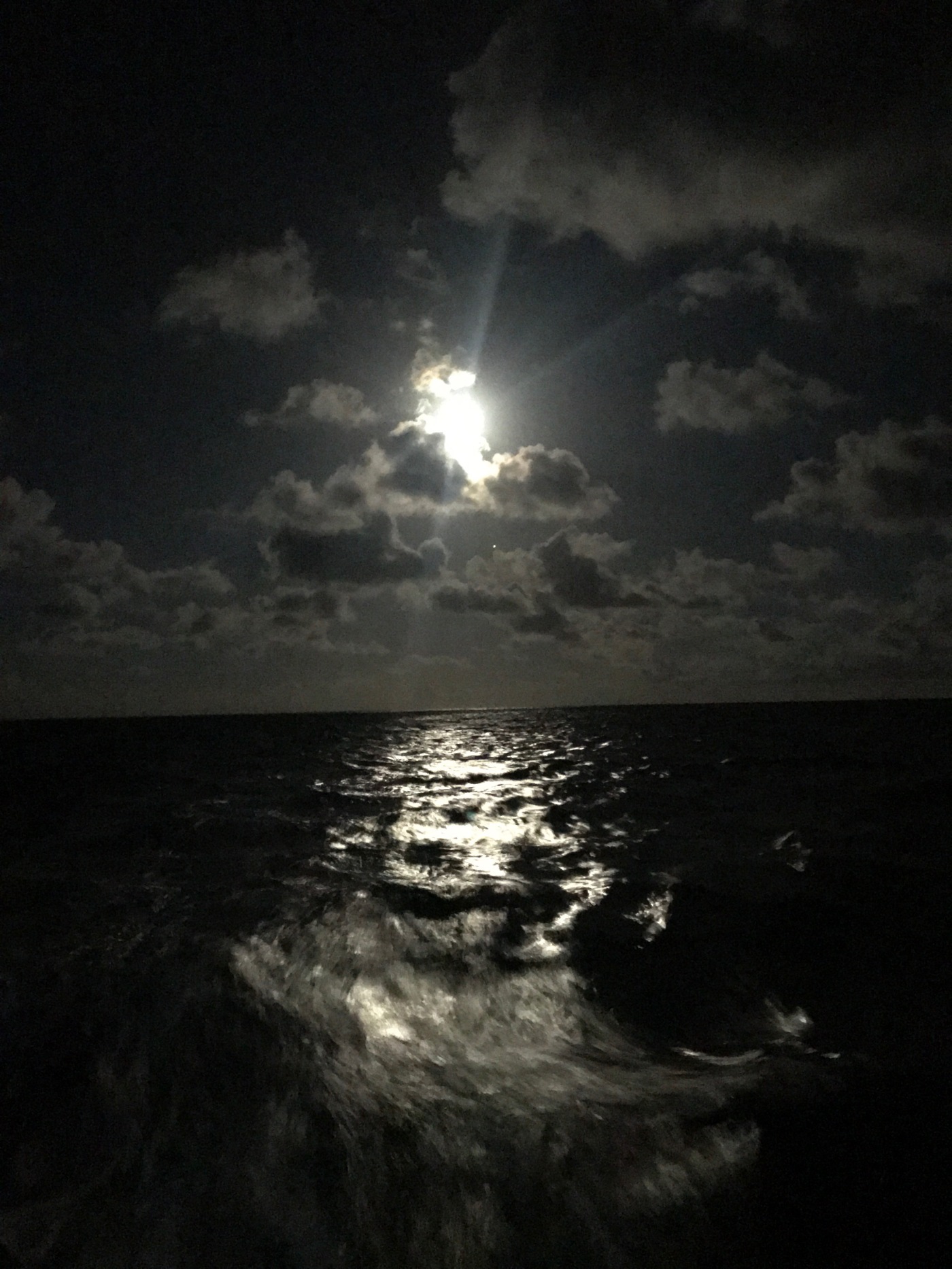 We are on the third of our planned three day push back to the USofA. First two were short days with stops at anchorages. Last day? All day and all night back to USofA. Across the big bad Atlantic and the gulf stream.

So here is the deal. We have 129 miles to get to Ft. Pierce, Florida. We can leave at anytime, but we want to get to the Ft. Pierce inlet when the tide is rising (water going into inlet) or when it is slack (not moving one way or the other). And we want to do it when there is sun in the sky. Looking at the tide chart, we have about a five hour window from 8am to just after 1pm that meet those criteria. Backwards planning from a 10:30 am arrival (dead in the middle) at 5.5 knots (20ish hours) means we need to leave about noon from Great Sale Cay, and that gives us a two hour stop for dinner/dog walk at Mangrove Cay, which is about six hours away. Noonish sounds good. One more overnight for this trip!

Our route actually takes us south of the straight line between Great Sale Cay and Ft. Pierce. We could go as the crow flies, but we know that the gulf stream is going to push us north, so we are willing to stay south a couple of miles and then run with the stream using its current to get some extra speed. The wind is forecast for 10 knots out of East during day then 10-15 knots out of ESE at night. Directly behind us. Waves? In the gulf stream forecast is for 3-4 feet, 7 second period. Also behind us. Sounds lovely.

Our anchorage had 15 boats in it when the sun went down. By 10am we were one of two boats left. Morning was filled with multiple walks for the dog, school work, making meals for the remainder of the day. Lucky and I took the dinghy back over to the beach and on the way saw a Manta Ray–the thing flew past our boat (figuratively…it swam) and was bigger than the dinghy. Scared the crap out of both of us. 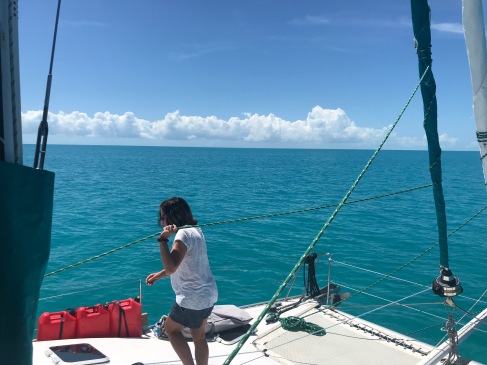 Bigger clouds to the righ

Whispy clouds to the back

We leave Great Sale Cay just before noon under a glorious blue sky. To our west and north there are a few wispy clouds. To our South we have some cumulonimbus clouds that pop up and dump showers, but they are few and far between and look like the ‘non-lightening’ type. Least we hope so. The wind is from the ESE at 4 whopping knots and the water is basically flat. The small wavelets are all behind us, for now anyway.

We made it to Mangrove Cay by 4pm. As its name implies, it is a bunch of mangroves on an island. As we approached the island, we noticed that it looked suspiciously like the island in the introduction to “Gilligan’s Island.” Maybe this would be a bit longer than an three hour tour… But instead of big pal trees, it was all small scrubs, all the way to the waterline, but since it was low tide, a sand bar appeared and we could get Lucky to shore for one last bathroom break. We made a big pot of spaghetti and some garlic bread and carb loaded ourselves before resuming our trip to Florida. By 1745 we were pulling up the anchor and resuming our trip.

We would be on the banks for another five hours or so before hitting the deep water of the gulf stream. Sun went down and it got dark about 7:30 and at 9pm the moon came up–almost a full moon providing a ton of light. Our mainsail was still up, but at 10pm we pulled it down–the wind was directly behind us and couldn’t make up it’s mind on which side to hit our sail so the main was flapping back and forth. We were now a (slow) motor vessel. At at 10pm we were off the banks, depths went to hundreds of feet and we turned slightly north. We were aiming about 20 miles south of Ft. Pierce inlet letting the gulf stream push us north. 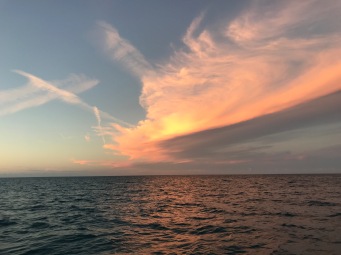 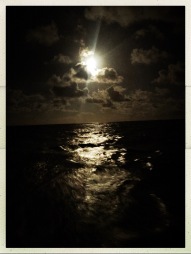 Jan and I switched off throughout the night and it was, unlike our crossing on the way over, quiet. We saw less than a half dozen boats on the crossing, and all were miles away from us. Waves were 3-4 feet but behind us; a following sea! It pushed us along towards our destination. Gulf stream picked up about 1/3 of the way across and our speed went from 5-7 knots to 7-9 knots (and higher depending on the waves pushing us along). We were flying.

Just after sunrise the amount of boats (smaller) picked up as fishermen came out of the inlets to head to their fishing grounds. And at 8:30 we were heading into the inlet. Conditions were great–current picked us up by two knots and pushed us into the channel. People in the channel were a bit less than great. One benefit about the Bahamas and their lack of channel markers is it is harder for fisherman to use them as objects to fish around. Here in the US, we have lots of great channel markers, and as a result, lots of fishermen between the markers. And, as a special added bonus, we had boats of the bigger variety making their way up the wrong side of the channel. Lovely way to return to the United States.

Our stop for the near future is a marina at Ft. Pierce, FL. We call in and get our slip assignment and make our way to the fuel dock for a top off. Our slip assignment is on a long dock between boats–after three months of anchorage, we are going to have to parallel park this thing…whee!!! We get in just fine and head to the office for the next thing we haven’t done in a while–fill out paperwork.

Back in the USofA

But by 10am and after just about 23 hours of travel, we are checked in. I call customs, get a random number assigned to us. Then we all climb our weary bones into an Uber and head to the local airport where we finalize our checkin and it is official. We are back in the USofA.