We leave Black Point after a week and begin the last leg of our trip south to Georgetown; our farthest point south of the journey unless AJ tells us we can continue on for another year. We plan on a day to Farmer’s Cay, then out into the Exuma Sound and a long day to Georgetown.

Our trip here was uneventful. We didn’t leave until later in the morning for three reasons. First, it was a short trip so why not sleep in. Second, the winds were above 20 knots early, and the forecast said that they would decrease to 15 knots later in the morning.1 And finally, it was the day after our Rum Punch experiment and I was moving a bit slower and more gingerly than usual. I really wanted a nap more than anything. That and to find the small animal that died in my mouth during the night.

We departed our anchorage at straight up 1100, turned to the SE and put up the sails. The wind was behind us and pushed us slowly to the point of land that we had to round; fine with me. Slower is better. And today I prefer no rocking. Upon reaching the point, we turned to the left and the wind ramped up to 18 knots gusting to 23. Boat started taking off and some little waves bounced us along. Just what I didn’t want. We had S/V Mahi ahead of us (again) and they were on at straight line to the destination. We couldn’t hold our line to Big Farmers Cay, so we set our direction on the way we could sail and when we got close, tacked and then motored in behind the Cay.

There was one other boat at the anchorage and before long she left and we were alone.

Three beaches to the front of us to choose from. All of us went to shore at the Northern most beach in the afternoon. There were a couple of goats on one end of the island and we avoided walking Lucky that way–he and goats weren’t getting along.

Next day Lucky gets his morning walk, gets lost and we take an hour to get back to the boat to begin to get ready to leave. The original plan was to head out into the cut and make our way south, but because of our late start we got to hear some radio chatter from other boats that were heading out into the cut. The general gist of their conversations were along the lines of “Holy crap these waves suck.” Discretion is the better part of valor–instead of heading out into the Big Bad Atlantic, we turned and headed south, keeping on the inside of the islands. But not too far; we headed south about three Cays, about four total miles, in some pretty shallow water. Two highlights from the trip.

First was our genoa. We went to pull it out to motorsail south, but when Jan tugged on the starboard genoa sheet, the sail would not unfurl. It came out a little ways, but something was causing some serious friction and we decided to leave it where it was and take a look at it when we stopped. Flash forward a couple of hours when we get to our anchorage and we head up front. The roller fuller has an external sleeve which has a guide into which the furling line feeds and wraps around an internal cylinder. Around the internal cylinder is another sleeve made of plastic and this had gotten bent the day before in the bigger winds and this was causing friction against the rope. The three of us broke it down and put it back together and got it working again. AJ had the key job…he was the one that was responsible for putting his hands under every screw as a final barrier to keep the screws from falling into the water. 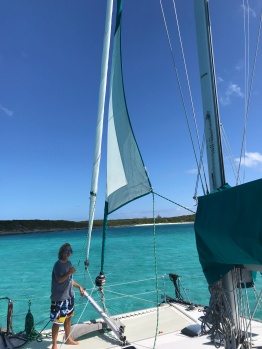 I know this isn’t right…

Second was visual pilot rules. Explorer Charts are what we use here in the Bahamas2. Jan was up front reading the water color and looking for where we were going to run around. We still get some stress when we head out over shallower water, but it is pretty amazing to be able to follow the blue/green stream of deeper water through white sand banks.

We ended up anchoring behind Rudder Cut Cay with two other boats; one of which was S/V Mahi. For a little while, anyway. On our charts, this island is marked as private, and on land, there are signs that say the same. But like a lot of other places, the grand plans for the island were scuttled and the island is abandoned. The rumor was that the dude who owned it was a shady character, got into some tax liability with the state of Florida, put up the land against his debt and now Florida owns the island. And island with a bunch of trails and roads to explore. And, as an added bonus, someone (we heard it was David Copperfield) paid for a sculpture of a mermaid playing a piano and sunk it in the water right by where we anchored. So we had that going for us.

So it was a snorkel and hiking day. Exploring caves, looking at the mermaid and a stroll to ocean side beaches to get some more shells. In the late afternoon the crews of the now 10 boats that had suddenly appeared outside the cay met ashore for an evening beverage and to watch the sunset.

Tomorrow–we actually leave for Georgetown. Unless the waves stink…then all bets are off!!

1As we set our boat up for the sail, we had the discussion of ’to reef’ or ‘not to reef.’ And, as a side note, if you are having the discussion that the answer should be ‘to reef.’ We did not. Rookies.

2I may have said this before but it bears repeating. For navigation, we use Navionics on everything: Chart plotter, iPad and iPone. When we got ready to come to the Bahamas, we bought the Explorer charts in paper form. The plan was to use the explorer charts to setup our routes, figure out where to anchor and then use Navionics on the chart plotter, as normal, to get boat into the anchorage. Except the maps on Navionics for the Bahamas are just short of useless. They are good for long passages or deeper water, but when it comes to routes that go over shallow areas that require VPR2A (visual piloting rules), they are horrid. What we see in reality matches the Explorer charts, but not Navionics. One example. As we were heading towards Big Farmers Cay, our chart plotter showed a sand bar with depths of 1-3 feet running for a mile or so in front of the Cay. No such sand bar on explorer charts, nor could we see the white strip in the water. And S/V Mahi, with their 5 foot plus draft, headed right over the ‘sand bar’ without any problem. Because there was no sand bar.
So we ended up downloading iNavx and the Explorer Charts on the iPad/iPhone to use for navigation down here in the Bahamas.

2AThe VPR areas are routes through shallow water that often has shifting sand and requires (or at least begs very strongly for) someone up front to make sure that nothing is in the way. The explorer charts show them clearly. Navionics may or may not show them and they may or may not be accurate. In these areas, Jan and AJ head up front of the boat and point in the direction that we need to go. The closer we are to running aground, the more frantic the hand and arm gestures.

Bahamas, Jim, On the trip, Underway