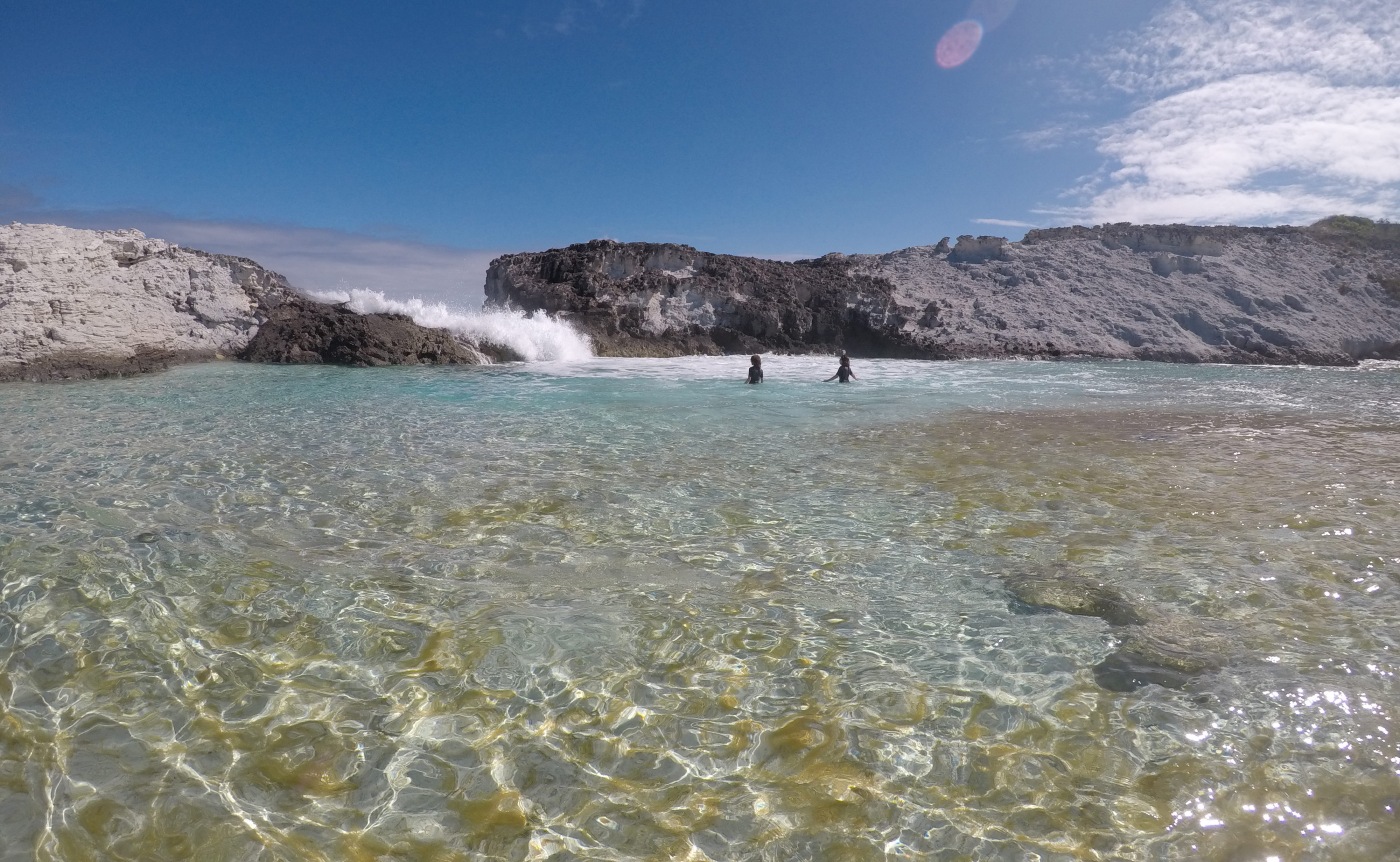 I gotta say, this place is just about magic.

Yes. The wind blows incessantly. The waves slap against our boat and the current whips us around our anchor. And the salt water irritates the crack of my rear end. But oh my lord, this is gorgeous. Why have we not been here before now?

If you hate to read, you can watch a short video that hits the high points without you having to read through the details.  But if you are at work, feel free to continue!

Cambridge Cay is an island at the south end of the Exuma Land and Sea Park. It is only six miles as the fish swims, but about 12 miles for us. Still a very short day. Wind is coming from the East at about 15 knots, so we get another sail day. Who needs motors??1

So at 0900 fire up the engines and turn to leave Warderick Wells. We get our main up easy and slow sail out to the WSW for three miles at which point we will turn to the SW, then S, and back SE. When we make our turn to the SW we actually jibe, or put our stern through the wind. Which is not something we like to do, but we setup for it and were ready and the main came through nice and smoothly. And we discovered that our boat jibes about as well as it tacks–not well. It will do both, but it needs some help to stick the move. Usually that is the genoa that we use to pull us through on a tack, but we had yet to pull out the genoa on this day. So when we executed the jibe, the boat went ahead and continued to round up into the wind. Not the way we want to go. Head slap. Engine on. Throw out genoa. And head back to the direction we want to go. Every single day we learn multiple things. Every single day.

Rest of the sail was easy peasy. We made good time for eight(ish) miles and then we pulled in sails and motored into the wind through some shallows and into our mooring field. We had to wait for a monohull to clear a narrow spot so we bobbed in the water a bit, but just after noon we were set for the next 2-3 days.

We were in another mooring field with about 15 balls. There were five other boats in the anchorage. One ginormous motor yacht that had pulled along side a tender almost as long as our boat, two jet skis, a float, multiple paddle boards, and that had a young lady on the back deck jumping rope. Which she did for an hour. On the back of a boat. There were two trawlers and one other catamaran. We parked next to the catamaran and sighted the elusive ‘kids’ on the boat. We ate lunch, dropped the dinghy and as we were piling in our dinghy to take the dog to shore, Matthew, the owner of the cat (Carpe Diem) next to us, yelled over at us. We puttered on over to say hi and he wanted to know if AJ wanted to come aboard and play with their son.

Three things we noticed as we came over to Carpe Diem. First, they were flying a Canadian flag. Second, their port of call was Montreal. In Quebec. And finally. Matthew had a French accent. Another boat from , , Canada. But unlike the previous group, Matthew and Julie were traveling alone and their son (Sirius) was looking to play with anyone. Just like AJ. Sirius didn’t speak much English (according to Matthew and Julie), AJ speaks effectively zero French (and that is not the fault of Anne Marie, Anais or Celine) but he was game. Jan and I headed to shore to explore the island. And amazingly enough the boys communicated just fine for the next three hours. As did AJ with their two daughters.

So AJ got to play with actual kids while Jan and I explored and cleaned the boat. We agreed to meet up with the crew of Carpe Diem at 3:15(ish) so that we could dinghy over to the Aquarium for some snorkeling.

The Aquarium is a small reef off a random cay to the north of us. We had to go across a cut and the wind was blowing pretty good so we ended up rolling over huge rollers taking on copius amounts of water as we rolled. This would have been adventure enough, but we had more in store. We got to the reef, tied off to two mooring balls placed their for dinghies and hopped in the water. And found out why they called it the aquarium–it was like swimming in one. Fish everywhere and right next to you. A colorful reef with more fish hiding amongst the rocks. And no sharks (that we saw). I tried to take a movie of the event and got a little, but I was so overwhelmed by the sights that most of the footage is of my hand with the sound of me oohing and aahing into my mask as we see something else. It was incredible.

Back into the dinghy, bounce back to our boat and we agree to head over to Carpe Diem after dinner. We spend a really nice couple of hours with Matthew, Julie and the family and then head back for some sleep. They are heading south in the morning–hopefully we will run into them again. 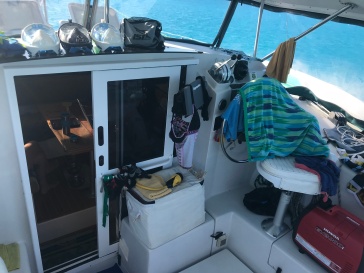 Morning comes and we didn’t sleep well. The ^*^&@#$ motor yacht kept ALL of his lights on the entire night and so, of course, had to keep their generator running all night and both the light and the noise were coming in through our hatch. Then at just after six am we were awakened to an airplane landing on our back deck. OK. He landed just off our back deck, but think about what it would sound like if an airplane landed just down the hallway from your bedroom. Apparently he had a package that needed to be delivered to the motor yacht. And once delivered, he turned and took back off. Pretty cool to watch, just really wish he had done it at like 10am.

So we are up. Breakfast made. And we lay out the plan. First stop is high tide at Rachel’s bubble bath. It is about 2.5 miles to the southeast of our anchorage, so another dinghy ride across a cut (big waves) to go see a pool that has bubbles made from waves breaking over rocks. Doesn’t sound great, but we have heard it is pretty fun and we have absolutely nothing else to do so at 1030 we are heading out.

And the trip across is, as Don once said, sporty. Big waves. Lots of wind. We slog across and it is a thrill ride in and of itself. We find a random beach, pull on shore and head to the ocean side, unsure of our actual destination. But we have no place to be and no timeline to be there, so we wander a bit aimlessly until we stumble upon the cove with the bubbles.

It rocks. Literally, actually, since you sit in a pool of water behind some rocks as the waves crash over them and into the cove, creating bubbles and a heck of a good time. Doesn’t sound like much, but it is the best part of sitting in waves–you get the splash, but not the dragging across rocks/sand and undertow/rip current pulling you out to your death. We hung out there for awhile, talked to a young couple that stopped by as well, then headed back to the boat. Dinghy back was much less eventful–we were going with the waves!

Jan and AJ await next wave

A dip after the bubbles.

Lunch and much laying about/napping in the early afternoon. After all, why rush? We have no place to be? Then at 3:30, we don our shorty wet suits and head back towards the cut to the south to explore some caves at low tide.

These caves appear as if by magic when the tide drops, and you can swim into the chambers and explore the island from the inside. It should be done, it is noted in the guides, at low tide and in calm seas. Well. We had one of the two anyway. When we got to the caves, the waves were bigger than expected, but we went ahead and went in anyway. I would like to post hours of movies of us exploring, but have just seconds, because that is all the longer I could spare my hands; rest of the time I was keeping myself from crashing into the rocks.

Back to the boat, celebratory dinner (WE LIVED!) and then to bed. We certainly are tired at the end of each of these days…

Monday dawns and it is the best of the days we have had in the park to date. The wind has died down to under 10 knots. The water is flat. And blue. And clear. The sky is without clouds.

Jan and AJ sleep in way past 8am. By this time Lucky and I have been up, headed to a sand bar to knock out our morning constitutional (Lucky, that is), coffee is brewed (and consumed), breakfast is complete and I’m pacing around ready to start the day.

Which is enough noise to raise the dead, or in this case, Jan and AJ. There is a bunch of whining and moaning, but after a couple of hours, both of the lazy-laze-abouts are ready to head out. The plan for this morning is to head back north, snorkel over a plane that mistook the blue water for a landing strip, go back to the aquarium, and look for a geo cache on a close island. Then back for lunch.

Which is pretty much our day. We dinghy out to the airplane which would have been a lot neater had there not been a very large barracuda guarding the doorway. So we took our pictures, paddled well away from Mr. Cranky, and then got underway. To the aquarium which we had to ourselves. Then to (not) find a geocache.

Jan ties us to dinghy mooring 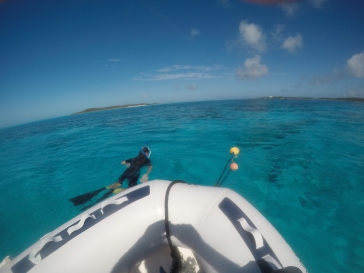 Heading off to see sites

Back to the boat. We hung out as the sun went down talking to our neighbors and looking down into the crystal blue water. For the first time on the trip, the water was flat calm and it was like a magnifying glass into the sea. We could see the bottom, which as 10’ below us, like it was a arm’s distance away. We could see a shark coming out to feed and an enormous flounder who knows that we can’t catch him and was flaunting the fact.

The bottom–10 feet below us

1Ummm. Actually, we do. Like to get into and out of our anchorages, mooring fields or marinas. I see these dudes and dudettes sail up to their anchorage, drop the sails and the anchor simultaneously and BAM! They are set. And in the morning, they put up sails, pull up anchor (not sure of the order) and then they fall off and head off on their way. Not us. Motors on and ready to help us if/when we dork up sail management. Motor on when we leave and when we arrive. Hell–I just like to turn on the motor every couple of hours just to make sure the things are working!