Our time at the Pink Shell resort ended at 0726 when we pulled away from the dock. It was a quick trip with the tide into the Gulf of Mexico and another 35 miles south Marco Island. Jan was at the wheel when started into the channel that led to Marco Island and I took the wheel so she could arrange the lines. When I looked down at the speed, we were flying at almost eight knots and we were crowding a power boat in front of us…the current was fast with a full moon!

We had a reservation at the Marina at Factory Bay. We were in need of some fuel and the dock master told us to stop at the Pelican dock just prior to his marina. I called the place and a very nice lady told me to bring our boat around the dock and they would fuel us up. I had no idea what ‘around the dock’ meant, but when we pulled up it became obvious. Her dock was laid out with three slips for fuel for small boats on the north side, the face dock was for fishing boats and on the south side was about 45 feet into which we were to fit our 36 foot boat. Jan and AJ were posted on the deck with lines and two ladies of indeterminate age were on the dock. Jan got hers on cleat, no problem, AJ threw the stern line to lady #2 and she pulled us onto the dock. “Nice job” we told her. She cackled a 2-pack a day laugh and told us it wasn’t her first rodeo. And then she went to sit down with twenty of her retiree friends to watch the pelicans slam their faces into the water. 40 gallons of fuel at over $4/gallon and we were off to our marina.

The Marina at Factory bay is nice. Small, but nice. Floating docks that look to be new. Free laundry. Nice showers. And zero people. Like we saw five people the entire four days we were there, and two of those were the dock masters. It was our own private marina! And it was under $2/foot so not crazy expensive. It was about a 1/2 mile walk to anything, but all of us need the exercise. And did we mention that the laundry was free?

And it is our home from Thursday afternoon to Monday morning. Friday night a big cold front moves through and remains in place through Sunday afternoon and we aren’t going anywhere until that is done. The marina has a five day limit per stay, so we have to be out Tuesday. We watch the weather like a hawk for the weekend.

1Our marina didn’t have oil disposal on site, but there was a recycling center 20 minutes (by foot away). Lucky and I walked there and got a good laugh. The place is set up for people arriving in cars, not on foot. We walk in the entrance and there is a little hose across the driveway that will set off a ding to alert the dude inside that a car is up front. We, of course, don’t set off the ding. But there is a intercom box with a big sign that says ‘push button.’ So we push the button. And wait. Standing in the driveway. Waiting. Waiting.

Patience level reached, I step around the corner of the entrance and there is a window and I see a dude standing there. He looks up and sees a long haired, unshaven individual wearing dirty, stained clothing; carrying an old backpack with a garbage bag sticking out the back; and with a dog. I can tell he thinks trouble. He walks out, we have a short conversation and he takes the oil, but didn’t want to turn his back on me or Lucky. 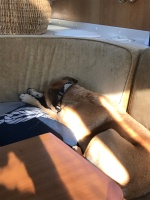