We have had the best luck on this trip when we stop at out of the way islands. Beaver Island in Michigan, Washington Island in Wisconsin, Hope Island in Canada. And now another gem; Cayo Costa. An island just outside of Fort Myers, reachable only by boat. And it was a winner!!

Our journey began at Marina Jacks at just before 8am. Jan and I took Lucky onto shore for one last walk through the mecca called Sarasota. Then dinghy back to the boat, pre-deployment checks and we are off. We had talked to the harbormaster about taking the Big Sarasota Pass out from the marina into the Gulf of Mexico and his recommendation was to go down to Venice, about 2 hours south, and then head out into the Gulf. There was some shoaling in the pass and if you were’t familiar with the pass, you could get stuck. So we planned to head south down the waterway. I looked in all our books and the four bridges on our route all were ‘on demand’ on Saturday morning. And it turns out our book was wrong. The first bridge, a mile from the marina, opened on the top and bottom of the hour. Which I found out at 0802 when I called them. So we had 28 minutes to burn puttering around in little circles.

So we revisited our decision to head south down the waterway. We could look to the side of our boat and SEE the exit to the Gulf. The day was beckoning! Why not head out into the Gulf?!? So I phoned a friend. In this case, TowBoat US. A very nice lady answered the phone and I asked her if we could take the Big Pass. And she said that we could, but unless we were following someone out, we would be calling her back, but not for information, but for a tow. Her recommendation was the same as the harbor masters–enjoy the canal trip down to Venice, then head out. Not wanting to get stuck, we continued to burn circles in the water until 0830 and then went through the bridge and on our way.

The next two(ish) hours were spent on the waterway heading down to Venice. It was a good trip–the houses were enormous and mostly shaped like concrete blocks with large windows and minimalist furniture. Once we got to Venice, we took a right and headed out into the Gulf into a spectacular day. Not much wind to sail with, but the sun was out, the water was glassy smooth and we were loving the trip south. We dodged crab traps for 45 minutes or so, then they disappeared and we put Andy on for the remainder of the trip until we reached the Boca Grande inlet.

Relaxing in the GOM 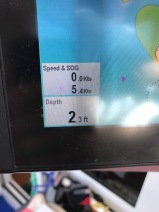 See the birdie standing in the water?? Not. Deep.

The markers for the inlet stretch a couple of miles into the Gulf, but when coming from the north, there appears to be a deep (enough) water entrance into the inlet that will cut off those miles. So we hug the coast and as we approach the inlet, follow another sailboat into the shortcut. And then follow the boat into Pelican Bay. Our anchorage for  two nights.

Pelican bay in alongside of Cayo Costa; an island that is a Florida State park and a pristine island relatively untouched by time. The bay itself is large and when we arrive, has about 30 boats at anchor. But there is a TON of space and we set our anchor. Then we drop the dinghy, load Lucky and head off to the State Park dinghy dock. We met “Pete” the Park ranger**1 and talk to him a bit. Cayo Costa is one of the last pieces of ‘old Florida.’ Land that has remained relatively the same since it was discovered. The only power is from solar and generators. Their are primate campgrounds and cabins. The island has miles of trails, pristine beaches, a couple of cemeteries and wildlife galore. Dolphins, Pelicans, Ospreys and Manatees play around out boat in the bay. Lizards, birds of all sorts and Alligators are all on the island. And bugs. Lots of bugs. Holy Jeezus how did early explorers survive ALL THE BUGS!?!?!?!?! Seriously…we were on marked trails and looking at the terrain, the undergrowth and getting chewed up by bugs and wondering how the explorers of old didn’t go crazy working their way through all the crap! We walk Lucky and then head back to the boat for dinner and bed. 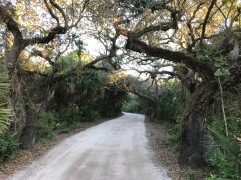 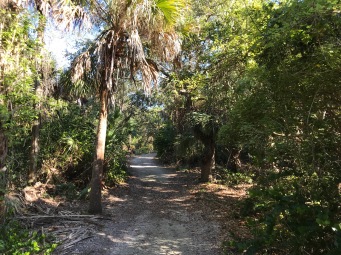 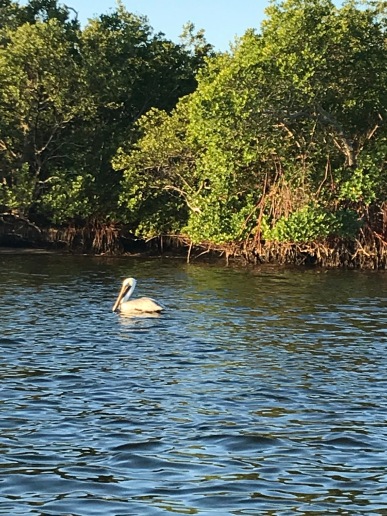 Sunday dawned bright and sunny. Highs today in the 80s. Good day to be in Florida. We are awoken by the blowing of dolphins as they swim by our boat. And by the splashing of the pelicans as they smack their faces in the water. We dinghy to the island and hike the Quarantine trail to the north end of the island. The Quarantine trail is so named because it ends at the old house of the dude that checked in ships that were coming from other countries that were flying the yellow, or quarantine, flag. They had to wait to clear customs to come into the United States. Now there are some old ruins and a fantastic beach.

On the way back, we ran into one of the three park rangers who told us to walk on the right side of the trail–one of the alligators was sunning itself on the left side and she didn’t want Lucky to be eaten. We moved out quickly to the dinghy to head back to our boat for lunch.

Then back in the afternoon with our packs and we catch the tram to the north side of the island to hit the beach. Which is spectacular. White sand. Lots of shells. And very few people. See…you have to take a boat to get to the island. Either your own, or a ferry from a couple of places. But on a Sunday, there aren’t that many people. We spend a couple of hours on the beach and then take the 4pm shuttle back to the other side, head out to the boat for dinner. And our show for the night is a ’supermoon’ hanging over the boat. 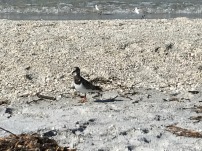 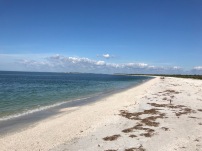 This is a top three stop on the trip! Again with the islands rocking it. We need to keep this up! 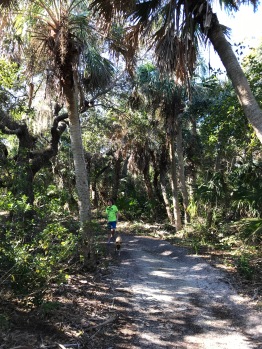