We took a wrong turn, ended up in Port Saint Joe, liked it so much we stayed for Thanksgiving!

We are slowly drawing closer to Carrabelle, and where we must make a decision on how we are going to go around the curve of Florida. Will we look for a good weather and cut the corner or wait for a good weather window and make small hops along the coast. Both courses of action require a good weather window because we will be transiting the Gulf. The intercostal waterway is going to come to an halt here in the next two to three moving days. This is a decision that everyone has to make and typically boats position themselves close to Carribelle to be ready to jump when there is good weather.1 Unfortunately there hasn’t been a lot of good weather windows and boats are getting stacked up in marinas. Which we found out when we left Panama City. Our plan was to head to Apalachacola, get a slip in a marina, spend Thanksgiving there and be ready to head out. But when we called for a slip, there was nothing available.

So we called an audible. Port St. Joe is a small community on the Gulf, it is about a 5 mile detour from the GIWW, and they had slip space for us. Which made the decision easy–we would head to St. Jo, provision, spend Thanksgiving and then head to our staging point later in the weekend when hopefully there would be less boats around.

Our trip to Port St. Joe was uneventful though there were sever thunderstorms all over the area. We managed to skirt any serious storms and rain, but were unable to avoid the current, so our relatively short trip took a relatively long period of time. 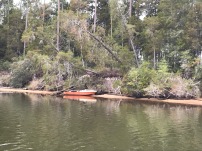 Port St. Joe itself is a nice town. Everything is wishing walking distance. Groceries, boat store, propane refill, restaurants. And the people at the marina are fantastic as well. There were five other looper boats on the dock when we arrived–maybe not so much off the beaten path after all.

We knew Wednesday was going to be a work day, so we headed into town on Tuesday evening to get a pizza at Joe Mama’s pizza place; wood fired and really good. And on Wednesday, we got busy. Jan and I headed to the Piggly Wiggly grocery store early to get provisions for our trip as well as supplies for Thanksgiving day. Then back to the boat where I picked up AJ and we ran to the donut store. AJ had seen the bakery the day before on the way back from the pizza place and asked if we could get donuts in the morning. I agreed, with the stipulation that we had to run a mile in order to earn the donut. He agreed and he, Lucky and I took off for a slow jaunt for donuts.

We made it to the store without anyone dropping dead, though one of the three of us was making some serious whining noises. We tied Lucky up to a bike rack outside the donut store and went inside. To almost empty racks. They had exactly two raspberry donuts and two bagels left. Apparently the day before Thanksgiving is a big donut day. The lady was super nice, gave us our two donuts, but AJ said he was too gassed to eat them, so we got them in a to-go bag and AJ and I headed out the door and back to the boat.

We made it almost all the way back to the boat when we realized we had left Lucky tied to the bike rack outside the bakery.

I ran back and found Lucky still sitting at the rack, looking at me and probably wondering “what the hell are you doing?” Effusive praise for the dog and we headed back to the boat.

Where Jan was finishing cleaning up the boat. Because it always needs a good cleaning. We grab a light lunch, cook some meals for later in the week and putter around the boat. Jan and I then take off to a local raw bar to get a dozen oysters while AJ kills monsters. On the way back we met Tammy and Mike, a Canadian couple that we keep crossing paths with along with about eight other loopers and we shared some stories with them.

Dozen on the half shell

1. We were dressed in shorts and t-shirts. The temperature was low 70s and though there was a wind, it wasn’t enough to get us to put on any clothes that had long sleeves and/or legs.

2. Our kitchen was much smaller. It consisted of two gas burners on a very small stove top and an instapot–a pressure cooker; all crammed in a 6’ x 4’ long corridor. So we cooked in shifts.

3. We were unable to participate in the Mish 5k run that set the table for the thanksgiving dinner. We made up for it by walking 10 minutes after the meal was complete.

Our menu:
Turkey breast. Boneless. Three pounds. Cooked in the instapot for 50 minutes TOTAL start to end. The grease and spices fell down to the bottom of the pot and formed the gravy (below). The turkey was FANTASTIC! Best we have had in forever, but that could also be due to the fact that we were hungry!

Mashed potatoes. Made in instapot (after turkey), potatoes then cut into small pieces with a knife and mashed/based with a fork/spatula combo. We don’t have a masher or a blender on the boat.

Jan’s sage stuffing. Made on our grill, which acted as the oven for the day. Also dubbed FANTASTIC by the group (of three).

Roasted brussel sprouts. Made on grill after stuffing and they rocked. Again–this could be more due to the fact than we haven’t had roasted veggies since we left Maryland!

Gravy: Dripping from bird combined with an insane amount of butter and a little of the gravy that came with the turkey.

Cranberries delivered in the shape of a can. Good just like always.

Pumpkin pie baked with love by the Piggly Wiggly. And topped with whipped cream straight out of the can.

Garden salad. Only one person touched this; too much other good stuff.

We eat our dinner and are finished, including cleanup, by 3pm. We manage to get out of the boat to take a short walk around town and then begin to watch “Stranger Things.” Jan and AJ both hate horror and/or suspense movies so this is really pushing their envelope. 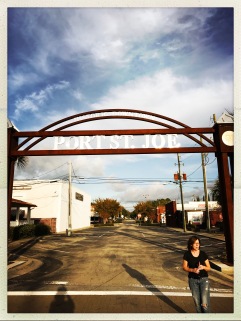 Walk through town after dinner!

Getting the stuffing ready!

1There are other options, of course. We could move out from Panama City or Pensacola or Mobile or Port St. Jo and move to Tarpon Springs. One of the boats we have seen a lot of did exactly that–they went straight from Mobile to Clearwater over three days straight. We also talked to a sailing couple in Panama city before we left. They had gone outside from Pensacola to Panama City and had a a bad night. Their plan was to head straight from Panama City to Clearwater later in the week. We are limited to about 250 miles (based on fuel), so we will look at Apalachacola or Carrabelle. 220 and 178 miles respectively.