We have stopped for a couple of days to celebrate Thanksgiving and to wait for weather to get better so we can continue around Florida.  I’m using this as a chance to catch up on some posts from our time in Mobile.  This is a recap of our side trip to New Orleans at the beginning of this month.

I have had the pleasure of spending four years of my life in Louisiana. My first duty station was at Ft. Polk1, just outside Leesville, LA. Never heard of it?

Just up the highway from Lake Charles.

Those two words conjure many things. Mardi Gras. Bourbon Street. French Quarter. Hurricanes (both the drinks and the storms). Jazz (both music and fest). And perhaps the word debauchery. Perhaps.

And most of those activities are targeted at adults. But we have a 12 year old with us and though he THINKS that he is an adult, he is not. And this is NOT the place that we choose for him to learn about what it is adults do when the lose their minds! Which means we get to see New Orleans in a whole different way; this should be fun!2

We took off bright and early Tuesday morning. We load Lucky into the car with us and he is beside himself with joy–we are going for a RIDE in the CAR! Which we do for 20 minutes, which is when we get to the kennel where Lucky will stay for the next eight days. Doggie jail. Sidney gets a two day reprieve. He will stay on the boat until we return and then gets put in the same kennel while we head to Minneapolis.

New Orleans is a quick two hour drive straight down I-10. West bound. Through the small part of Alabama and Mississippi that border the ocean and into LA, across Lake Pontchartrain and into town. We have a hotel by the super dome, but we are early for check-in, so we head straight to the WWII museum. Which was awesome. Jan and I had been here 15 or so years ago when it first opened and it was good then; it has expanded in a big way and now is great. A whole floor for the European Theater and another for the Pacific. The exhibits show the impact of war using footage, pictures and stories from people who were there. We spent a couple hours there before Jan and AJ pulled me out. Again.

Quick drive to the hotel, early check-in and we are out on the street walking to the French quarter. We do a quick stroll down Bourbon street which, at 1pm, is relatively quiet and, as an added bonus, the stench is not yet overwhelming. We find an oyster bar and head in for some raw oysters, po boys and gumbo. Perfect New Orleans lunch. Then we walk through the French Quarter. Our afternoon activity is a Segway tour of New Orleans; two and a half hours of precariously balancing on two wheels while trying not to hit cars (parked or moving), pedestrians or each other. Our concern initially was for AJ and making sure that he didn’t cause any damage. But it quickly switched to focusing on our machines–AJ was more than just fine; he was doing better than the big people.

Mississippi towards the end

We look wicked cool in our helmets

Hanging out in the French Quarter

Motoring down the streets

We whipped through New Orleans including a trip along the Mississippi river. Which down here looks a bit different than what we saw 800+ miles upstream. For one–it is wide here. And though we couldn’t see it, our guide told us it was over 200’ deep where we were standing. The barges/tows that had overwhelmed us up river were cute here compared to the large ocean going ships that were making their way up and down the channel. We finished our tour, did some quick shopping then back to the hotel to lay about our beds and watch TVs that had actual channels with content on them, use showers that in which we didn’t have to worried about being disturbed or running out of hot water and flush toilets that worked automatically! AWESOME this technology!

Day two we wake early, and head out for a morning of shopping, and coffee/beignets before our afternoon swamp tour. The first two are pretty straightforward–we walk to Jackson Square, hit the Cafe du Monde for caffeine and beignets. Then to French market. Then back to the hotel for checkout and the 45 minute drive to Slidell, LA for the swamp tour. 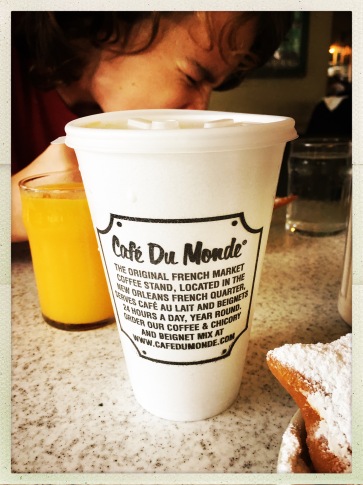 We had just gotten done with a whole bunch of miles coming down rivers; it would seem like the last thing we would want to do is head out into a swamp. But a couple of things that draw us. First, we aren’t driving the boat, and we are big fans of tours on boats that don’t require us to actually drive the boats. Second, we get to see actual alligators without looking for them while walking the dog.

We hop into our boat with Captain Troy. There are about 20 of us in the boat, 10 on each side. We get a safety brief: Don’t put our hands outside the boat and don’t stand up. And we are off. The boat has a 150 horse outboard which whips us down the river at speeds never seen on Serenity. We try to pretend we don’t like it, but there is something to be said for going fast.

We fly up the bayou into a cut and the trees close around us. Captain Troy tells us it is cold, and the alligators aren’t that active, but he promises he will find us a couple and he quickly delivers when we spy a 3 foot alligator hanging out by the shore. He/she/it ignores us as we pass by–apparently a boat o’ tourists is not a strange sight. We spend a couple hours on the boat and see all sorts of fowl and wildlife including wild pigs, raccoons, and more ‘gators. 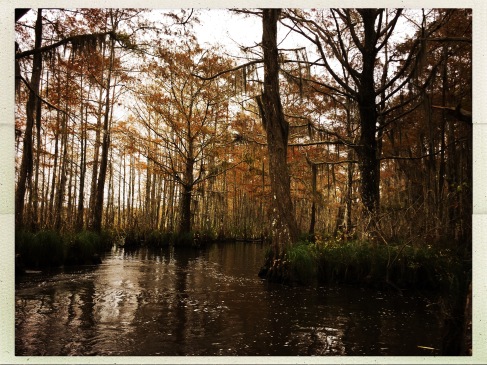 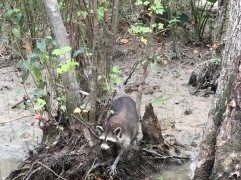 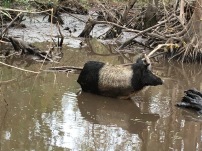 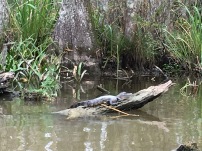 We also see the cajun version of fish camps/river homes. As we went up the bayou, we passed a number of small homes/trailers along the water that people use to fish or to get away from the home. Only way you can get to them is by boat, so they are quite rustic! And when the storms come and the water level goes up, these homes become submarines, so nothing that can’t be submerged is on the homes. The other thing we saw were ‘mobile homes’ which are kind of like ice fishing shacks in the midwest. These are shacks built on floats (drums or pontoons) that are towed wherever the owner wants to go. They can be placed and tied to shore as long as they aren’t on private land. So you could put a generator in the shack, put in your TV, small AC and small fridge and head out into the bayou to get away from it all. Or head into the bayou to escape the wrath of your spouse. It was the best part of the trip for all of us and a good way to end out our trip on the rivers.

“It’s not krooked, you R drunk”

Not on a bayou…

1And as a duty station in the late 1980s when we had literally hundreds of thousands of Soldiers in Germany, it was not the top choice for anyone. BUT I had nothing to compare it to, so I assumed that all Army installations were like Ft. Polk. In the middle of nowhere. Where you spend weeks at a time in the field. Where it is hot AND humid and somehow dusty all at the same time! But what I discovered was that it was actually fun. There was some sort of festival every weekend in some town close by. The people in Louisiana actually ate catfish and crawfish and they were GOOD! That it is a place where you never have to ask or hot sauce; it is always on the table. And a place where you can go rock out to cajun music in Mamou, LA on Saturday morning at a bar that is as big as most modern living rooms. Music played by a bunch of dudes that look like they won’t make it through the next set. The bar tended by tante (aunt) Sue who served and drank shots with equal measure. The dance floor prowled by sharks dressed like a bunch of seemingly harmless old men who ask if it would be OK to dance with your girl and then proceed to dance better than you can ever HOPE to dance. And at 1230, after (probably) too much beer and not enough music, you are kicked out into the brutal heat, humidity and sunshine; the bar is closed.

Finally, Ft. Polk was also where the nearest mall was an hour away, but where there were major cities within 4-5 hours that you can go visit on long weekend. Houston, Dallas, Shreveport and New Orleans. And New Orleans was the queen.

2Jan and I have experience New Orleans Pre-AJ. The differences? Less hurricanes. More memories from the trip. Much earlier start to the day and earlier end to the night! 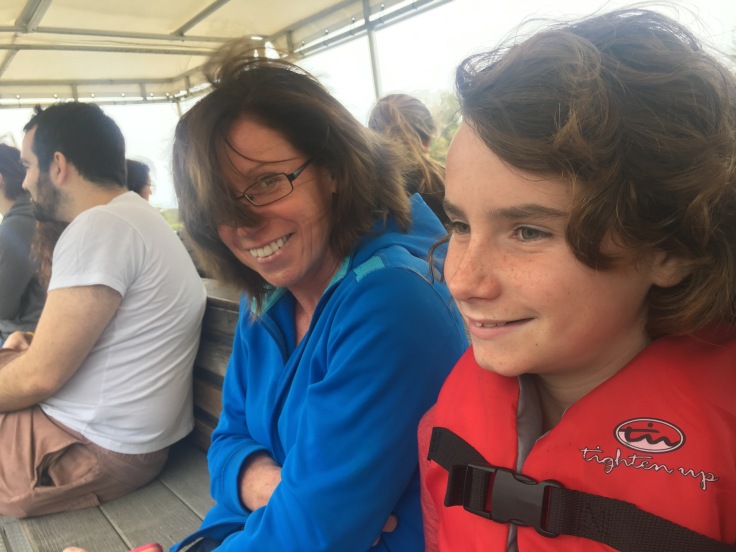