I wake up at 4am. Four in the freaking morning. It is dark. I can hear owls outside our boat. And I can’t get to sleep. I’m thinking of bridges. Three bridges, actually. Two 50’ and one 49’ bridge. Which we will transit over the next two days.

We just went over 1500 miles without a care in the world when it came to bridges, power lines or trees over the river. We couldn’t go fast, but we could go under just about anything. Now we have our mast back on our boat–GOOD NEWS! Bad news is that we have to look at the charts and check bridge and power line clearance to make sure we can make it under the damn things without taking the mast off our boat! And while we were looking at our route, we saw a note that said that when we got to Pensacola, sailboats that could not clear a 48 foot bridge should head out into the gulf and go around.

Well. Interesting. Our mast, according to the owner’s manual, is 47 feet above the water. Bare mast. Not including instruments (which we have) or the VHF antenna (which we also have, but it is pretty bendy1). Both of which stick up above the mast. Now I have never actually measured the height, I just have the manual. And I’m pretty sure that we have lost at least a half foot or so, or at least that is how low we look to be sitting in the water after we have loaded up all our crap. Stuff. I meant stuff. And we have already gone under a 55 foot bridge, but that was months ago.

So the plan today was to get up at the crack of dawn, brave the alligators to get Lucky into shore and then be gone when it was light enough to go so that we could be at the 49 foot bridge tomorrow morning (11/18) at low tide. To get us an extra foot clearance. But there was a 50 footer today on the way so we would get a good feel for how well our day tomorrow may go.

And we stuck to the plan. We watched the sunrise as we were under way headed east. We entered Florida at about 9am. Wind was blowing initially from the north, then switched to the north east and a bit into our face, so we didn’t make great time, but the day was nice, so no one was complaining. We were escorted at times by dolphins. First a pair, then later a family who cavorted around our boat. I wish I had a quicker finger for the camera–all the pictures are of a tail or fin going back in the water, but trust me–there was some serious cavorting happing in the water.

Our escort down the waterway

We looked at the tides for tomorrow and made the call to stop at Navarre beach for the day. It would make for a shorter day today and still set us up for low tide at 1030 tomorrow at the lower bridge. Navarre was also the 50’ bridge and if we didn’t make it there, or it was too close, we could anchor and then turn around and head for Pensacola and make our way out into the Gulf and around.

We arrived at Navarre at just after noon. And the bridge. We slowly moved under the bridge; me at the helm and Jan and AJ up front watching the top of the mast, ready to scream if we weren’t going to make it. But we did. With, it appeared, some room to spare. So we celebrated by anchoring outside the Navarre Park.

And now we have a whole afternoon left! Jan had gotten a package from Mark (who she worked with) delivered to Mark’s mother in Pensacola and She (Marks’ mother) delivered the package to a BBQ joint across the river from our anchorage. We hopped in the dinghy and headed off to rescue the package. Then we picked up Lucky and headed to shore for his daily constitutional. Shore was in the middle of a gorgeous county park that straddled Santa Rosa Island. Beaches on the GICW side (where we landed), and then a trail to the gulf side. Bad news for Lucky…no dogs on the gulf side. So we headed back to the boat to drop off the dog, change into swimsuits and then back to the beach to lay on the white sands of the gulf shores. 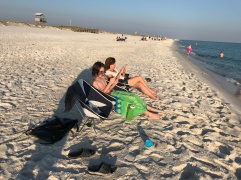 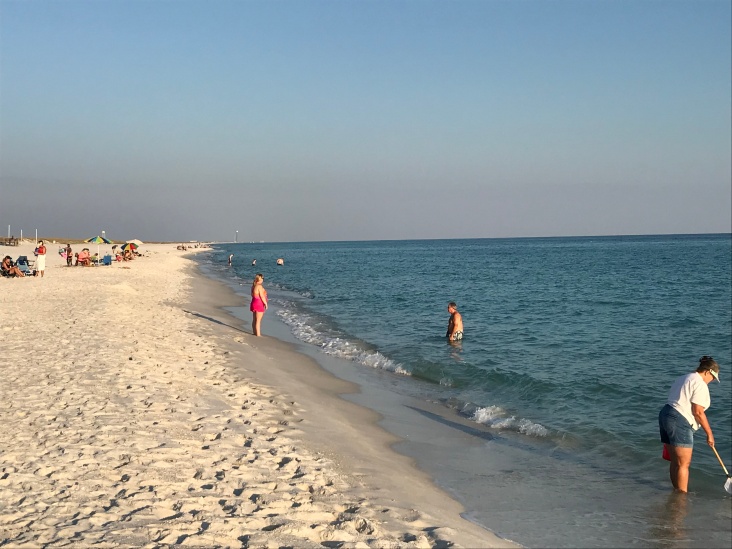 When we walked onto the beach, a nice lady told us to be careful…there were jelly fish and sting rays in the water. And that it was cold. We set up our chairs and AJ and I headed into the water and apparently the lady is not from a place where it is actually cold. The water was maybe cool, definitely not cold. We have had colder water in Ocean City in June/July! We swam, briefly, dodging a jelly fish. And we chased sting rays (while we were on the beach). Sat on the beach and gazed at our phones, because that is what we do as a society. And as the sun went down, went back to the boat.

Back at the boat we had a small celebration. It was my birthday and I was showered with love and (more importantly) presents.2 One of which will impact anyone deciding to visit us aboard our boat. I got a banjo. Which is what I have been clamoring (ironic use of that word when talking about banjos, no?) for one since we saw “We Banjo 3” at Irish Fest in Milwaukee. So now Jan and AJ will be tormented by my ‘playing’ of the music thingy.3 It was a fantastic day–not often I get to swim on a white sandy beach in November. Least in the midwest or east.

Tomorrow we may lose our mast on a bridge, but today? We are enjoying Florida.

1I am a retired Army Signal Officer. “Bendy” is a technical term for flexible. Trust me–you don’t need to look it up.

2I’m totally kidding. Love is better than material things. But I did get a banjo!!! And it is ironic that the loudest person on this boat (by far) has been given a device that will make him (if possible) louder and MORE annoying than before. And I have learned the first three notes to the deliverance song. Should have it down in the next five years and be ready for the next time around the loop and can mix with the locals in Kentucky a la ‘Deliverance.’

3For 10 days. Max. Which is about the extent of my attention span. Then, I assume, the noise stick will be used to fend off an alligator or some such predator. By Jan.