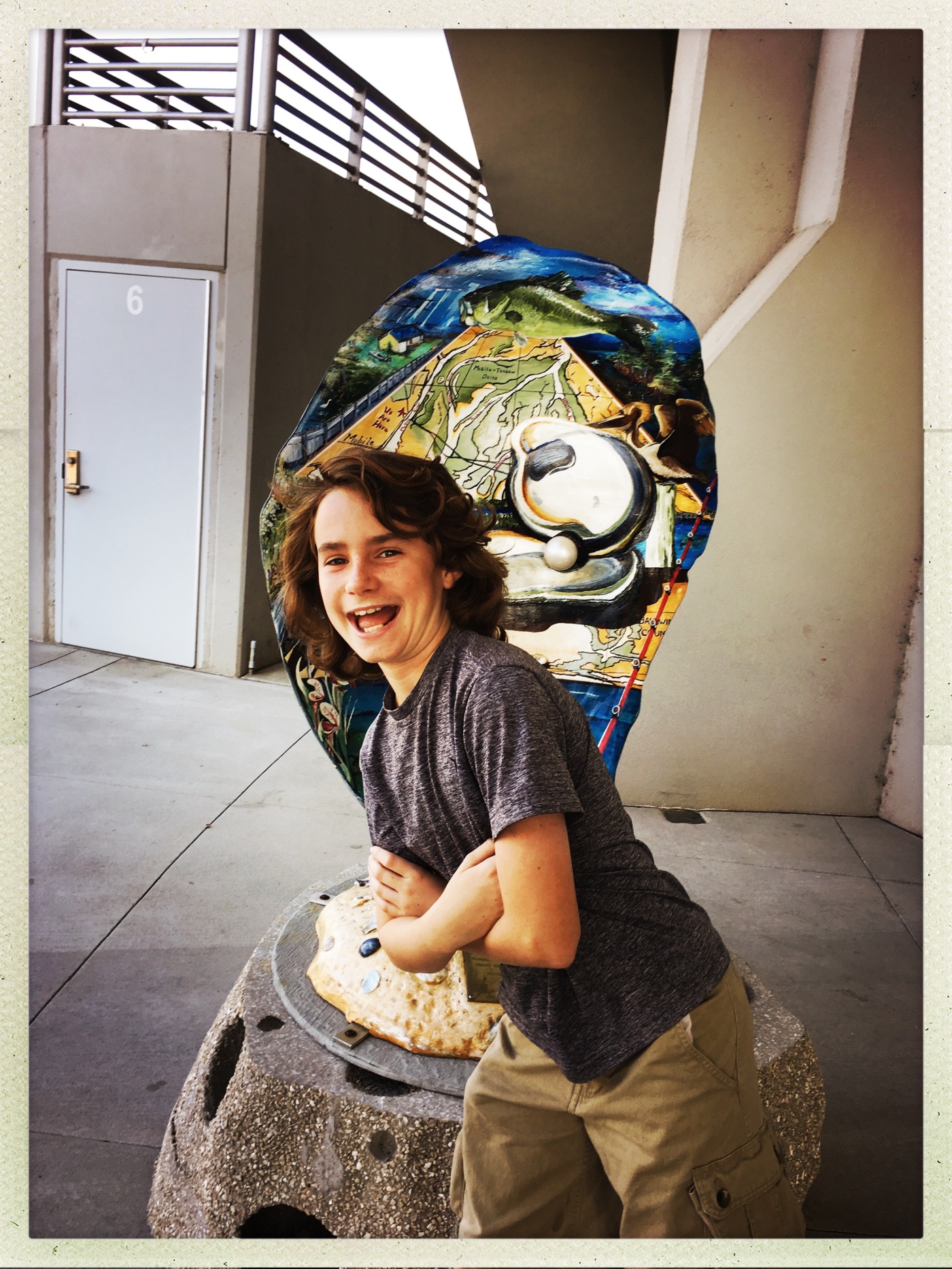 One thing we forgot to add to our list of top things coming down to Ten-Tom Waterway. Deep fried pickles. Dill Pickles. They probably aren’t specific to just the Ten-Tom, but that was where we first ate them. And we have had them here in Mobile. And I’m here to tell you, they are better than onion rings, fries, or (dare I say it?) cheese curds. AND they are healthy! I mean pickles are cucumbers. And cucumbers basically don’t have calories. And deep frying zero calories should mean zero calories, right?

Back to our story.

Friday night we arrive in Turner Marine, chased in by a line of squalls. We had prepped our boat for a port tie, but it turned out it was a starboard tie. Jan went ‘code red’ and got the fenders moved to the correct side while a couple of volunteers from neighbor boats held our lines. Lucky, not happy with how long it was taking, went ahead and jumped to shore so he could relieve himself. We were in. Some pasta and our boat was asleep early.

Saturday morning we woke up, sipped coffee and laid out the tasks to be accomplished before we had to fly to Minnesota. It was long. But we realized that we had made such good time down the rivers that we had a couple extra days to get our tasks complete. So we brewed another cup of coffee and relaxed a bit more.

First was to get a car. We have been using my points built up from travel with my old job but we are finally down to the final dregs. So we had to actually pay for a car. Which hurt. But we had a ton of errands to run, so we got a courtesy car from the marina and headed to the airport to get the car.

Then a blur of stores. West marine, petco, Dillards, Gamestop, random bookstore. Hours (which seemed like days) of shopping. Apparently if you haven’t shopped in weeks, you have to make it up all at once. But we made it all better by finding an oyster house that was having a happy hour special–dozen for the price of a half!

Sunday to Wednesday was spent focusing on getting our mast on our boat. First task was to find our mast in the yard and verify that it made it safely from Chicago to Mobile. Which we did; it was mostly in good shape though our loudspeaker on the mast was worse for the wear–it had gotten broken–we picked a replacement up at West Marine and replaced on Sunday. We also put on the radar (which we have been carrying with us in the guest cabin), put on the wind gauge, replaced the anchor light with an LED light and troubleshoot (and fix) the deck light. We also replaced our lazy-jack lines and other small lines on the mast. AJ and I managed to escape for a couple of hours and find a frisbee golf course.

On Tuesday, we were told, our boat would be second in the well and we should be started at 0900-0930. But we are learning that things like ‘start time’ and ‘duration’ are very flexible. The first boat wasn’t finished until after noon. We started to move our boat over to the well and I couldn’t get the boat out of our slip. We had gone in nose first into our slip and I was backing out and every time I got halfway out, our boat skewed towards the boats behind us (not down the aisle). I put it back in the slip and tried again. Two more times and we now have help from the people on the dock who are taking lines and pulling randomly on the them and shouting advice. We finally figure out that there is some shoaling in the middle of the channel. We get a good shove to get our back end around the shoaling and we are on the way. This isn’t starting well. Fortunately it ends well. The rigger is outstanding and with the help of a crane and two dudes, gets our mast up on the boat. More importantly, he tuned our rigging. And he helped us get our screecher sail up on the boat. And replaced our main halyard and furling line. Rigging and tuning took most of the day on Tuesday. Wednesday we ran the lines and got our boat back into a sail boat once again!!

Thursday we went and found a vet and kennel for the two four legged members of our family. I called a nice lady at the ministry of agriculture in the Bahamas and she gave me the rundown on what we needed to do. So paperwork filled out and off to Fedex. Looks like the animals will be able to come with us to the Bahamas instead of getting lost at sea.

Finally on Friday we decided to spend a day NOT doing anything related to the boat. So we started the day with a healthy breakfast at the southern mainstay, Waffle House. AJ had never been. I LIVED on Waffle House when I was a second lieutenant at Ft. Gordon, GA and am living with the repercussions ever since. Jan was not a fan. But she was out voted. It was all that I remembered. Grease. Fried. Waitress dispensing life lessons. Awesome.

And then we went to a maritime museum. So maybe that wasn’t such a stretch from the life on the boat. But I have to tell you that it was probably the best museum we have been to yet. It was the National Maritime Museum of the Gulf of Mexico: Gulf Quest http://www.gulfquest.org. We got to the museum, were the first patrons, and were outnumbered by the docents. There were five floors and five volunteers and three of us. We had our own private guide on each floor. The exhibits were all hands on events for those of us plagued/blessed with an inability to pay attention long enough to read a sign.

We spent hours there and Jan and AJ had to drag me out, but on the other side was the new Thor movie. With popcorn. Two thumbs up for two of us and the other gave one thumbs up for the washboard abs. We got some nachos on the way home and called it a night.

Saturday was another day of projects. Serviced one engine (upper and lower oil, replace spark plugs, replace fuel filter, flush engine) and lost the lower unit bolt to the other, so will need to work on that another day! Troubleshooting and fixing of the deck light, Jan and AJ sealed our back locker and took turns locking each other inside. We replaced the screecher sheet. Cleaned the boat. Twice. Called and ordered new chain for the front anchor. Cleaned the refrigerator and ordered a portable freezer. Dinner with Skinny-dipper and Patches. 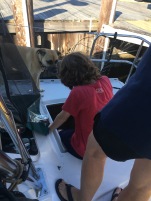 …Jan getting ready to lock him in! 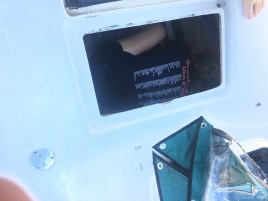 Sid is a big helper

Sunday was a beach day. Relax at Dauphin Island. We said good by to Patches and Skinny-dipper who where heading out on Monday. The night was capped off by home made pumpkin pie from Sydney on patches–she had made them in the toaster oven on their boat and they were fantastic! 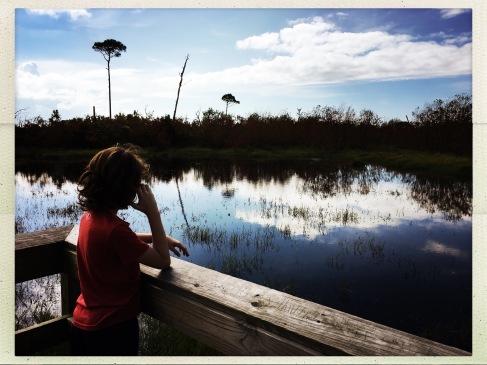