Forecasters suck and the heartland of Wisconsin: Kewaunee (8/5/17)

The forecast for Saturday looks good after the gale warning and the monster waves on Lake Michigan on Friday. Winds from the West at 10mph, moving to the southwest by early afternoon. West winds of any type make us happy–they will push us along nicely; we don’t want anything from the east. Chance of thunderstorms by 3:45 in Kewaunee, our destination. We should be in our new home in plenty of time.

We check one more time on Saturday morning and we make the green light “GO” decision for the day. We all are up, including GrandPa Chuck and AJ. We check out, head across the bay to the fuel dock to get a top off and then head out through the drawbridge and out into the Lake.

At 9am the day is spectacular. Sunny skies. Light breeze from the southwest and little to no waves. Perfect day for the 25ish mile run. And so it remains for a couple of hours but by about 11am the wind has moved to the south east. Right into the front of our boat. And over the next hour the waves build and we are once again back to heading into waves and wind and not making a lot of progress. Luckily we aren’t the slowest boat going–we pass another sailing catamaran on our starboard side flogging against the waves so we take some small solace. Fortunately it is a short run, and we make it to Kewaunee with no problems and are docked just after lunch, but I really am beginning to not like the forecasters all that much.

Our home for the night is a marina called Salmon Harbor. Coincidentally Kewaunee and Algoma (the next harbor north) are the center of the Wisconsin salmon fishing market. And Salmon harbor is crammed to the gills (pun intended) with fishing boats that have just returned or are getting ready to go salmon fishing. And our one, lonely sailboat. This was quite a change from our last marina in Sturgeon Bay. That marina (Centerpoint) was composed of majority of extremely large boats (40+ feet) that were meticulously cared for, spotless, and not many of them seemed to leave the dock on any given day. The grounds were equally spotless, the facilities top notch, and included a gourmet kitchen available for patron use. Conversely, in Salmon Harbor, 90% of the boats here are under 30 feet, and are fishing vessels used every day. People were in and out all day, fishing poles and equipment were being fixed and readied for next day of work and the people done for the day were drinking beer on the docks and talking to everyone that came along. 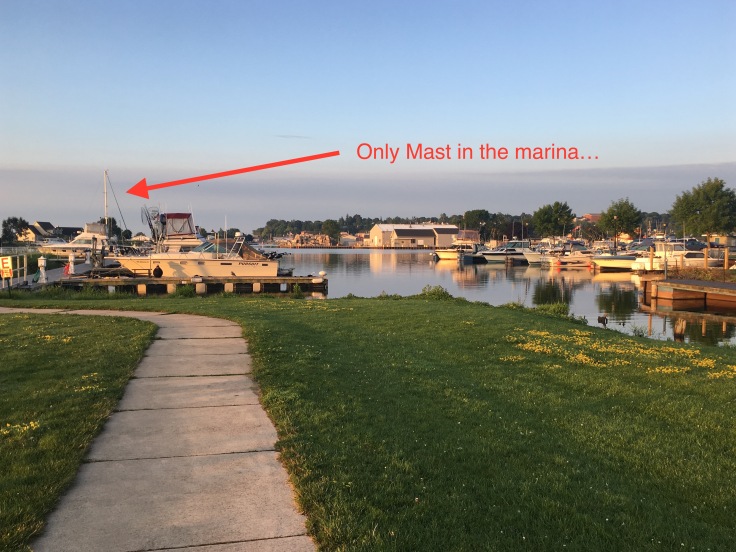 We got tied up at the dock and headed up into the town. This is not a tourist town. There are no fudge shops, nor a lot of shops, period. This is a town that caters to the people of the town–the fishermen and factory workers. First place we came to was a gas station with a fish smoke house next door. We went in to the fish store and were knocked over by the smell of smoke and smoked fish product. Mostly salmon, but also trout, whitefish and other unidentifiable fish part. We bought half a pound of the applewood smoked salmon and when we tried it, it was fantastic. And it was cheap! We asked the lady behind the counter if she could smell salmon or smoke anymore and she said she could not–working there ruined her nose for fish.

Just past the fish shop/gas station was the beginning of a walking trail and right at the trailhead was an enormous grandfather clock. No explanation as to why it is there or what it represents; it just stands there keeping time.

Up two more blocks and there is a mixture of closed stores, bars and small shops. And on this day a pack of harley riders sitting outside a local pub. Like 50-70 bikes with associated riders from the “Sons of the Devil Kewaunee Chapter” or “Lost Outlaws of Twin Rivers” or “I Miss My Mommy” or other fancy names. All riders wearing black. And drinking beer. And riding up and down the street. Loudly.

Across from the bar and the Harleys was, weirdly enough, a cheese store that specialized in Gouda. Only Gouda. Ten types. That you could try and purchase (which we did and did). And then walked back outside to see more harley dudes/dudettes riding up and down the street.

Back to the boat for afternoon nappy, then dinner and a late night walk to an ice cream store for dessert. Tomorrow would be an early day; we were heading to Manitowoc for four days and we wanted to get an early start before the weatherperson’s predictions went sideways once again.

2 thoughts on “Forecasters suck and the heartland of Wisconsin: Kewaunee (8/5/17)”