We knew we were going to be in Manitowoc for a couple of days, so a week ago I contacted Gary, the service manager at Manitowoc Marina, to see if he could help us with some maintenance issues. We needed (in no particular order) to get our battery monitor installed, someone to look at our ever running fridge, and haul our boat out of the water so I could change the oil on the outboards engines lower unit. And while we were here, I would replace the O rings on our hatches to see if that would stop the slow leaks we had in both bedrooms. The windows directly above each bed would drip water onto our beds in bad rainstorms. It appeared to be coming from the window handles, so I ordered some O-rings which grandpa Chuck delivered.

Everything besides the lift-out of the water went just fine. Electrician came onto boat over two days and installed battery monitor. And blew only one fuse in the process. The result is that now we can see when we need to run our generator (while at anchor for multiple days) and for how long we need to run it instead of guessing at the state of charge of our batteries. O rings went in on all our main hatches over two-three hours on Tuesday and after two rain storms it appears that the problem is solved! Rain came in one window, but that was due to the fact that the hatch was OPEN during the rain storm. And fridge dude came out here and said everything looked good. I’ll take a look at installing another fan by our compressor to see if we can draw in a bit more air. But that is a ‘later’ project. 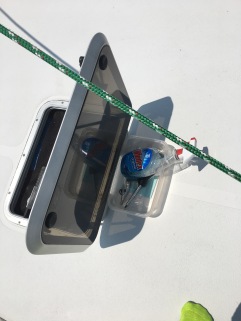 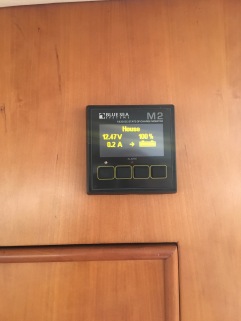 The haul out and lower gear unit oil change was the challenge. Went to talk to Gary on Monday morning when he got to work. He had two jobs ahead of us and thought that they would get to us Wednesday, Thursday at the latest. Probably earlier. Which was good–we were staying until Friday–just needed the lift. I watched the first job get done on Monday morning; pulled out a Hunter to get waxed. Then pulled out another boat at lunchtime on Monday. And that boat stayed in the lift until Wednesday afternoon. The job was to replace the rudder. The rudder was scheduled to come in on Monday at lunch, but didn’t arrive until sometime late Tuesday/early Wed. So the boat and the lift stayed occupied. Talked to Gary on Wed and we were good for Thursday morning.

Except Thursday morning a south wind had come up and it wasn’t light and refreshing. It was 10mph at 6am and building throughout the day. More importantly, it was blowing sideways across the opening of the 21’ well. Into which I was going to have to drive our 19’ wide home. I told Gary that I was waving off the lift. Even if I got it in the well, coming out in the afternoon when the wind was (it turns out) whipping across the marina was not something I wanted to do. So it was time for the change of the engine oil on the boat while in the water. This is the less preferred way. You see, if we pull the boat, I can access the lower unit bolts from the bottom with a small ladder, or just standing upright if the boat is low enough. Everything is right at eye level. It takes about 1-2 hours from time we leave the dock to the time we get back into our slip. But the convenience has a cost. About $370 to pull the boat out of the water and put it back down. The alternative way is to create a lift on our boat, disconnect each engine (one at a time), lift them straight up, drain oil, put back down and reconnect engine. Cost is nothing other than time. Time is as long as it takes me with all of my **sarcasm alert** “vast technical expertise” to get the engines disconnected, raised up and put back down and reconnected. Potentially days. And I get hives when I have to do manual labor. This should be fun.

Before we left on our trip, I had found out how to setup the rigging system on a PDQ though a great blog of an owner of a 34 foot sailing cat. Had almost everything on board. Almost. Which meant that on Thursday morning Jan and I were running to the store so I could get the correct pump for the oil bottle that I had on hand. And which meant that at noon I was running back to Menards to buy a impact screwdriver (the tool of the day) to remove the *(^&@*#&$^( lower bolt. 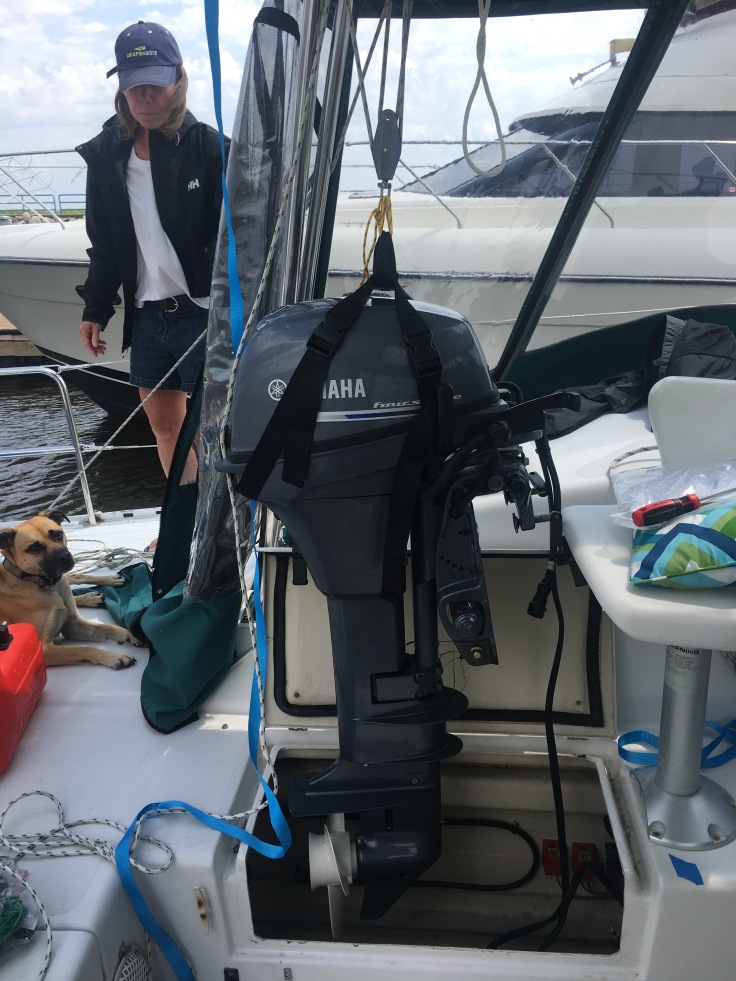 Started working on the port engine at 1000 in the morning and by 4pm I was complete. Six hours for one engine. And one run to the store. The good news? It was done. Only issue was getting the lower bolt off. It was stuck good, thus necessitating the run for an impact driver. And as an added bonus, I had only lost one piece (which I replaced) and had NO EXTRA PARTS!! AJ and I headed off to see Brian and Sara Stout in the evening and on Friday we were back at it. Starboard engine which took three hours and no lost pieces! Good to know we can get it done if we don’t have a lift.

Tool of the day: The one thing that made this whole endeavor successful was the impact driver. The lower bolt on the port engine was STUCK HARD! My wimpy little screwdriver was doing nothing but starting to strip the screw. WD-40 and PB Buster weren’t able to penetrate to loosen up the bolt. I didn’t have blow torch on hand. So quick search on google (and what did we do before google) gave me a potential solution. Ran to Lowes but they didn’t have one. Then Menards and found it. Back to the engine. The key was the large bit that fit the entire screw head and the handle of the driver that let me put a vice grip on the handle to get some extra leverage. Five minutes of grunting and it broke loose.

If you ever want to do this yourself, here is the running parts list:
2 each 2×6 boards
2 cargo straps
1 rope for block on board
1 rope for engine harness
2 each double pulley blocks (one for board, one for engine)
1 line for pulley system
2 D-rings or shackles to connect to blocks
Board to cover engine well and to put old oil container on top of
Container to catch old oil (1 liter is good for lower units)
1 liter of lower unit oil
Engine harness: use extra strap for extra security
Pump for lower unit oil that goes in quart container
Adaptor for lower unit (to connect pump to yamaha engine)
2 each 12mm wrenches/ratchet to take off engine mount
Needle nose pliers (take off clutch/throttle cable)
Zip ties (replacements)
Wire cutters (to cut/trim zip ties)
Rags/drop cloth

Put number of local yamaha mechanic on speed dial.
Put piece of duct tape over the drain hole in the bottom of the well. Because EVERYTHING will fall through that hole.
Place boards above engine on hard top.

Remove bolts securing engine to boat
remove clutch and throttle cables: Make sure to mark position of the nut, lift up on plastic tab to remove cable and MAKE SURE YOU LIFT UP ON THEM WHEN YOU PUT THE CABLES BACK ON!
Remove zip strips and detach yamaha connector from engine. Safety hint: Don’t cut cables.
Turn off fuel; remove fuel line from engine
Put engine harness on engine. Make sure straps are threaded correctly so the engine doesn’t fall on your head when pulled up.
Attach rope to harness; add d-ring and block.
Run line through pulley system and take up slack (don’t pull) and cleat.
Get Jan or AJ to pull in line.
Loosen engine bolt fly wheel from boat. Check to make sure NOTHING is connected.
Slowly bring up engine; make sure clears well. If anything pulls IMMEDIATELY STOP and find out why.
Bring all the way up to hard top (within a foot). This gets the bolts within reach.
Put board in well; cover up entire hole. Put rag over board
Put catch container under outboard
Remove top bolt. Change gasket
Remove bottom bolt. Make sure have gasket; change.
Drain oil
Connect tube to lower bolt hole; put into quart bottle. Pump until level reaches top hole
Replace top screw
Remove pump type and replace bottom screw
Clean off engine; remove oil container
Remove well cover
Jan or AJ lower engine
Screw in engine bolts; not too tight
Put in bolts and tighten
Tighten engine bolts
Reattach throttle and choke cables. Open the gate!!! And don’t lose (another) pin
Reattach yamaha cable
Reattach fuel cable
Remove pulley block from engine
Remove harness from engine
Remove duct tape from drain hole in bottom of well.
Turn back on fuel
Cross fingers
Fire up engine
Check to see goes into gear and throttle is working
Relax