Our ride today was a relatively short one. Just a bit over 20 miles down the Green Bay to Fish Creek, WI where we would stop at Alibi Marina (motto “Small but expensive”) for the day and explore Fish Creek (population 997). The forecast? Winds from the south west at 10-15 knots with waves forecasted at 1-2 feet. We would be heading southwest, to into the wind and the waves. We looked at the timing and it looked like we would have a couple hours in the morning of light winds so we decided to get out early and get under way.

When we awoke, our little slice of heaven had a breeze, but the water was flat. Of course, we were in a well protected harbor, and probably should have taken that into account. We threw off the lines, headed away from Washington island, passed through Death’s Door and started on our way. Wind was right at 10-15 mph in our grill. And waves were 1-3 feet. Our forward progress went from 6 to 5 to 4 mph. And our motion had a lot of up and down. Nothing dangerous by any means, but certainly not comfortable. AJ complained from his front cabin that he was having difficulty sleeping.

So we adjusted. The Door county peninsula has a lot of harbors and bluffs that provided protection from running directly into the winds/waves and we could tuck in pretty close so instead of taking the most direct route and getting the snot beat out of us, we cut over to the land, upped our total distance and also increased our comfort level.

We pulled into the bay outside of Fish Creek at 1125, called Alibi Marina and checked to see if our slip was ready. It was not–the previous tenant had until noon to check out. So we dropped anchor and ate a quick lunch then moved to our slip along the wall. Alibi marina is very nice and very small and there were a lot of boats crammed into that small space. We were put alongside one of their docks and the front half of our boat was in a well formed by the marina dock and a dock that rented pontoon boats and jet skis. The space for the pontoon boats to get out? About 2 feet wider than the actual pontoons. We expressed concern but the dock master said “No problem; we do this all the time. The rental company will walk the boats around. It will be easy. Trust us.” Fortunately a pop-up thunderstorm came up quickly and shut down the rental operations for the day. 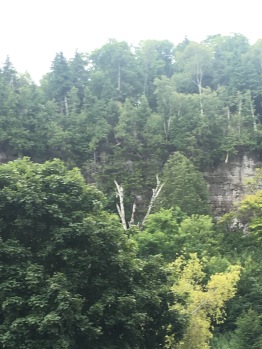 Jan went into cleaning frenzy while AJ and I hid down below to stay out of the way. Then we went to explore town. Fish Creek isn’t big but it has risen into the top two to three places on our trip. The people are super nice the stores are cute and the scenery is gorgeous. The town is on the water and behind the town are huge bluffs that rise straight up hundreds of feet. On top of the bluffs, should you want to walk up the hill, the country opens into wide farm lands with fields of strawberries, grapes (for the local vineyard) and the typical Wisconsin crops. 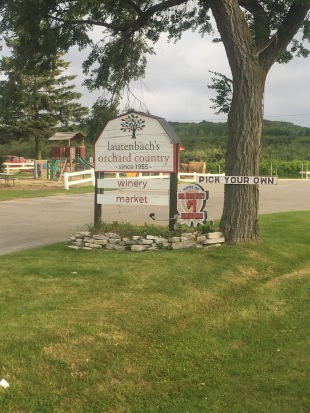 We returned to the boat by 1645 so we could shower and be at Pelletier’s Restaurant and Fish boil for our 1730 seating for our 1800 fish boil.

What is a fish boil, you ask? I assume it is an eastern Wisconsin thing because where I grew up on the west side, we had fried fish but no boil. It is a method of cooking fish to feed large groups of people in which one takes an open fire, places a large pot of heavily salted water on to the fire, adds potatoes and onions and boils for 20ish minutes. Then add big pieces of white fish caught fresh from Lake Michigan and boil for 10 ish minutes. And then, and this is the key, take a coffee can half full of diesel fuel (nope. I’m not kidding) and throw it into the fire, creating a huge and spectacular fire ball. What actually happens is that during the cooking process, the fish release their oils and it rises to the top of the cooking pot. When the fuel is added to the fire, the pot boils over (thus fish boil) and the fish oil spills over the pot and then the fish is done.

You get there 30 minutes early so that you get to see the entire cooking process, culminating in the boil over at 6pm. We were there on time, got our tickets and headed to our outside table. The fire was going and potatoes were already dropped in the water. We talked to the boiling dude for awhile and then they brought out the basked of fish. That was placed in the boiling pot and more talking. Then boiling dude walked over and grabbed a coffee filled with fluid and showed it to all of us–it was diesel. Quite the refined cooking process this fish boil.

BD (Boiling Dude) warned us that we probably wanted to step back–it may be a bit warm. AJ and I both step forward because we are not bright. BD throws the diesel into the fire and there is a HUGE fireball, it is, as advertised very hot, AJ and I get second degree burns and step back. Like 10 steps back. Flames die down and the basket is pulled out and whisked away to be chopped up and put on plates. Back to our table.

Then the food is served to you; potatoes, fish, coleslaw and onion. And if we are being honest, we didn’t have high hopes and we had an alternate, just in case. We were told

that the pizza place in town was awesome and our plan was to hit the fish boil, see the show, pick at boiled fish (because how good can that be?) and then go get pizza. But something funny happened on the way to the pizza place; the food was great! Plus they served cherry pie and ice cream to top it off! We ate it all and no room left for pizza.