After we got back from the beach on Monday afternoon, the crew from Miss Bailey (another looper boat) asked if we could leave early on Tuesday morning. The passageway that Miss Bailey has to transit to get out into the bay was clogged by our boat and by the Beaver Island Ferry. And the Ferry wasn’t moving. We did a quick consult and we agreed to leave at 7ish in the morning. Miss Bailey had a long day ahead of them, we had a shorter day, but the conditions tend to be better early, so no problem.

Miss Bailey passing on by…

Beaver Isle Ferry (l) and anielia (r) on the water

So Tuesday morning at 0650 we were throwing off our lines and heading out into the lake for our five hour trip to Charlevoix. We had a reservation for Wednesday night in Charlevoix, but not today, so just before 0800 I called to get on their waiting list for today. And by 1100 we got the call back–we were in for two days! Anielia left 20 minutes after us and passed us sometime enroute to Charlevoix and we ended up catching them at the entrance to the channel where we joined a line of 9 boats waiting for the noon lift of the Hwy 31 bridge.

Charlevoix is a small town that is sandwiched between three lakes: Lake Michigan, Charlevoix and Round lake. The canal connects Michigan to Round Lake and that is where there are a couple marinas. Then another short canal to Charlevoix Lake–a huge inland lake.

At precisely 1202, the bridge went up and we all went under the bridge into Round Lake where all the boats stopped immediately to either get fuel or get a slip at the municipal marina. Our destination was the marina but we decided to head out into Charlevoix lake and let the chaos settle. We puttered around in a big circle and headed back to the marina and were docked by 1220 sharing a slip next to a 42 foot motor boat. The dock hands that brought us in were all our age (normally you get an 18-20 year old) and it was the best experience we have had to date.

The marina itself is pretty small–three docks with boats on both sides. But they had the boats PACKED in to maximize the space. And unlike other marinas we have been at, the boaters pulled out chairs and were sitting on the back of their boats or on the dock and socializing. It appears that since there are only about three weeks of good weather in the summer up here, they maximize their time by staying outside when the weather is nice!

We did our ‘marina chores’ (laundry, clean boat, showers/personal hygiene) and then headed into town to explore. Charlevoix is a really cute tourist town. Couple fudge shops and ice cream shops (naturally) but other nice stores as well. The waterfront has been nicely developed with a terraced grassy area perfect for frisbee (as AJ and I can attest to) and for picnic lunches, an amphitheater for music (they had a band playing on Tuesday night) and a small water fountain for kids to play in when it is hot. Jan immediately started researching schools and housing costs. We aren’t sure what we thought Northern Michigan was going to be like, but this is fantastic! We hit the bookstore to get some more books for the trip, wandered up to the Lake Michigan beach where AJ and I went swimming. We headed out to dinner and while we waited 45 minutes for our table (did I mention it is a tourist town), we went to look at the mushroom homes.

The mushroom homes are houses designed and built by an architect named Early Young who was ingesting mushrooms at the time. Kidding. They are named mushroom homes because some resemble mushrooms and their horizontal design (not vertical) with wide wavy eaves. They are designed to blend in with the natural environment and are in size from hobbit home (small) to ginormous home. He made over 26 homes between 1919 and the 1970s; most are on the smaller size, but all are really neat to see. And one is for sale if you have over $300K for a one bed, one bath home with less than 1000 square feet. 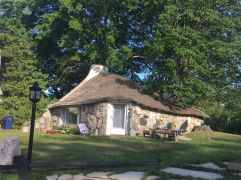 Then off to the Cantina where we had a huge wait for some excellent food. Then back to the marina to watch the local brass band play oldies but goodies like John Philip Souza and the theme from Jaws. We broke out the frisbee and whipped it around the park and then talked to all the people lining the docks on their chairs enjoying the gorgeous night and sunset. This is an incredible place; we take back everything we have ever said about Michigan. This is a little slice of heaven!

Today is a weather day. When we looked out over the long range weather calendar as far back as a week ago, today was scheduled to be very windy with high waves and lots of rain. Which is why we made the reservation for a marina. And at 3am the front moved in which meant another night of running around slamming shut windows as the rain poured in the hatches. We awoke at the crack of 8am and quickly got showered, breakfast and ready to go. The Neals invited us over to their home today and wanted to give us a tour of their town and the local area. We have been so lucky to meet and travel with them over the past week and this was an offer we couldn’t refuse.

Steve picked us up at 0930 and we headed off to our first destination Petoskey; just 20ish minutes from Charlevoix. We stopped at the first West Marine we have seen in 60 days and immediately dropped half a boat unit1 on supplies we needed on the Canadian portion of our trip and which we will probably never need again!

Then to the bakery to get Owen and Cullen a healthy breakfast (bagels) and AJ and I a not-so-healthy after breakfast snack of donut/cinnamon roll, each of which was the size of a small watermelon. Then off to the Neal house. Which is a fantastic home overlooking Lake Michigan/Little Traverse Bay. We spent time with them at the house and then took off in the car to get a tour of Harbor Springs and their home town of Petoskey.

It is now apparent that ‘cute towns’ are not a one off up here in Northern Michigan. Both towns were really neat. Both right on the water with tons of shops and restaurants and places to get extremely unhealthy food (i.e. fudge, ice cream and cookies!). Both towns were PACKED with tourists, even on a rainy Tuesday afternoon. And the people all are super nice, which seems to be a recurring theme since we left New York. We are wondering when we will get out of the land of nice people, and we hope it is a long, long time from now. We bought more books and lots of junk food because that seems to be the staple of our diet. We had a great lunch at a restaurant/pub that was frequented by Ernest Hemingway when he was a young man spending his summers in Michigan.

Then back to the Neal house where we got to use their car to head to a real, no kidding grocery store and stock up on all the items that are too big to carry by hand back to the boat. It was a lot! Then back to pick up AJ and say good bye after a week of traveling with the Neals. This trip, so far anyway, has really been about the great people we have met and the friends we have made along the way!

Tomorrow is supposed to be a better day to get underway and the plan is to head to the Manitou Islands for the night.

1A boat unit is equivalent to $1,000.00. It is much less painful to talk about spending money on boats in terms of boat units. If you thought of it as, say, actual money, you probably would never own a boat. 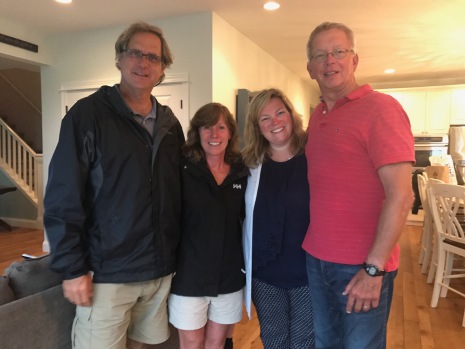 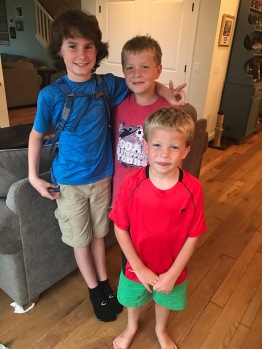