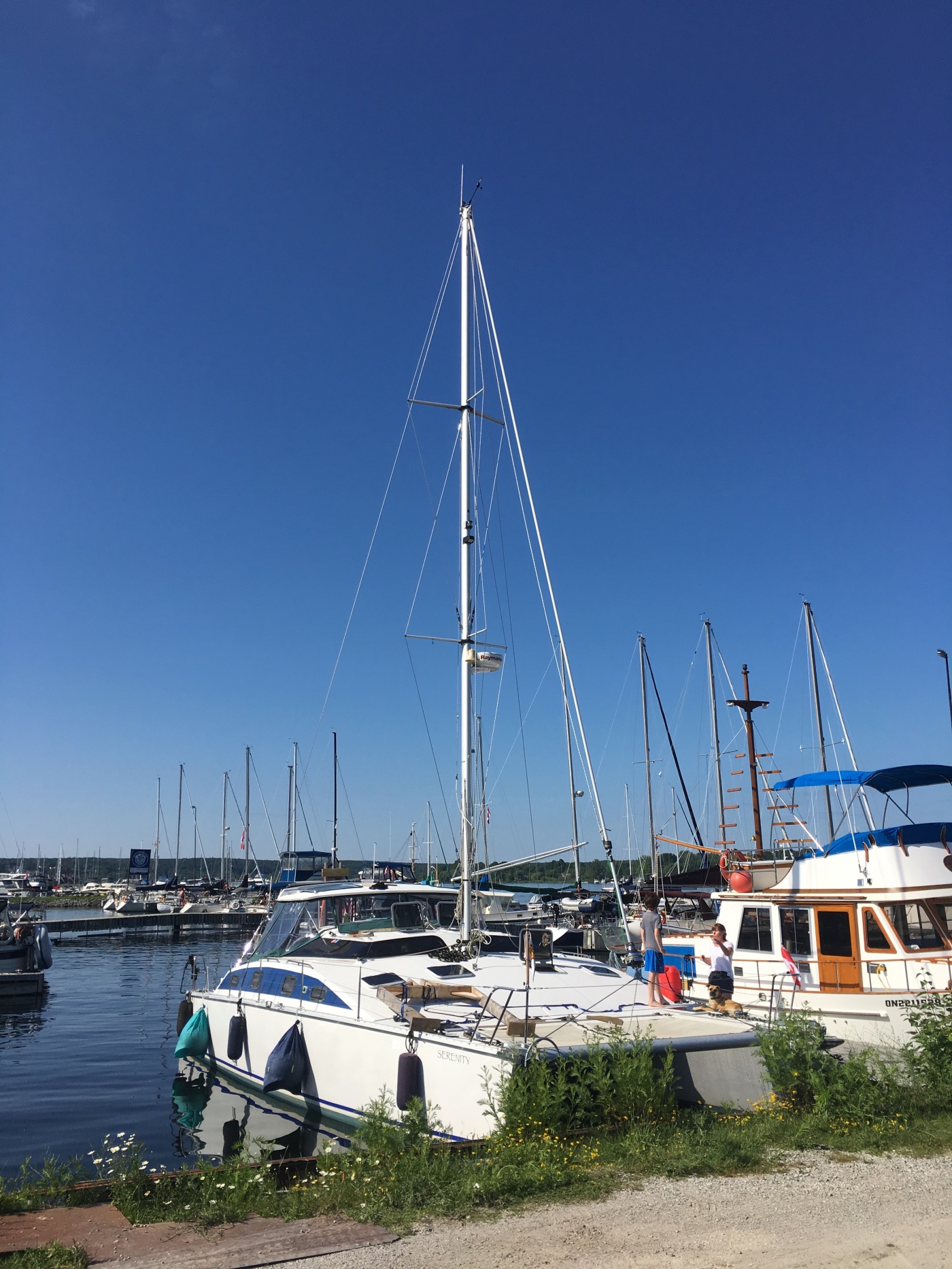 ***Apologies:  This is being posted late.  Obviously we have already made it out into the Georgian Bay, but I neglected to post this and one other.***

When last we left you we were finishing up the Trent Severn Waterway heading for Dutchman’s Marina where we were getting our mast put back on our boat to become a sailboat once again.

When we got to Dutchman’s marina we were wiped. Starting the day with the Big Chute,

then really fast current in really narrow valley, then long wait for a lock through, THEN whipped down faster current in a narrower channel made for a long, stressful day. So when we puttered in to the Pentang Harbor and called the marina on channel 68, we were happy to hear that he remembered we were coming in to get our mast put back on our boat (stepped). He told us to go into the north entrance and he would be on the left. Jan saw him waving and we managed to wedge our catamaran in between a junk hauler and a trawler along side a dirt road. Bob (the owner) told us they would be back at 0900 to put our mast on the boat. First he had to make sure that his pole truck was working. His yard had a lift for monohulls, but our wide beam (width) wouldn’t work in his 15 foot well, so the truck would have to do the work on our mast from shore. He was confident. I was too tired to care. We got power hooked up, took a shower and went to bed.

5 July we were up early. We began taking apart all the pieces we had cobbled together over the past month to hold our mast on the deck of our boat. Bob, George and Brandon arrived at 0850, truck working just fine. By 0900 they had our mast hooked up and by 0945 everything was complete. We were a sailboat once again. Now our work began. 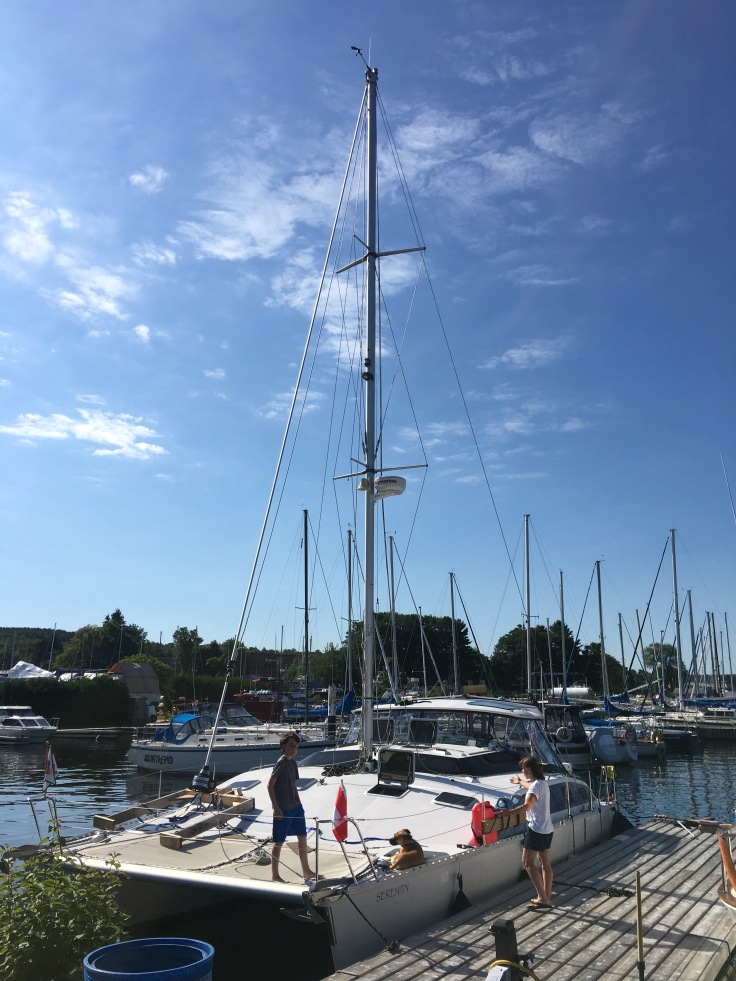 We pulled out our sails from deep in the lockers where we buried them a month ago. And we had to find the bag with the ropes. And we had to find the bag with the various pieces of hardware. We started with the easy sail, the genoa. Which took us two hours in the hot sun to put up. Then we realized we dorked up the lines and had to rerun. We also tried to change out the furling line, but I stripped the screw so that wasn’t going to happen this trip. We broke for lunch and came back to tackle the main which took the rest of the afternoon. By the time dinner time rolled around, the sails were up, we were hot, sweaty and pissed off at each other so we took a swim at the beach next to the marina and headed into town for dinner. Told Bob we would be leaving the next day and he rang us up. $157 for the mast stepping and zero dollars for anything else. Best deal we had on the trip.

Next day up early, borrowed the courtesy truck to head into town to buy groceries for the next week, loaded everything up and headed out into the bay for a test sail to make sure we got everything right. It appears we did–all went well and we turned around and moved to the marina next door to Dutchman’s for the night. We needed to do laundry and AJ was needing some wifi before we took off into the wilds of Canada. As we pulled in, we topped off fuel and diesel and removed the waste out of our holding tank. Then puttered to our slip assignment. And got a reminder at how friendly the people here are. As we moved through the marina we had no fewer than three people ask us if we needed help docking, which included one woman who was jogging down the docks to keep up with us to see if we wanted a hand. If we were in Maryland people may have lined up to watch the show, but probably not to help!

We made some dinner, relaxed and planned our first day on the trip. Tomorrow–Georgian Bay!!