We wake early with the knowledge that our house (in the shape of a boat), which contains all that we love and all that we have in this world, is going to be taken out of its natural environment (the water), put on a train, carried over a road and down a hill and put back into water.

The Big Chute was a temporary solution to getting the waterway over a really big hill. Temporary until the dam and lock was complete. Which was (at least until today), never done. The Big Chute is a very fancy railroad car into which one drives their boat, the car is lifted out of the water, your boats sit on the car itself, and you are sent over and down the hill to the waiting bay where you can continue on to the last lock. Most smaller boats simply rest on their keels, but bigger boats may need to use straps to hold them in place. There are lovely signs reminding the boat owner that they (the owner, not Parks, Canada) are responsible for any damage should your boat, say, slip off the back of the rail car. The old rail car was used for decades and is still on site. In case needed apparently.

0900 is kickoff time for the locks to start working which gives us a solid three hours of worrying. We watched the train car take a bunch of watercraft of all sizes from jet skis to 50 foot motor yachts up and over yesterday. But knowing that it would be our turn was making our bowels a little watery. Literally. I sprinted to the bathroom in the morning and it was touch and go if i would make it. At 0830 we followed Endeavor over to the blue line (ready dock). We were the first two. Endeavor was called up first so we got to prolong our agony by watching them go up an over. And we assumed the arrived safely because the car came back for us.

The process is pretty straightforward assuming you can get your wide boat into a narrowish lift. They called us forward, and we went in where they told us (back right). The plan, the explained, was for our rudders to hang off the back of the lift to as not to damage them. Our boat would rest on the keels, assuming that our keels could keep us stable. We pulled in, they positioned us where they needed us and then slowly lifted the chute. Once we were on the keels, they stepped on our boat and pushed down and our stern went down and our bow went up and I crapped myself. Our keels would not keep us stable and if we went as planned we could drop off the back.

But it isn’t the first day on the job for our intrepid Parks Canada crew. We moved the boat forward so that two lifting straps were in place on the back end, lifted our back end and then popped us up out of the water. The rudders cleared (by 1/4 inch) and we were stable. The four of us (Jan, myself, AJ and Lucky) moved to the front of the boat to enjoy the ride. And it was fantastic. It wasn’t fast, though it seemed so. It certainly wasn’t smooth (lots of braking to keep us from crashing down the hill). And then it was done. We were in the water. Looking at each other while the nice people from the big chute reminded us that we needed to start our engines and get the hell off their car. Which we did.

And off we went! We were relieved and excited and overcome with the feeling that we had just escaped death. And very quickly realized that we had spent so much energy worrying about the Big Chute, that we hadn’t spent much time on what comes AFTER the chute. Like say a very, very narrow, rocky channel with fast current. Which got our heads back into the game.

We made it to our final lock of the day and of the Trent Severn, Lock 45. It was very busy. We tied up on some docks and watched the process and looked at the current at the exit. There were warnings about the narrow channel and the current and it did not look pretty. After lunch we locked through and the channel was about a foot narrower than our boat combined with my experience. Which exhibited itself when we bounced (gently) off a green navigation marker.

And then we were done! Off for a two hour ride to the Dutchman’s marina where we are going to get our mast put on in the morning. And where we can relax and enjoy the end to the Trent-Severn Waterway and begin to look at the next section, the Georgian Bay and North Channel. 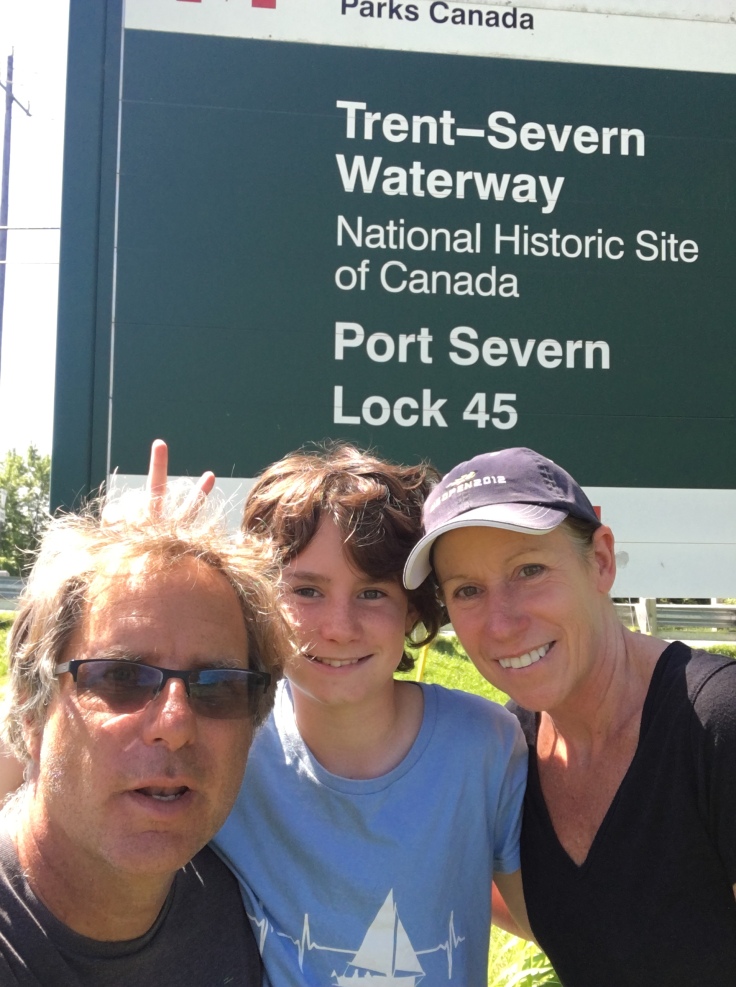