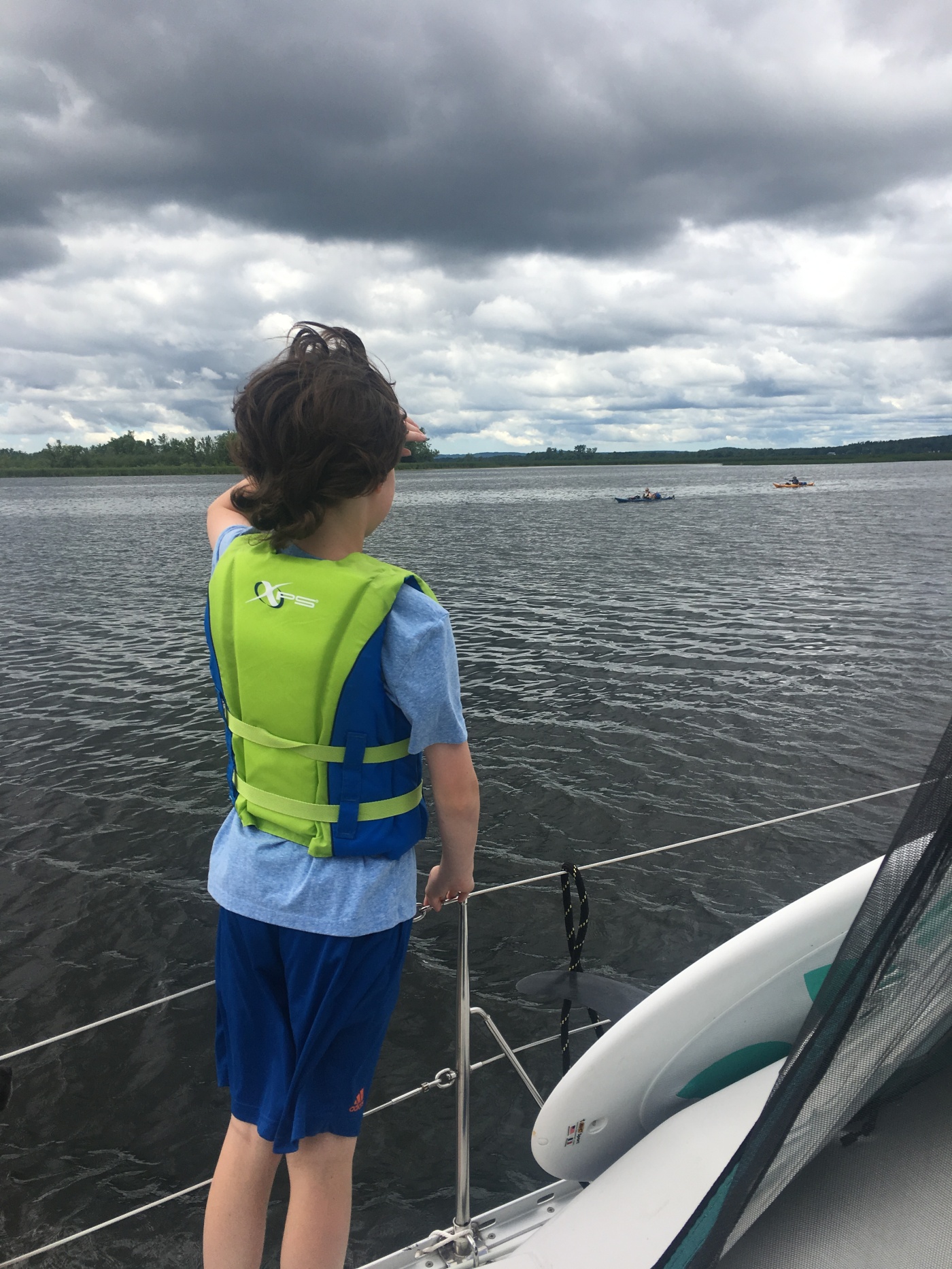 We get to sleep in a little this morning. Locks don’t open until 10am. Our first lock of the day (Lock 7) is a little over an hour away (seven whole miles). We get up, light breakfast, one last use of the free bathroom that isn’t a part of our boat and we are off by 0826. But slowly. Because we are in a mess of seaweed which has gotten in/around our props and we aren’t making much speed. So Jan takes the wheel while I lift one engine at a time, reach down with our salad tongs to get the seaweed from around the props (three guesses on the tool of the day).

jam on the Trent-Severn Waterway. Two boats are already at the lock. A bit unexpected since we didn’t see anyone pass us the previous afternoon and there aren’t that many good placed between lock 6 and 7 to stay. When we tied up, we found it was two looper boats that we and met/seen in Trenton who had left the day before us. One of them had engine problem after lock 6 and they had stayed together anchored up until the problem was fixed. While we were talking, another boat puttered around the corner and now there were four of us waiting.

The lock isn’t that big, so the two boats that were there first went in and we took the second trip through. Lucky was the big beneficiary–he and I were standing watching the procedures and every time one of the lock dudes passed him by, he would get a treat! We went through with a small trawler from Ontario and would spend the rest of the day with them.

We are back in the land of the wavers. Every time we passed someone, whether they were on a lock, in a boat fishing or motoring along, on shore walking or fishing or hanging out, we got a wave. Even when we went a bit close to a fishing boat that would have earned us a one fingered salute in the chesapeake, we simply got a nod and wave of a couple of fingers.

Went through six locks and the same pattern from yesterday; one young and one ‘older’ person. Lots of talking and banter while we are coming up to the top of the lock. And almost all of them said “Well…I’ll go open the lock door for you” and then would walk to our buddy boat and start to talk to them for another five-ten minutes. This is not a place that is in a hurry. The most impressive locks were 11-12. These were the last two locks of the day and we almost missed getting in the locks because it was close to the 1600 closing time. The locks are back to back. So you go into 11, the fill the can, the doors open and you move directly into 12. The back doors close, 12 fills and away you go. It was very impressive. And, true to form, we left our signature on the wall when I rubbed the anchor on the starboard side wall. The winds really swirl in the bottom lock and when we entered, the force of the wind pushed us away from the wall and into the middle of the lock. So I had to angle the front in much steeper than usual and that led to the now familiar sound of rubbing the wall.

Once out we puttered another mile into Campbellsford, Ontario and tied up behind Endeavor on the town lock wall. About $1.50/night USD per foot with third night free if you stay two. Looking at the weather, three nights may be in our future.

In Campbellsford there are five great looper boats (including ours) plus the Canadian trawler. Don and Peg invited us over for dinner (spaghetti) and then we went out and listened to free music in the park with the other loopers. Then we adjourned to the Endeavor for a rematch of a card game. Don won. Again. Time to find another game!

Music in the park. Lots of silver hair out there.

Tool of the day.  As mentioned, the salad tongs.  Not only great in the kitchen, but gives you that extra foot of reach you need to clean the seaweed out from around the engines! And, as an added bonus, you can use the seaweed later that night if you run short on salad!