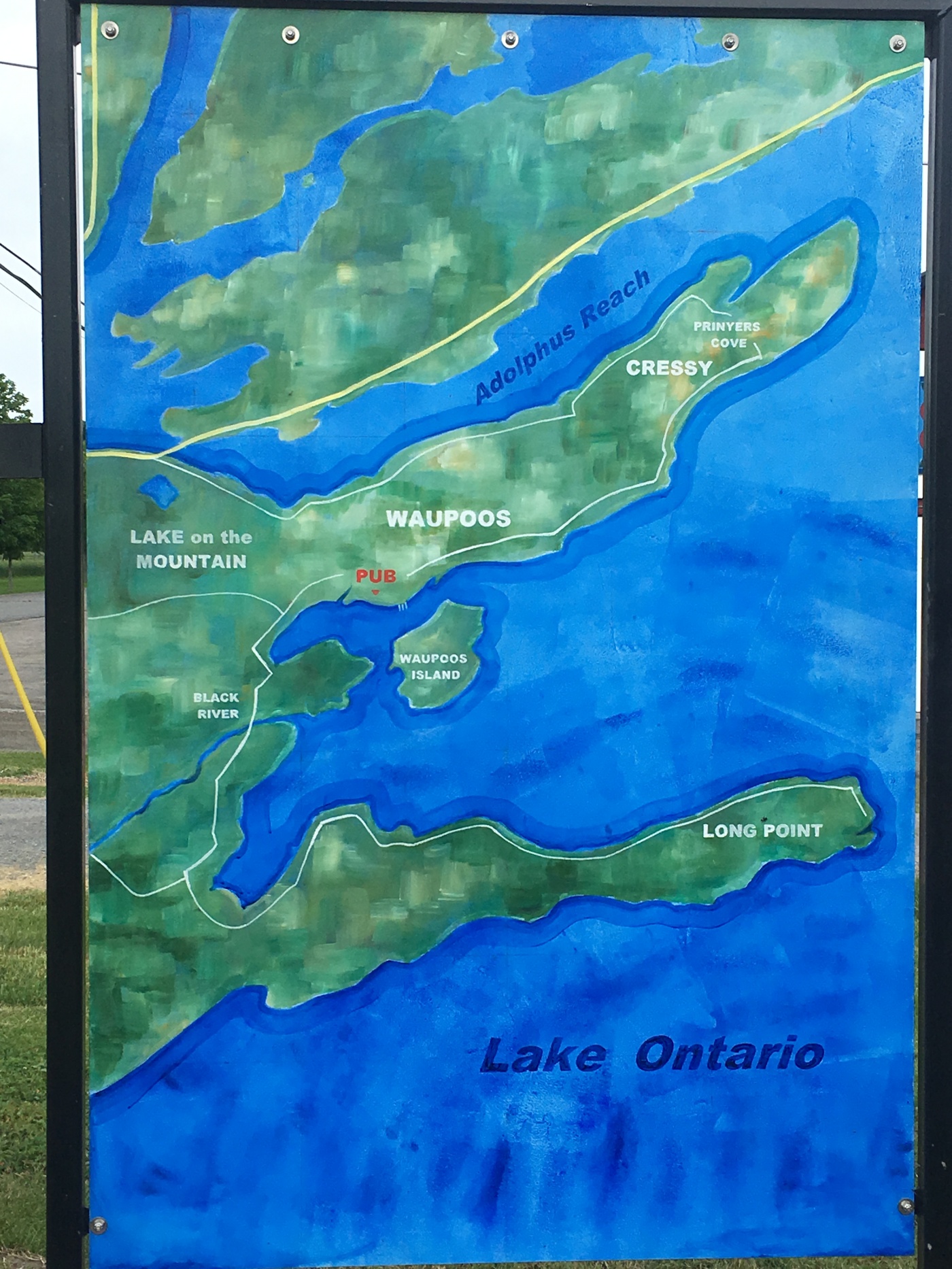 Never been known to really think through all the details when I have embarked on a project or adventure. Always figured that the details would work themselves out. Unfortunately (or maybe fortunately), Jan is the same way. And AJ can’t spell details. So our Great Loop experience, to date, has been a ping-pong game from experience to experience, some good, some learning. And some of the stressful ones didn’t need to be quite as stressful.

Today was a perfect example. What was otherwise a rather easy trip up Lake Ontario from New York into Canada was instead a nail biter for six hours.

The plan was to cross Lake Ontario from Oswego to Waupoos Marina in Picton, Ontario. I would have to check in with Canadian customs from the marina (as designated area) and then we would be free to move about the country. We were traveling with Don/Peg in Endeavor. We have been watching the weather for the past week or more looking for a good day to make the 45 mile trip. 30 miles of which were across a really big, really deep lake. We need a day that has no waves, no wind. No weather, really. Because, as you well know, our mast which holds our sails which makes our boat go really fast (sailboat fast anyway) and make it handle well on big lakes, is currently laying on top of our boat.

And this is where my ‘fly by the seat of the pants’ mentality comes back to bit us in the rear end.

About 17 days ago, we were in Hop-O-Nose Marina getting our mast taken down. We had spent exactly zero hours (or minutes) worrying about HOW we were going to carry the mast on the boat. The three dudes from the marina were extremely helpful in either building from scratch OR pulling out some old stands and putting on our boat to hold our mast. I was pleased as punch! It was going to be awesome for our travel through the canals! But. Maybe not so much for an open water crossing. And that is what I didn’t think through.

Which brings us to this morning. Forecast for today was for 10mph or less winds from west, turing to North winds and dying by 3pm. Waves were one foot in the morning and dropping down by 11am. A slight chance of rain. We looked at all the models and it looked like a plan to leave early in the morning and get to Canada early afternoon would work. It may be a bit bumpy early on, but it would smooth out.

We were up early. Don was puttering out by 0530, we were 10 minutes behind. We cleared the rock wall and it wasn’t too bad. The winds were higher than expected and we had some waves but nothing that was rocking the mast. But instead of conditions improving, they got worse. Rain started about an hour into the crossing and with it came an uptick in wind and waves. Our mast was doing a shimmy and shake as the waves pushed us laterally. We caught a break and actually smiled and then the next bit of rain came in, this time with more wind and the waves started to get whitecaps. We were officially NOT HAVING A GOOD TIME! 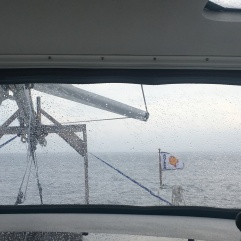 Where is the rain and wind coming from 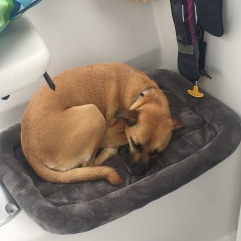 Lucky is keeping his head down

Jan is not happy with how things are going (and she is driving!!)
Let’s be clear. These were not horrid conditions. Had we a sail, it would have been fun. Had we no mast, it would have been OK. Watching the rooty poot stands bowing under the mast? Enough to make you sick. Or make me go back in time and slap my previous self across the face.

Long story a bit shorter: We made it across. By 1130 we were in calm waters of Prince Edward Bay under bright sunny skies. The sun only lasted a little while, but it made all the difference.

We stopped in the marina and I called Canadian customs, talked to a very nice woman and in five minutes we were done! The amazing part (other than the beaurcracy taking only five minutes) was that I used an actual pay phone in a phone booth to make the call. Me and a thousand spiders actually made the call.

And as soon as I finished, a rain storm moved in and our plan to anchor out was immediately changed to staying in the marina. Not the nicest place we have stayed at BUT it has clean showers, people are nice and it in the middle of some gorgeous country which we explored in the evening when the sun came out. And, as an added bonus, we didn’t have to leave and get wet getting under anchor. Fair weather boaters all of us!

Next two days will be spent traveling to Trenton, Ontario for the beginning of the Trent-Severn waterway. A 240+ mile waterway between Lake Ontario and the Georgian bay with a ton of locks and scenery.

coming into the bay… 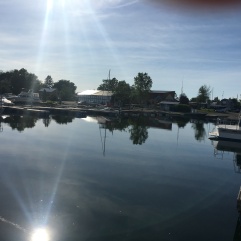 Evening at the marina 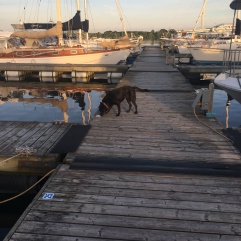 Lucky has a friend.

Canada, On the trip, Oswego Canal